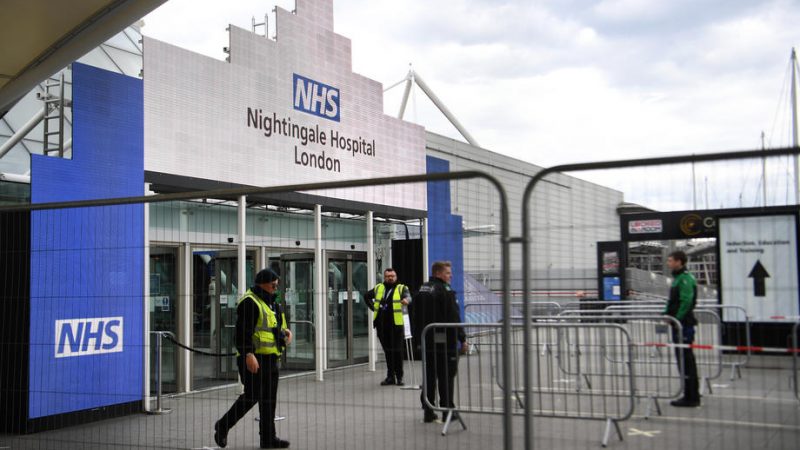 The UK opened its first emergency field hospital to combat the coronavirus pandemic on Friday (3 April) but the government continues to face growing criticism about its plans to increase testing for the virus.

NHS Nightingale Hospital is able to hold as many as 4,000 patients and is the first of a series of conference and sports venues to be converted into emergency field hospitals to treat patients with the coronavirus.

At the site at the ExCel centre which hosted events at the 2012 Olympics in London, the Nightingale hospital will care for patients with the virus in intensive care who have been transferred from other London hospitals.

Others sites being rapidly converted include the Scottish Events Campus (SEC) in Glasgow, which was due to host the now postponed COP26 climate change summit in November, as well as Cardiff’s Millennium Stadium and the NEC arena in Birmingham.

But Boris Johnson’s government is facing mounting criticism about the lack of clarity with its plans to increase testing for coronavirus, having set itself a stiff new target of 100,000 tests per day by the end of April.

On Thursday (2 April), Health Secretary Matt Hancock set the new target but then later admitted that the 100,000 could include both swab tests, that check if someone has the virus, and antibody blood tests, to check if someone has had the virus recently – but which have not yet come into widespread use.

However, the Institute of Biomedical Science (IBMS) complained on Friday that the UK “did not have a testing strategy” and that the government’s initial approach of isolating vulnerable groups and allowing most people to build up herd immunity “was not backed up by the public health or clinical community and it put us on the back foot regarding supply chains and global demand”.

The IBMS statement also insisted that “we are testing to the limit of our materials and that we are ready to increase capacity – but only if we are given what we need”.

The government’s target by mid-April had been to test 25,000 per day but the health service currently only has capacity for 12,799 daily tests in England.

Access to testing has been made tougher because 35,000 NHS staff are currently off work because they or a member of their household displayed coronavirus symptoms, while the Royal College of Physicians has estimated that one in four doctors are currently self-isolating because they are considered to be at high risk.