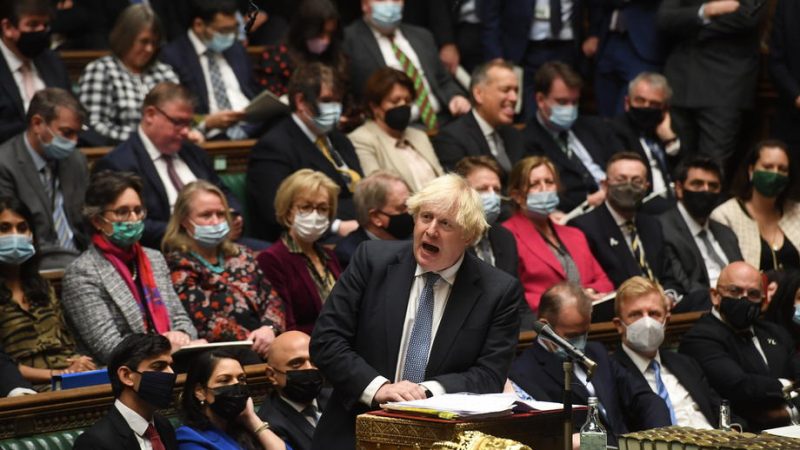 A handout photograph released by the UK Parliament shows British Prime Minister Boris Johnson (C) during the Prime Minister's Questions (PMQs) at the House of Commons in London, Britain, 8 December 2021. Johnson faced questions amid allegations that Downing Street staff held a party during the Covid-19 lockdown on Christmas 2020. [Handout photo/EPA/EFE]

Hours later the main aide featured in the video, Johnson’s press secretary at the time, Allegra Stratton, resigned as an adviser to the prime minister. In a tearful statement, she said she would regret the remarks she made in the video for the rest of her days.

"I will regret those remarks for the rest of my days"

Allegra Stratton gives a tearful statement as she resigns as government adviser, after she was seen in video joking about lockdown Christmas party at No 10https://t.co/xr1lLgIXwI pic.twitter.com/Idqbe5vgtO

For more than a week, Johnson and his team have repeated that no rules were broken in late 2020 after the Mirror newspaper reported there had been several parties including a wine-fuelled gathering of 40 to 50 people to mark Christmas.

On Wednesday, Johnson told parliament that he was furious about the video, which was first shown by ITV late on Tuesday, but said he had been repeatedly assured that no party took place at Downing Street, his office and official residence. 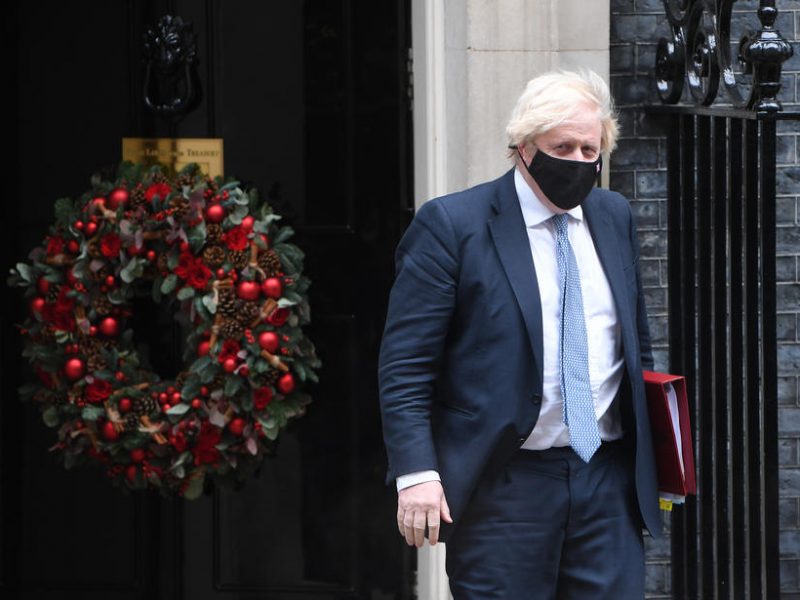 Allegra Stratton must not be made to carry the can alone. Where are the resignations of the others at the parties, the mock press conference, and those in power who knew?

Above all, after all the lies, sleaze and corruption, Boris Johnson must resign – or be removed from office.

It is the latest misstep by an administration which has been criticised over its handling of a sleaze scandal, the awarding of COVID contracts, the refurbishment of Johnson’s Downing Street apartment and the chaotic evacuation from Afghanistan.

Amid reports that the government could implement tougher COVID-19 measures as early as Thursday to slow the spread of the Omicron coronavirus variant, news of the scandal could also discourage people from following any new rules.

“I apologise unreservedly for the offence that it has caused up and down the country, and I apologise for the impression that it gives,” Johnson told parliament.

Disciplinary action would be taken if it was found that rules had been broken, he said.

“But I repeat … that I have been repeatedly assured since these allegations emerged, that there was no party and that no COVID rules were broken.”

He also pledged to “get on with the job”, accusing the opposition for trying to “muddy the waters about events or non-events of a year ago”.

After days of denials, the video aired by ITV showed Stratton at a 2020 Downing Street rehearsal for a daily briefing, during which she laughed and joked about a reported Christmas gathering.

In the video, another Johnson adviser asks Stratton: “I’ve just seen reports on Twitter that there was a Downing Street Christmas party on Friday night. Do you recognise those reports?”

Stratton, standing before British flags at an official Downing Street lectern, says: “I went home.” She then laughs and smiles. “Hold on. Hold on. Um. Er. Ah.” She appears lost for words and looks up.

"In that video they're laughing at all of us for being stupid enough to believe they actually meant what they said when they told us we had to lockdown and have tiers 1, 2, 3 and 4 to keep us safe." @JuliaHB1 pic.twitter.com/o4GEdAHIyM

On Wednesday, Stratton made a tearful statement to media outside her house, saying she was resigning from her current role as Johnson’s spokeswoman for COP26 and climate change.

“I understand the anger and frustration that people feel. To all of you who lost loved ones, who endured intolerable loneliness and who struggled with your businesses – I am truly sorry,” she said.

At the time of the Downing Street gathering, tens of millions of people across Britain were banned from meeting close family or friends for a traditional Christmas celebration – and even from bidding farewell to dying relatives.

Nearly 146,000 people have died from COVID in the United Kingdom and Johnson is weighing up whether to toughen curbs after the discovery of the new Omicron coronavirus variant.

Opposition leader Starmer said it was obvious what had happened at Downing Street.

“Ant and Dec are ahead of the prime minister on this,” Starmer said – referring to a popular British comedy duo who have made jokes about the outcry – to loud laughter from opposition lawmakers in parliament.

“The prime minister has been caught red-handed,” Starmer said in an exchange with Johnson in the House of Commons.

Conservative Party lawmaker Roger Gale said that if parliament had been deliberately misled over the party, then it would be a resignation matter.

But another Conservative lawmaker said that while the mood in the ruling party was poor, there was not the strength of feeling yet for a move against Johnson.

Johnson is also facing questions about whether he sought to ensure that pets were evacuated from Kabul during the Western pullout in August while Afghan people trying to seek refuge abroad were left behind.