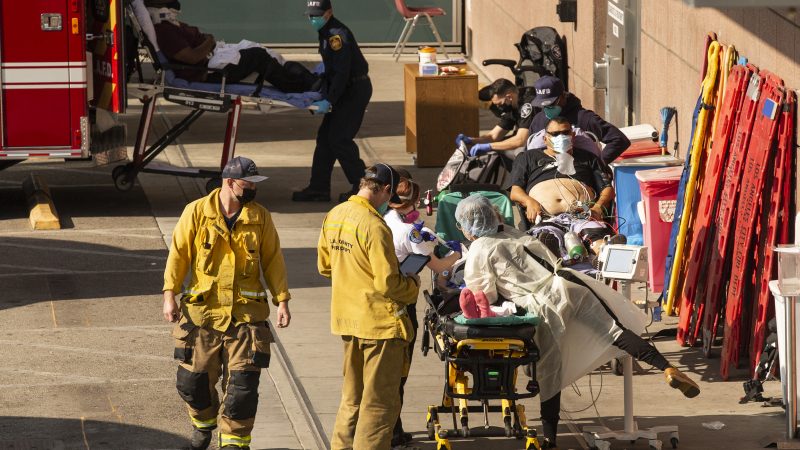 medical worker interacts with a patient brought by an ambulance as patients wait outside the Emergency Room as they are brought in by an ambulance and the fire department at the LAC USC Hospital ER amid the coronavirus pandemic in Los Angeles, California, USA, 5 January 2021. [Etienne Laurent/EPA/EFE]

The United States has endured its worst day of the pandemic, with three Americans dying every minute, as China took decisive steps on Wednesday (13 January) to stamp out a tiny coronavirus outbreak.

Global infections have soared past 91 million, and the spikes have forced governments around the world to reimpose restrictions such as unpopular and economically painful lockdowns, including in Europe which is battling a devastating second wave.

The United States is the worst-hit nation, logging a record 4,470 deaths in 24 hours on Tuesday, as it reeled from a winter surge in infections that has overwhelmed hospitals and clinics in many areas even as vaccines are rolled out.

“It’s most definitely the darkest period of my entire career,” said Kari McGuire, a palliative care supervisor at the St Mary hospital in Apple Valley, a small rural town in California.

“I’ve personally had to watch people that I know, that I care for, watch their loved ones die. It’s been very difficult.”

Coronavirus patients at the overstretched hospital were crammed into hallways, makeshift ICU beds and even the pediatric ward.

McGuire said there were “astronomical numbers” of Covid-19 deaths — the United States accounts for a fifth of the world’s almost two million coronavirus fatalities.

Authorities on Tuesday announced that starting January 26, all travelers entering the United States by air will need a negative Covid-19 test before departure.

Neighboring Canada also scrambled to contain a worrying outbreak, ordering residents in Ontario — its economic engine and most populous province — to stay home.

Ontario Premier Doug Ford warned that the healthcare system was “on the brink of collapse.”

The daily US death toll on Tuesday was greater than the official fatality count for the entire pandemic in China, where the coronavirus was first detected in late 2019.

China largely eliminated its outbreak through a number of strict lockdowns and extensive testing and tracing, but recent weeks have seen a smattering of cases. That has forced more than 20 million people under some form of lockdown in the country’s northern regions.

The government of northeastern Heilongjiang province — home to 37.5 million people — declared an “emergency state” on Wednesday after 28 cases were found, telling residents not to leave the province unless necessary.

China is rushing to inoculate millions using homegrown vaccines ahead of the Lunar New Year travel rush, which authorities fear could boost the risk of transmission.

Japan was set to expand a coronavirus state of emergency on Wednesday beyond greater Tokyo to seven more regions to counter a surge in cases.

While Japan’s outbreak remains comparatively small, with around 4,100 deaths overall, medics say hospitals are under heavy strain from the spikes in the worst-affected areas.