The Brief – Keep the taps flowing 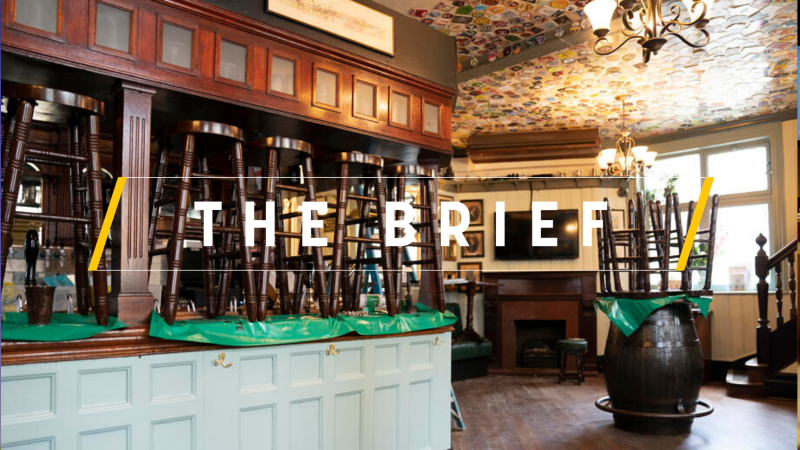 A cold beer always tastes best when drunk with friends after work on a summer’s day. As most of Europe continues to emerge from the deprivations of lockdown, this pillar of basic human happiness is returning to the social calendar.

Restaurants and cafes are also slowly re-opening, to be joined by hotels in the coming weeks and it will soon become tempting to think that life is finally returning to normal and drinking at home to be consigned to memory.

The summer months will offer the hospitality sector some respite from the economic ravages of the coronavirus pandemic, but not nearly enough to allow them to recoup any of the losses incurred since March.

In the UK, for example, around a third of pubs face going out of business in the next year, and the figures are likely to be similar across much of Europe.

Most of the restaurants and cafes who have been offering takeaway services during the last two months of lockdown report that takeaways give them no more than 20-30% of their typical budgeted revenue.

Opening up premises with social distancing will do little to improve their balance sheets. Instead most face far lower turnover and higher staffing costs to cover the extra cleaning requirements to protect against the spread of Covid-19.

Many establishments will not be able to re-open at all unless state-subsidies for staff wages and rents continue at least until the end of 2020.

Most of the hospitality sector cannot survive with social distancing regulations in place. Most wedding receptions and social functions do not involve 20 or 30 guests and most restaurants cannot break if they can only use a handful of tables.

Besides, people can drink outside at social distance in large numbers while the weather stays hot but in autumn and the winter, pubs and bars will have to invest in outdoor heating or else simply shut up shop again.

Any return to normality this summer will be nothing more than a chimera.

Many will quietly go bust and the hospitality sector as a whole will, like many other sectors, have to make a painful assessment of its sustainability.

Governments cannot be expected to save every job, pub and bar. But our pubs, bars and local eateries service a vital social need and community cohesion.

For the sake of human happiness, as well as jobs and livelihoods, the EU and national governments need to ensure that this sector needs to be kept alive until normality really does return.

Russia and the US hope to meet for a second round of nuclear disarmament talks as soon as possible, perhaps already in late July or early August, a US special envoy said after the first negotiating round on the future of the world’s two largest nuclear powers concluded in Vienna.

Airport and airline operators are locked in a spat about whether a rules waiver granted by the EU back in March should be extended into 2021, although a decision is not due until mid-September.

The European Commission will present later this year new rules to develop a “sound” crypto-asset market in the EU, including for stablecoins such as Facebook’s digital currency Libra, financial services commissioner Valdis Dombrovskis.

Large lobbying associations have a strong influence on the German government and there are concerns that this might impact its EU Council presidency, which starts on 1 July, warned a study conducted by NGOs LobbyControl and Corporate Europe Observatory.

The European Commission has applauded efforts by some of the world’s largest tech platforms in stifling the spread of illegal content, in the last evaluation of the EU’s code on countering illegal hate speech online before the Digital Services Act is presented later this year.

Check out this week’s edition of the Transport Brief, including electric vehicle charging boost, big developments in hydrogen and the latest vlog on game-changing ideas in transport.