The Brief, powered by amfori – Rush to promise vaccines is foolish at best 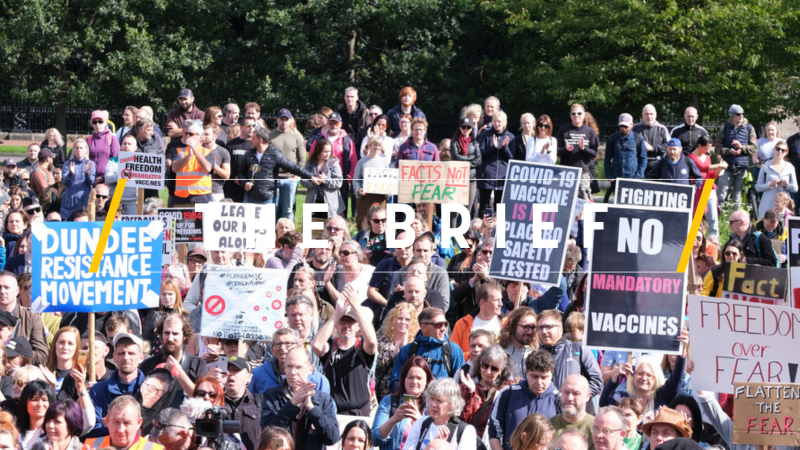 As news broke on Tuesday that trials on one of the leading contenders for a COVID-19 vaccine have been paused over a potential health risk, leaders around the world are still scrambling to offer false hope and promises.

Between US President Donald Trump conveniently signalling a roll-out of the vaccine just days before the presidential election, and Greece’s health minister promising the earth before Christmas, elected officials across the world are falling over themselves to assure the public that an end to this pandemic is in sight.

With restless populations rebelling against confinement while numbers continue to rise, the political pressure is piling on politicians to do something, anything – and who can blame them?

The desperation to offer the public a sliver of hope and buy themselves a little while longer at the top is, of course, understandable and unsurprising.

But the fact of the matter is that the vaccine’s due date is dictated by the scientific process, not the political agenda.

Vaccines have been one of the greatest medical achievements in human history, saving countless lives. Vaccines for measles, mumps, rubella, polio, smallpox and influenza have demonstrated a long history of safe use when developed in line with regulatory requirements.

But besides the obvious acute health fears associated with a new vaccine, this rush to push out a quick-fix solution runs a more insidious risk.

There is already a dangerous, and growing, distrust of vaccines. It took only one poorly executed study linking autism to the MMR vaccine to spark a generation of anti-vaxxers, ultimately culminating in the comeback of what should have been a long dead and buried disease.

The World Health Organisation consequently declared vaccine hesitancy as one of the top ten threats to global health in 2019.

In the wake of the COVID-19 pandemic, anti-vax sentiment is again on the rise, and this rush to promise vaccines and push the process through does nothing to allay fears that are already alive and well.

We should be wary of adding any fuel to the fire. As we’ve already seen, it takes only one tiny slip for the ramifications to be felt for years to come.

Figures of authority have a responsibility to handle the development and rollout of the vaccine with care, or else risk a rise in mistrust which could spell disaster not only for COVID-19 but other diseases we’ve previously put behind us, and also any future crises.

We’re all in agreement – the only way out of this pandemic is a vaccine. But rushing a vaccine at the convenience of either a demanding authority or the public risks more harm than good.

A message by amfori: Join the amfori Unleash Opportunity Digital Conference – 24  September. At amfori, we believe that Trade with Purpose brings economic, social and environmental benefits for all. Join us on September 24th  for our Unleash Opportunity Digital Conference. We have two engaging sessions, with speakers from the world of government, business and civil society, do not miss it!

And while you’re at it, have a look at the latest edition of our Global Europe Brief, your weekly update on the EU in the global perspective.

Meanwhile, French President Emmanuel Macron is hosting leaders from Mediterranean states for a summit set to be dominated by growing tensions between Turkey and EU states in the east of the sea.

The issue of how to transport billions of doses of vaccines from factories to hospitals and clinics once the jab is ready has been billed as the ‘mission of the century’.

German Agriculture Minister Julia Klöckner has confirmed a case of African Swine Fever in a wild boar in Germany, but the EU farmers association has been quick to stress the country is well prepared to respond to the issue.

Fifteen EU member states have breached bloc-wide rules in agreeing bilateral commercial deals with China as part of Beijing’s ambitious belt and road initiative (BRI), according to a damning report published by the European Court of Auditors.

The way humanity produces food, energy and goods is destroying the habitats of thousands of wildlife species, causing plunging population sizes and contributing to the emergence of diseases such as COVID-19, according to a new report from the WWF.