The Brief, powered by ELF — Nobody is safe until EU stops being hypocritical on vaccines 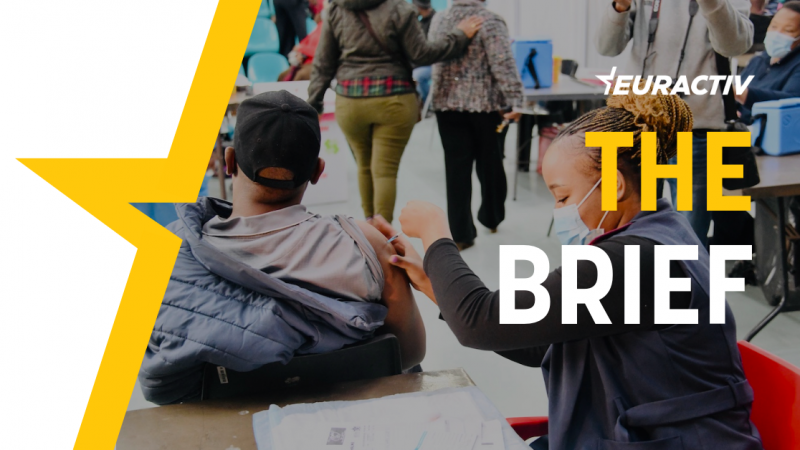 The mantra of EU officials that “nobody is safe until everybody is safe” is meaningless as long as the EU does not do enough to get vaccines to everybody. South Africa is the most recent victim of this hypocrisy.

Last year, when it became clear that a vaccine was going to be available in record time, India and South Africa pushed for a “TRIPS Waiver”, which would waive patents and other intellectual property on COVID vaccines, tests and treatments for the duration of the pandemic.

This would allow developing countries to produce the life-saving products on their own much faster and thus make the whole world safer, they argued.

After some initial reluctance, the US under the new Biden administration also threw its weight behind a vaccine waiver earlier this year.

The only major holdouts are the EU, UK, Norway, and Switzerland. The rich old world is busily vaccinating itself while guarding the profits of its pharmaceutical companies.

The arguments put forward by the EU were the ones of the pharmaceutical companies: First, an intellectual property waiver would stifle innovation, and second, even if other companies had the right to produce COVID vaccines, they would not be able to do so because production is difficult and resources are scarce.

The innovation argument is dubious, given the fact that a lot of medical research is publicly funded, and that the vaccine producers have made a hefty profit on their COVID vaccines already.

Also, think about all the innovations that do not happen because the economy has to repeatedly go into hibernation with every new COVID wave.

The claim that vaccine production was too difficult for other companies to emulate is both arrogantly self-serving and betrays a lack of confidence in truly free enterprise uninhibited by artificially imposed patent monopolies and technology hoarding.

The EU’s resistance to a TRIPS waiver could be forgiven if it offered an equivalent alternative. The EU relies on Covax to distribute vaccines to low-income countries, having pledged a grand total of 450 million vaccine doses. For itself, the EU has secured 4.6 billion doses.

The entire Covax scheme wanted to deliver 1.8 billion doses to countries all over the world this year. By 29 November, it had delivered 563 million doses. This is nowhere close to making sure “everybody is safe”.

According to the International Monetary Fund, the World Bank, the World Trade Organisation and the World Health Organisation, the world could be vaccinated at the cost of $50 billion.

From an economic point of view, the EU could finance this unilaterally and still make a hefty profit from the ensuing worldwide recovery that is estimated to amount to $9 trillion by 2025. Politically, however, it seems unachievable.

Of course, European Commission President Ursula von der Leyen is right when she says that “nobody is safe until everybody is safe”.

EU countries have just started a new round of travel restrictions and markets have been sent into renewed turmoil after the new ‘omicron’ variant has shown up in South Africa, where only 24% are fully vaccinated.

The country that long asked for the right to produce the vaccine on its own underlines its point rather forcefully.

Ironically, the reaction by Europe and other regions – to ban flights from South Africa and other African countries – hits poor nations most. Again.

And irony has another ace up its sleeve. The TRIPS waiver should have been discussed at the first WTO ministerial conference that should have started today. However, due to the new COVID variant, the conference has been postponed indefinitely.

South Africa and other low- and middle-income countries cannot wait for enough leftover vaccines to trickle down to them. Instead of buying and donating too few expensive vaccines, Europe should provide access to the technology, so that countries can help themselves.

A message from ELF: The European Liberal Forum develops comprehensive liberal solutions to real-life problems
The ELF is acting as an incubator for European policy debates. Together with our 47 member organizations, world-leading liberal foundations and think-tanks, we explore policy solutions for a freer and fairer Europe. Discover our publications >>

Russia will pay a high price for any new military aggression against Ukraine, NATO and the US warned on Tuesday as alliance foreign ministers meet for a two-day meeting in Latvia’s capital Riga to discuss Moscow’s intentions for assembled troops on the border. Belarus also announced joint military drills with Russia along its own border with Ukraine on Monday.

The UK’s competition watchdog has ordered that Facebook owner Meta sell Giphy, the popular animated images platform, in Britain’s first move to bolster regulation of the ‘big tech’ sector. “The tie-up between Facebook and Giphy has already removed a potential challenger in the display advertising market,” said Stuart McIntosh, chair of the independent investigation on Facebook-Giphy.

The European Commission is considering a new EU-wide requirement to measure the carbon emissions associated with construction materials throughout their whole lifecycle. Officials aim to introduce minimum energy performance standards for all buildings by 2035 as part of the upcoming revision of the EU’s Energy Performance of Buildings Directive (EPBD) on 14 December, but little progress has been made on reducing the environmental impact of construction materials in the building sector.

From matching farms with tech start-ups to pairing vegetable producers with school canteens and families, new EU research programmes are playing matchmaker to spur innovation and reinforce agriculture modernisation in Spain. The projects, funded by Horizon Europe, the EU’s €95.5 billion research and innovation programme, aim to highlight the value of these alliances in agriculture.

In Germany, the Greens’ pick for agriculture minister came as a surprise to many — Cem Özdemir has no previous experience in the field. But as long-term Green party chief, he says he has learned how to “build bridges,” and as a former MEP, he is no stranger to European politics.

Germany’s new three-party government will have to back key EU reforms even if they do not align with the coalition’s values. According to EPP chairman Manfred Weber, the issue of arms exports, “which today are decided in Berlin,” but where in future “Brussels could decide what arms we sell in the world,” will likely be controversial.

And France will be able to reach a compromise with the new German government to update the European Union’s fiscal rules and tackle economic challenges following the pandemic, according to French Finance Minister Bruno Le Maire. “I am convinced that we will be able to find an agreement on the necessary reform of the Stability and Growth Pact that guarantees eurozone stability and allows more and greener growth,” he said.

Preliminary bank data shows that German consumer price inflation rose further in November to hit another record high, increasing pressure on the European Central Bank to react. Consumer prices, harmonised to make them comparable with inflation data from other European Union countries, rose 6.0% year-on-year following an increase of 4.6% in October, the highest rate recorded since January 1997.