As Belgium ranked second in Europe in terms of COVID-19 infections from 10-11 October, health minister Frank Vandenbroucke said he cannot guarantee there will be no second lockdown.

“It’s not simple. I can’t anticipate the facts, but I can, reluctantly, announce a difficult autumn,” Vandenbroucke told VTM News on 11 October. Asked whether he would rule out a new lockdown, he said he “cannot guarantee anything”.

“The only thing I can guarantee is that if we work together and all do the same things, we have the best chance of achieving what we want to achieve: to keep the schools open, keep businesses working and allow the hospitals to cope,” he added.

His comments came after Belgium recorded the second-highest number of infections per 100,000 inhabitants in Europe over the weekend.

On 8 October, top virologist Marc Van Ranst warned that a new lockdown could be coming up if COVID-19 infection numbers don’t start to decrease within ten to twelve days. “If the figures for the number of infections and hospital admissions do not start to fall within ten to twelve days, there is only one option left: a lockdown,” Van Ranst told Het Laatste Nieuws, noting, however, that another lockdown would look different.

Newly-appointed Belgian Prime Minister Alexander De Croo (Open VLD) had already guaranteed that he won’t declare a full lockdown, but concerns are growing over the recent spike in cases.

Belgium’s capital, which has been recording the most new daily COVID-19 infections, is shutting down bars and cafes for a month but allowing restaurants to remain open, Brussels Minister-President Rudi Vervoort (PS) announced on 7 October.

Brussels hospitals have been pleading for the transfer of patients to less busy hospitals outside of Brussels in neighbouring provinces, Belgian media reports.

The practice could become widespread if the number of hospitalisations continues to increase. Brussels hospitals are far from saturation, but according to them, the measure is necessary if they want to continue to operate normally. If the pandemic worsens, Brussels plans to dedicate re-dedicate 50% of intensive care beds to COVID patients.

At national level, the Belgian government has tightened COVID-19 restrictions, taking effect at the end of the week, to counter a sharp rise in infections across the country. From 9 October, gatherings where social distancing rules do not apply will be reduced to a maximum of three as opposed to previous five. In homes, private gatherings will be reduced to a maximum of four in addition to one’s own family and bars and cafés will all have to close at 11 pm.

On 23 September, the European Centre for Disease Prevention and Control (ECDC) moved Belgium into the group of European countries with “worrying trends” as it faces a moderate risk of COVID-19 spread.

Even so Belgium is ending a requirement to wear masks outdoors and reducing the time people have to self-isolate, in a slight easing of coronavirus restrictions announced on 23 September despite sharply rising numbers of COVID-19 infections.

Masks will still have to worn in shops, cinemas, on public transport and in crowded streets.

To aggravate the situation, the Red Cross in Belgium has warned that the country’s hospitals will run out of blood in two weeks time, RTBF reported.

Fearing the pandemic, many donors stopped donating blood. The Red Cross made an appeal to blood donors saying that Belgian hospitals urgently need 2,000 bottles of blood.

A long-term colour code plan for the country?

In its 23 September meeting, Belgium’s National Security Council is likely to discuss a long-term colour code plan and the adjustment of the “social bubbles”.

Experts advising the National Security Council are said to have suggested a colour-coded system similar to that in place in Ireland, where it has the four coulors blue, yellow, orange and red, depending on the “threat level” of the coronavirus.

Also on the table, is a so-called “contact budget”, which would allow a colour code to determine the number of people with which one could have contact with, thus overhauling the current measure that bans of gatherings of more than five.

Meanwhile, travellers coming from Amsterdam, Vienna and Budapest as well as provinces in France and Croatia, will be coming from so-called “red zones” as of  18 September at 4 pm, according to the Belgian foreign ministry’s latest update.

The country therefore will no longer allow non-essential travel to these areas, and a test and quarantine upon return will be mandatory.

PM calls on Belgians to comply with COVID-19 measures

Prime Minister Sophie Wilmès (MR) called on Belgians in a video message on Tuesday to comply with the existing COVID-19 restrictions.

According to her, the latest figures are “alarming”, but stricter measures will not be taken for the time being. However, she urged everyone to take responsibility and respect the rules “before it is too late”.

Belgium is about to start the second “mini” coronavirus wave of the summer, which can still be contained if authorities take appropriate measures, Yves Van Laethem of public health institute Sciensano told RTBF.

“We are undoubtedly in a dynamic which shows that we are at the threshold of the second mini-wave of the summer,” he added.

An average of 680 people per day tested positive in Belgium in the week between 7 and 13 September, according to the latest figures by Sciensano presented on Monday.

According to the numbers, the trend of new infections per day increased by 42% between 4 and 10 September.

The differences in the colour-coded risk systems between Belgium and France are “extremely confusing”, governor of the West Flemish province, Carl Decaluwé, has warned and urged EU countries to coordinate.

Decaluwé’s comments come as cities and towns on the border of France are concerned about the rise of COVID-19 infections on both sides and the movement of people across their borders.

“There is not much we can do for the time being,” Decaluwé told VRT, adding that “as long as the region remains orange, we cannot take any extra measures.”

Earlier this month, the European Commission proposed a set of recommendations to prevent discriminatory measures applied by member states in a new attempt to harmonise fragmented COVID-19 travel restrictions across the bloc.

Since 1 July, the local Brussels police has issued a total of 1,537 court reports for not wearing a mouth mask in public, according to figures presented by Brussels mayor Philippe Close.

Due to the outbreak of a second wave, wearing a face mask was gradually made compulsory in more places and since 12 August in the entire Brussels region.

Meanwhile, Belgium’s crisis centre’s press conferences will be reduced from three to one a week, Yves Stevens of the National Crisis Centre told Belga news agency, as the coronavirus figures have become stable over the past few weeks.

The trend of new infections per day increased by 3% over the 7-day period from 27 August to 2 September reaching an average of 435.6 persons pre day being tested positive, compared to the preceding week, according to the latest figures from Sciensano.

“We continue to communicate the figures on a daily basis, but the interpretation that is currently given three times a week at a press conference will henceforth only take place once a week – on Wednesdays,” he said.

Open Vld leader Egbert Lachaert, who is currently tasked with exploring options for a potential governing coalitions for a new federal government, tested positive for COVID-19 on 8 September. This means that everyone who has been part in the negotiations – and their assistants – will have to test for COVID-19, including King Philippe.

However, the country will then face the difficult choice of choosing the first people to be vaccinated, De Cuyper added. “Based on all the information I have, I dare to say that in March 2021 we could have a vaccine against COVID-19 in Belgium. It’s a realistic deadline,” De Cuyper told Het Laatste Nieuws.

“A first European delivery will undoubtedly involve 50 million doses. Belgium will receive around 1.2 million”, he told the newspaper.

Each country will therefore have to make choices about the first people to be vaccinated. “It will be a difficult discussion. There will be a lot of pressure from all sectors,” De Cuyper said. 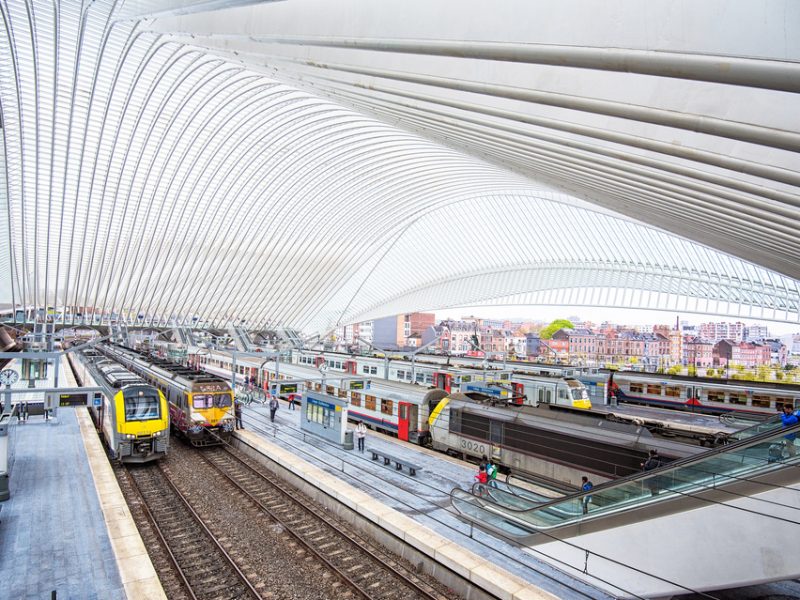 A Belgian government plan to boost domestic tourism got up and running on Monday (31 August), as applications for a free railway pass finally opened after a delay of a few months.

The launch of a nationwide COVID-19 tracing app has been postponed by a week as  developers are still waiting for an EU opinion, Karin Moykens of the Interfederal Committee Testing & Tracing confirmed on 10 September.

The final stage of development has been completed, Moykens emphasised. Following the feedback of 80 people from the testing phase, a final, official version is now being developed, which will be tested by some 10,000 people, the Belga press agency reported.

Previously, people landing at Brussels Airport returning from a “red zone” will be able to get tested on site “from the end of this week or the beginning of next,” Le Soir reports.

“The tests will be analysed in the mobile lab which makes the results available within a couple of hours,” Brussels Airport said on its website.

The communication added that the testing centre will also be available for passengers to countries that require a negative COVID-19 test upon entry. An analysis is underway to develop the same type of service (at least on return) at Charleroi airport, according to RTBF. 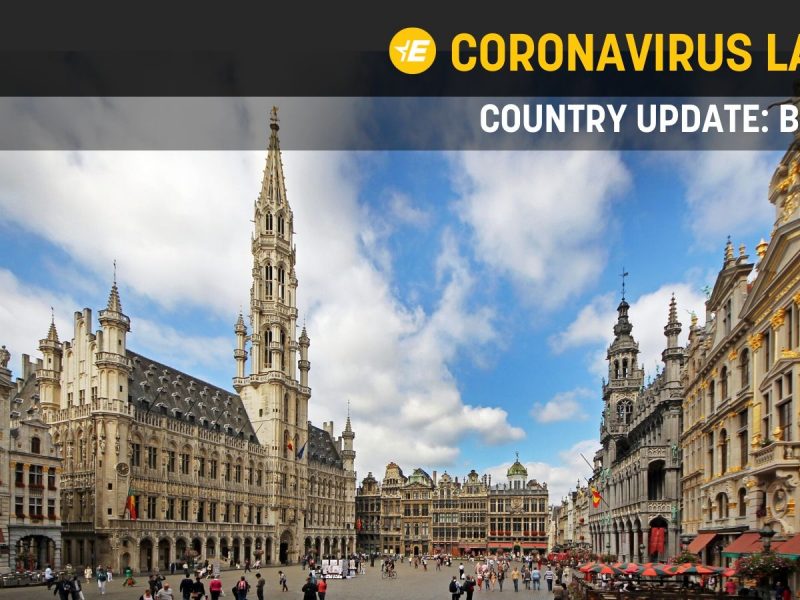