The Portuguese government said it expects Brussels’ budgetary rules to remain suspended until at least 2022 when EU member states are expected to recover last year’s GDP.

Portuguese Prime Minister António Costa told reporters on Thursday (1 October) he had spoke to Commissioner Margrethe Vestager “about the need to extend the flexibility on state aid rules, which expires at the end of this year”.

It is clear that by the end of 2021, we will have the economy still heavily constrained by this crisis, and that this deadline must therefore be extended,” Costa said.

Moreover, Portugal would “make full use” of the €15.3 billion in grants it could receive from the European Union Recovery Fund, Portuguese Prime Minister António Costa said on 29 September at a session titled ‘Portugal and the European Union, Recovery and Resilience Programme’ in Lisbon after a keynote speech by European Commission President Ursula von der Leyen.

However, Portugal would not use its share of loans from the programme, the prime minister added. The PM confirmed that Portugal is eager to be one of the first countries to agree on its Recovery and Resilience Plan with the European Commission as it “must be in the front line”, while the Commission chief said that “Portugal is well placed to make the most of” the EU recovery fund.

Portugal’s government decided on 24 September to extend the state of contingency in mainland Portugal until 14 October given the increase in COVID-19 cases in the last five weeks.

The government’s decision was announced by the minister of the presidency, Mariana Vieira da Silva, who said that the government would reassess the state of contingency in mainland Portugal within two weeks, along woith a more in-depth analysis of the impact of the first weeks of school.

The response to the current crisis requires unity, said Portuguese Prime Minister António Costa on 23 September, adding that the execution of European financial resources over the next few years requires minimal bureaucracy and maximum transparency.

Meanwhile, Portugal is expected to record a 0.7% deficit this year as its public debt may rise to 133.8% of its GDP, according to a report for Brussels released on 23 September.

The number of job seekers with unemployment benefits rose by 39% in August to 224,568, according to monthly Social Security statistics.

A COVID-19 plan for the fall/winter

Portuguese health authorities will present a coronavirus plan for the fall/winter period, Prime Minister António Costa told a press conference on 18 September after a two-hour meeting of the crisis office that monitors the evolution of the virus in Portugal.

The COVID-19 rules already in force should also be complied with, the prime minister added.

Meanwhile, the PM also announced the setting up of a ‘Task Force’ to respond to non-COVID-19 patients in public health services. The task force is meant to assist in the continued surveillance of chronic patients, cancer screenings or other essential responses.

From 15 September, Portugal will be in a contingency situation due to the COVID-19 pandemic, limiting gatherings to 10 people, according to the measures decided on 10 September in a cabinet meeting and announced by Prime Minister António Costa.

The prime minister also said that the country will significantly increase its testing capacity, and that it was vital to respond quickly to suspected COVID-19 cases.

On top of the measures, shops can only open after 10 am and will have to close between 8 pm and 11 pm, and the Metropolitan Areas of Lisbon and Porto will both have specific measures.

This comes after Portugal registered 646 new Covid-19 cases on 9 September, the biggest increase in the number of new daily coronavirus cases since 20 April. The Portuguese health authorities say the increase is due to the return of vacations and increased mobility.

Economy cannot grind to a halt

Portugal cannot grind to a halt a second time to stop the spread of COVID-19 as it did in March and April when the government imposed a nationwide lockdown, Prime Minister António Costa told journalists on his way into a briefing on the COVID-19 situation attended by experts, politicians, business and trade union officials on 7 September.

Costa argued that a second lockdown would not be sustainable from a social and economic point of view.

At the same meeting, experts also revealed that the country’s epidemiological situation had worsened since mid-August. 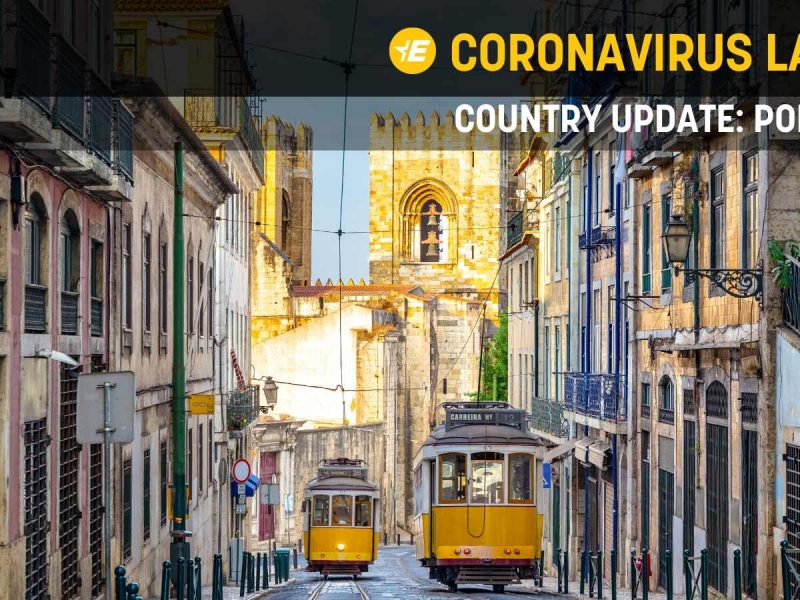 Portugual could 'face one of the worst crises in history'