All restaurants and cafes in Serbia, including those with outdoor seating facilities, have been forced to close at 11 pm as of 8 October, Serbia’s crisis headquarters decided on 7 October.

“The moment is crucial for abiding by the measures, to wear a mask indoors, to avoid gatherings of many people,” said member of the crisis headquarters, Darija Kisić Tepavčević, TV N1 reported.

Tepavčević also warned that both the control and sanctions in the event of non-compliance would become stricter due to the “visible” rising trend in the number of coronavirus infections, especially in the territory of Belgrade.

Since  the start of teh school year (1 September), Serbia recorded random cases of COVID-19 in 24 elemetary and nine high schools, of which transmission was only recorded in two.

According to chief epidemiologist Predrag Kon, these figures are “acceptable numers”, adding that schools are expected to operate as they have since September.

This was confirmed by the European Bank for Reconstruction and Development (EBRD) said in its latest forecast on the effects of the pandemic on the region, a statement published on Thursday (1 October) wrote.

The report said that the effect of the coronavirus on Serbia was less serious than in comparable states, partly due to the large contribution of the production of basic products in overall production.

The EBRD recalled that a five percent jump in Serbia’s GDP in the first quarter was strong. The bank also said that this was driven by consumption, state consumption and investments.

Meanwhile, rising exports compared with last year slowed to 3.1%, which is the slowest quarterly rate since 2014.

The condition of health of some 48,000 citizens who had returned from countries with a volatile epidemiological situation is currentlz being monitored, epidemiologist Predrag Kon told Pink TV on 30 September.

About the COVID-19 vaccine, the epidemiologist told Pink TV that Serbia will obtain those vaccines that have so far been “mentioned the most”, adding that this “won’t happen simultaneously: the first quantities will probably begin to arrive as of the start of next year.” He also said it was important that there be sufficient vaccines against the flu because both the flu and COVID-19 would have a detrimental combined effect on people’s immunity.

Serbia’s epidemiological situation is one of the best in Europe as it is “holding up well” after the “significant” deterioration in July and August, said the WHO’s representative in Serbia, Marijan Ivanuša, on 23 September.

When asked if he would recommend a state of emergency, Ivanuša said that the current situation in Serbia was good, and that he didn’t see why any additional measures should be introduced.

“The situation needs to be monitored on a daily basis, and if it worsens, additional measures should be considered,” he added.

A UN report unveiled on 28 September also confirms this.

According to the UN’s socio-economic report, the Serbian government provided a good and timely response to the first wave of the COVID-19 pandemic, reacting to the health crisis and the pandemic’s direct impact on the country’s economy.

As this unprecedented crisis continues, the state will have to further strengthen the health care system, speed up reforms in social protection and local self-government, as well as provide support to small and medium-sized enterprises that will enhance their flexibility and crisis resilience, the report continued.

The ‘one-stop-shop’ principle, though altered due to the coronavirus pandemic, was still in use and had made border crossing faster and more efficient, said Chief of the Niš Customs Office Sasa Milenković at the Tabanovce border between Serbia and North Macedonia.

“Due to the coronavirus pandemic there has been a temporary separation on the exit side. Border police and customs officials of the Republic of Serbia have gone back to their positions because social distancing could not be applied,” Milenkovic told BETA.

“We hope that this will be temporary, as soon as the pandemic normalises we will go back to a joint crossing point,” he added

Representatives of regional organisations and the customs authorities of Serbia and North Macedonia visited on 22 September the Presevo-Tabanovce border crossing where they concluded that a year after the one-stop-shop concept was introduced, crossing the border had become more efficient and faster.

A COVID-19 vaccine by the New Year?

A vaccine against COVID-19, which is expected to be available around New Year, will be given out for free and administered on a voluntary basis.

This was promised by Serbian Health Minister Zlatibor Loncar in an appearance on Prva TV on 13 September.

The minister also said that he and other experts said they were not happy as citizens continues to be far too relaxed.

For its part, the United Opposition of Serbia (UOS) demanded that the Serbian government get in touch as soon as possible with international organisations, primarily EU institutions, to ensure that the COVID-19 vaccine that will be used in EU member states be made available to the citizens of Serbia as well.

“The European Commission has responded to the UOS’ inquiry regarding the Serbian population’s access to a safe vaccine against COVID-19,” the opposition group has said.

“From [their] response it is obvious that Serbia is not part of the COVAX Facility Programme (ensuring global equitable access to COVID-19 vaccines), managed by the Global Alliance for Vaccines and Immunization (GAVI) in cooperation with the World Health Organisation, and financed also by the EU,” they added.

All set for the new school year

A new school year for elementary and high school students started on 1 September, under special circumstances due to the epidemiological situation, which include fewer students in classes and abiding by COVID-19 countermeasures.

Serbian Minister of Education Minister Sarcevic said on Monday (August 31) that 97% of parents supported their children going back to school.

However she stressed that measures would be put in place, such as splitting class sizes.

“27% of schools will employ a partial split, but some 300 large schools in urban areas will have to split classes and respect a 15-pupil limit,” Sarcevic said in an interview with Pink TV.

Students will also have to wear face coverings and keep physical distance, while classrooms will be disinfected frequently.

The minister added that the entire September curriculum had been recorded already, and would be aired by the Serbian Broadcasting Corporation (RTS).

On 1 September, Prime Minister Ana Brnabic said that the authorities would not tolerate any breach of the measures prescribed to combat the coronavirus spread, particularly over the next two weeks due to the beginning of the school year.

Brnabic said that considering that an emergency situation was not in force, no one could order anyone to implement anything, but stressed that the citizens should consider recommendations as mandatory to contain virus spread. She noted that the children who had returned from abroad only a few days before the start of school should stay at home for two weeks.

Sarcevic had said earlier that 3.7 percent of parents opted for on-line classes.

The education minister had said in an interview with the Blic newspaper that his ministry would communicate with schools on a daily basis, and if a coronavirus outbreak was reported in any, that “specific instance” would be addressed, without closing all the schools.

Sarcevic also said that disinfectants had been provided for, along with 10,000 face shields for asthma students or students diagnosed with another illness that made wearing a face mask difficult.

According to the latest official figures, Serbia has 3,317 elementary schools with more than half a million pupils, and 515 high schools attended by about 250,000 children. 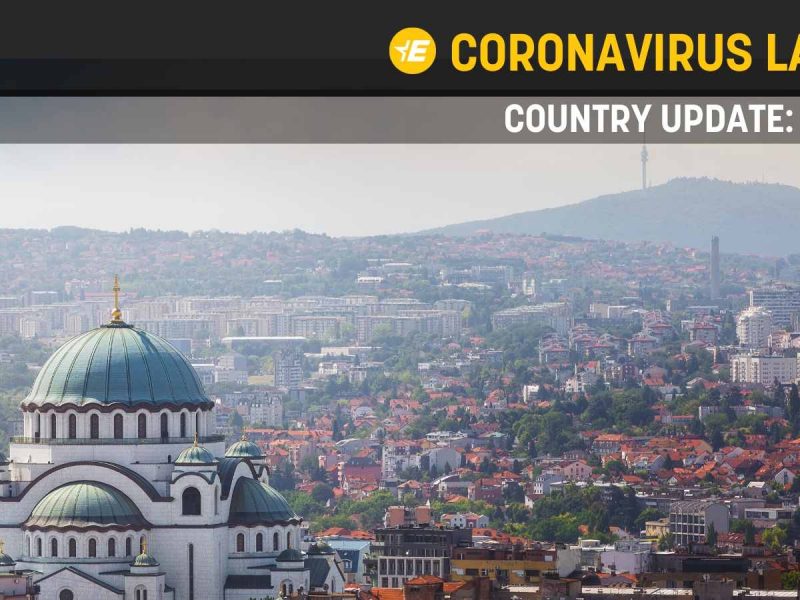