Jourova does not want to introduce legislation requiring online platforms to take down hate speech. But she said she still won’t exclude a new EU law if there is too much fragmentation as member states draft their own national rules.

[This interview has been shortened.]

You said today (19 January) that you’d prefer not to regulate online platforms by requiring them to remove hate speech. Some NGOs argue that a binding law could prevent overzealous removal, whereas the voluntary code of conduct you have now may encourage platforms to take down too many posts.

I take this into consideration. Some NGOs but also IT companies say they would like to have some binding rules. When I heard them, it was always related to fake news, not hate speech. And I heard a lot of it in Silicon Valley when I was there, when the crisis in Spain was culminating [in September, shortly before the vote on Catalan independence]. The American companies told me, ‘Who are we to judge which side law and justice is on?’ When I talked to IT companies, they always say, ‘We grabbed too much of this space and we need to give it back to people who should decide what’s lawful and what’s unlawful’.

We are now at a crossroads. I came with this code of conduct as maybe a provisional measure, but I needed to come with something at the end of 2015 that would bring an immediate effect. And this happened. We see that it works and I am quite a strong enemy of overregulation. That’s why I want to continue this, but I never excluded that if we see that there is a wrong fragmentation of rules in the EU, or that we have new owners of the giants who are not on the same page as us on values and the need to keep this space hate-free, then some other situation can happen. Negligence, for instance, from IT companies being simply more relaxed. So never say never.

Are you concerned about the new German hate speech law now after seeing it in effect the last three weeks? Some politicians’ tweets were already removed, including one from the justice minister [Heiko Maas, who introduced the law].

I have not heard yet any assessment from my counterparts, who are the minister of justice and his team. So I will have a lot of questions next week at the Justice Council. I heard the reflection from the IT companies and they say, ‘We are working under a sanction’. It’s a different way of working because they are overly careful about what to delete and what to keep on the networks. I think it is still too soon. Maybe after some more time, the situation will settle down. But now, and I expected this, there are some hysterical reactions. I think those are premature.

Do you feel pressure from some member states like Germany to consider proposing hard EU law?

Not yet, but I expect some saying, ‘Let’s seriously consider the German way’. I guess I will hear it from several of them next week.

What will your response be to them?

I will say I am following what we agreed last time. This third assessment shows the system is functioning and I will not hide that I am in favour of continuing this method. But of course I will also be open to understanding and listening to the dynamics in member states. There are three groups: those who would like to maybe join and follow Germany. The most vocal one last time was Austria, which is planning some own legislation. I don’t know how far they are. There were some strong voices who said, ‘Yes, let’s continue the code of conduct. But let’s be ready to act quickly when we see it doesn’t work’. And then there was the third group, which said, ‘Let’s not touch it, it’s the holy space where the freedom of expression must be kept as a sacred cow that requires 100% protection. My reply is yes, but there is some speech which must not be protected by freedom of speech because at the end that will turn against good things.

If you’re leaning now towards issuing some kind of non-binding guidance instead of legislation, what issues do you still want to clarify?

I think that over time of working on the code of conduct, there will be some case law created within this system. It will show up because there are repeated messages. The creativity of the authors [of hate speech] is surprisingly big. Probably they [the online platforms] will also develop some technology to get rid of these messages that repeat themselves. 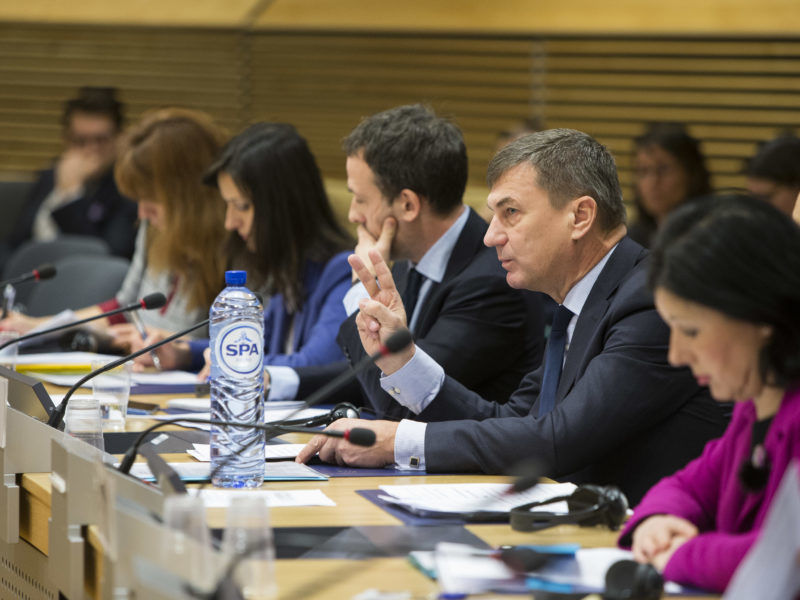 You mentioned today that Facebook has hired 3,000 new employees to monitor and remove posts with hate speech. Obviously Facebook can afford that more than some smaller online platforms. How do you get smaller companies to remove hate speech as fast as the big platforms?

I asked the giants if, once they develop some technological tool, they’d be willing to share it with others. And they said they are open for cooperation. It’s not a charity. Because the big ones know that if the small ones will spoil this, the legislation will fall on all of them. So we understand this dynamic.

The US Senate reauthorised yesterday the FISA 702 legislation that allows intelligence agencies to collect foreign citizens’ data. Are you concerned about how that could affect Privacy Shield [the US-EU data sharing agreement that Jourova oversees]?

It’s our long-term effort to have in the US friendlier and stronger legislation that will protect the data of Europeans, which is still not fully the case for FISA. It was not the case before and now the amended version also is not fully what we’d like to see. But on the other hand, looking at the glass half-full, we said that if FISA 702 does not get worse, it will be sufficient for keeping Privacy Shield running. So this is where we are now. I will go to America some time in March because I have other things to do there,  and I really want the Ombudsperson, fully-fledged, to be appointed and in place working for us. [The US government agreed in mid-2016 to appoint an ‘Ombudsperson’ to oversee complaints about Privacy Shield, but the position is still held by a temporary official.]

Yes, if it’s not by March I will have to go and be very clear that our patience is at its end. We need to have a fully-fledged representative in place. It’s their commitment. Of course I understood last year in March when the newly appointed people in the administration told me, ‘You have to wait because we still have to appoint 5,000 people who need approval by the Senate’. I fully understood. But we are in March 2018, so in one year I would expect this nomination and appointment to have gone quicker. We will express our wish that American legislation in the future will better cover the protection of European data. Understanding the big volume of data which is being transferred every year to the United States, it is worth some effort on the Americans’ side.

You’re meeting on Monday with the new US Secretary for Homeland Security Kirstjen Nielsen in Brussels. What are you going to say to her?

We will discuss security issues and I want to discuss with her our upcoming proposal on e-evidence and better gathering of evidence about a crime in the digital sphere. We inevitably need very strong cooperation with the United States there and we need to come to a reciprocally advantageous solution.

Has the US responded to your request from last year to cooperate on e-evidence?

Yes, I already had two debates with Mr Sessions [US Attorney General Jeff Sessions] about this, about our effort to enable the prosecutors to get e-evidence when it’s abroad somewhere. Because in Europe, you can see that the digital space has no borders above this space with 28 jurisdictions. So we need to solve the problem primarily on the European continent. But if the Czech prosecutor will ask IT companies with the suspicion that data is somewhere in the German space and from Germany the prosecutor receives an answer that then data has been transferred to the United States, you need to have the guarantee that you will get it from there. That’s why it’s a topic that will be somewhere between the main course and dessert with the secretary of homeland security.

Did Attorney General Sessions tell you he’s open to that cooperation?

Yes, we were not very concrete in our last debates. I also mentioned twice the US-UK ongoing debate about the regime of mutual access, which is not finished yet. So it will take some time to come to a conclusion, but I can’t wait too long because I have to have the e-evidence directive adopted in February.

This could have a direct effect on the Microsoft case that’s going to be heard at the US Supreme Court next month.. [US prosecutors have demanded data for an investigation from a Microsoft server in Ireland. The company refused. The European Commission filed an amicus brief to the US Supreme Court last month.]

Yes. But we have to equip law enforcement authorities with a quicker possibility than the heavy duty vehicle method, where a court in one state decides this evidence has to be collected and it goes to the court in another state, which will order the IT companies to deliver the evidence. It takes too long and we have urgent cases where it must be delivered immediately.