A group of lawyers are pushing for new EU legislation to clarify when internet companies must share data with a person's caretaker, or their family after death.

Lawyers pushing for new legislation argue that there is a need to create rules that apply across the bloc because internet companies, banks and social media firms might be headquartered in a different member state from where a person’s guardian or heir lives.

“We definitely need uniformity of law in this digital area,” said Sjef van Erp, a professor who is directing research on digital inheritance through the European Law Institute.

Van Erp said that American companies already comply with a similar law in the United States. A 2015 model law is in effect in most US states, other states are not required to implement it.

But Van Erp said the US version could be a cautionary tale: the EU should avoid a patchwork system so that lawyers can easily find out whether people have bank accounts or profiles on social media and other online services regardless of where they’re based.

“We’re afraid in Europe that some member states will follow the law and some won’t at all,” he said.

Van Erp said he plans to draft his own proposal for new legislation early next year and share it with the European Commission.

The Commission is planning to propose separate legislation in early 2018 to help police collect so-called e-evidence, or data needed in investigations across EU borders. But van Erp said there needs to be another law addressing when family, guardians and even debt collecting bailiffs can access data.

Often, family members or debt collectors do not know if a person has digital accounts at all, and they can only find out with proof that they have the right to access it.

Notaries, for their part, say digital assets like photographs, music or videos should be treated like physical assets, with personal rights and intellectual property rights applying normally.

“The phenomenon of digital succession should not be handled separately, but instead the traditional structure of succession must be adapted to the digital reality,” according to a briefing paper prepared ahead of the 4th Notaries of Europe Congress taking place in Spain this week.

However, notaries also recognise that “new solutions” sometimes have to be found to adapt traditional successions to the digital reality.

“The boundaries between personal and social relationships are blurred, when speaking of social media, blogs, and digital assets, making it hard to know where one begins and the other ends,” the paper says.

When it comes to social media accounts, provisions are already in place in the event of death. Facebook for instance specifically offers the option of completely closing the account and eliminating the profile, or keeping the account to allow friends and relatives to leave messages after the person’s death.

Notaries insist however that terms and conditions of social media platform should respect the domestic succession regulations of each country. “Of course, the document of legitimation should be a notarial instrument, as in the case of an ordinary will,” the paper says.

But notaries are also open to the idea of introducing online testaments, in order to deal with changes in things like electronic contact details, passwords, or account numbers.

“Perhaps, there could be mixed documents, or two complementary documents,” the notaries suggest.

Other legal experts argue that binding legislation on digital accounts won’t be as effective as a softer approach. Companies could agree voluntarily to include terms of service that address how other people can access users’ data. Many firms already do that.

An association of Italian lawyers set up a working group with Microsoft and Google to try to hammer out a voluntary agreement on when the firms will give people access to someone else’s account data. But their meetings stopped months ago, one source with knowledge of the meetings said.

Some lawyers think it isn’t worth the effort to draft a new EU law that would touch on inheritance issues – a broader area where legislation differs widely between member states.

“It could definitely be helpful in some cases, but nothing will happen for a long time. Every country has its own rules,” said Paul Grötsch, director of the German forum for inheritance law.

“We don’t have this kind of EU law for real estate inheritance. There’s no need to create one just for digital heritage if we don’t have it for property,” he added.

WhatsApp and Skype targeted in Commission's revamp of telecoms laws

Internet companies like WhatsApp and Skype are worried they’ll have to comply with new EU telecoms laws for the first time when the European Commission proposes a legislative overhaul this September.

Legal struggles over access to digital assets have recently grabbed headlines in Germany. In May, a Berlin appeals court ruled in favour of Facebook’s decision not to give parents of a deceased teenager access to her account after someone else had already asked the social media platform to shut it down. The court cited data protection reasons for its decision to side with Facebook.

In August, a Facebook executive summed up the firm’s policy in a blog post: “Where the law permits, we try to respect the wishes of those who have passed away. Sometimes, however, we simply don’t know what the person would have wanted.”

Van Erp said privacy has become one of the main concerns for lawyers trying to trace a person’s digital accounts and assets – and Facebook’s case in Germany is a glaring reminder of that.

France passed a new national law in October 2016 regulating the use of data, and it also included measures creating the right for people to give instructions for how their data is used after they die.

Olivier Proust, a partner at the law firm Fieldfisher in Brussels, said the French law is “one of the only data protection laws in the world that grants this right to individuals.”

Since the law went into effect one year ago, France’s data protection agency CNIL has received 10 complaints from people who wanted to access a deceased person’s data, a spokeswoman said.

The French law goes further than any EU rules so far: A broad data protection regulation that will go into effect across the bloc next year does not extend rights to the dead.

Privacy lawyers argue that with no laws outlining when companies must give access to someone’s data after they die, companies should follow the same rules that apply to living people – if the person did not have a will specifying what should happen to their online accounts.

“In many circumstances the deceased will not leave clear instructions as to what they wish to happen with their personal information/data and in this case data controllers should respect the data protection principles in GDPR [EU data protection regulation],” said Ailidh Callander, a legal officer at the NGO Privacy International.

Van Erp said his draft will differentiate between the different rights that should be given to guardians, heirs to digital assets or accounts and bailiffs seeking to collect debt.

“Normally you’d say email is personal, but after death, how on earth will you find out if it’s a correspondence with a bank?” he said. 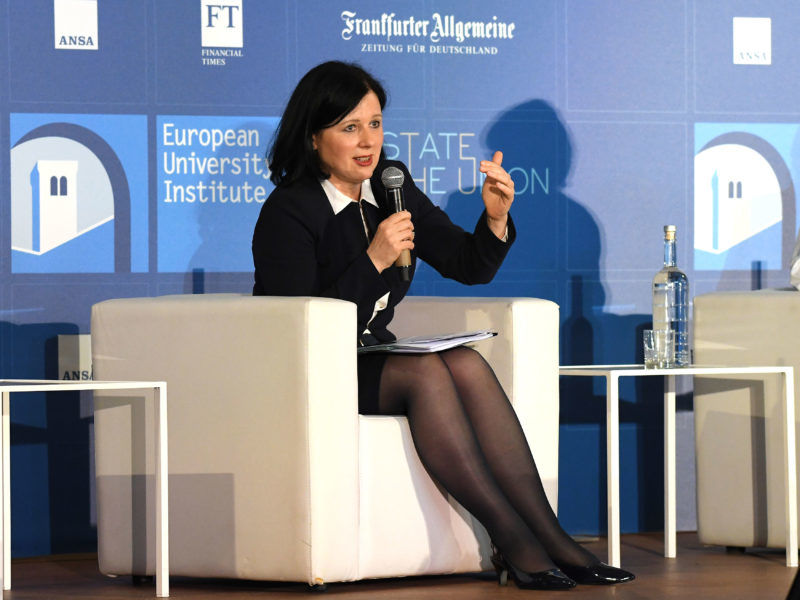 Data protection is only getting more important. Yet, most people simply do not care enough about protecting their personal data, Justice Commissioner Věra Jourová told EURACTIV Czech Republic.