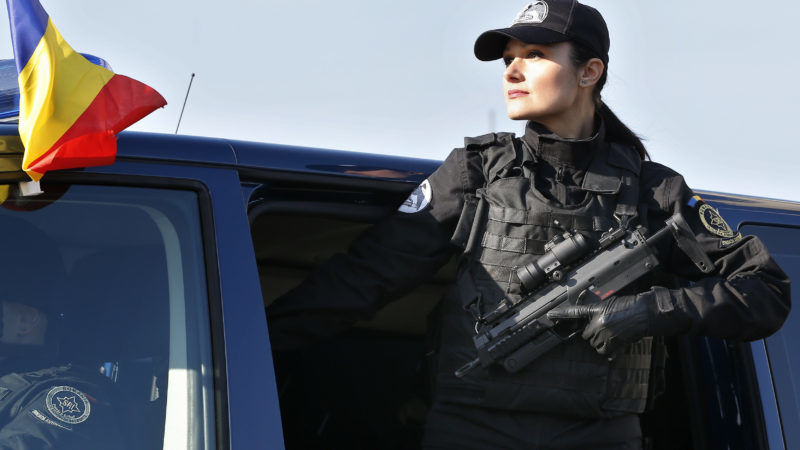 An officer of the Romanian Intelligence Service (SRI), an anti-terrorist squad drive in front of the Triumph Arch during a military parade marking Romania's Great Union Day, in Bucharest, Romania, 1 December 2016. [Robert Ghement/EPA]

A group of Romanian NGOs has submitted a claim to the European Anti-fraud Office (OLAF) alleging that over €26 million in EU funding has been misappropriated by the Romanian Intelligence Services (SRI) and that the process launched to award the money was unfair.

In June of last year, the Ministry of Information and the Ministry of European Funds opened a call for e-Government projects, with funding on offer from the European Regional Development Fund’s (ERDF) Competitiveness Operational Program for 2014-2020.

SRI submitted a project under the name of “SII ANALYTICS – Computer system for operational and analytical use and integration of high volumes of data”. It was the only project that was actually filed.

The European Parliament wants the European Commission to ‘Trump-proof’ the Privacy Shield data sharing agreement between the EU and the United States after the new US administration threatened to roll back some privacy safeguards.

The complaint presented to OLAF points out that the fact it was the only project submitted is already cause for concern and that it was lodged just seven hours after the official call was made.

The NGOs allege that the sheer scale of the project, which would require complex budget calculations and feasibility studies, means that SRI would have known about the content of the call before it was made and that national laws were violated.

When in January 2017 the NGOs asked the Ministry of European Funds to look into the matter, the authority replied in February that the case would require more time to investigate. A full response is still pending.

More serious still, the intelligence services’ venture has been accused of violating the fundamental rights of Romanian citizens and the EU’s 1995 directive on personal data, according to which the unambiguous consent of a person must be obtained before data is used.

Exceptions are granted when the information is for statistical use and for matters relating to national security. Given that the project is meant to focus on improving e-Governance, it does not apply.

When asked in September by the Technology and Internet Association (ApTI) to elaborate on the content of the SRI project, the Ministry of Information said that most of the data relating to the project’s content was confidential.

The scheme is meant to bring together various data sources from the country’s tax, health and internal affairs authorities. The number of entries is estimated to be at least 35 billion and the call for tender claims that the data “will be indefinitely stored”. Again, the NGOs claim this violates data law.

When contacted by euractiv.com, OLAF confirmed that it had received the allegations brought by the group of NGOs. The anti-fraud office highlighted that its experts will carry out a preliminary assessment to establish if the case falls within its competences and if action is necessary.

The EU agency stressed that it respects the presumption of innocence and that an investigation will only be opened if its initial evaluation warrants one.

The NGOs already asked Romania’s parliamentary committee on control of the intelligence services in January to investigate the case. In a reply made public at the beginning of this month, the committee ruled that the funding had been awarded legally.

These allegations come shortly after the Romanian government attempted to relax anti-corruption laws, which saw thousands of protestors descend on the streets of the nation’s cities. Bucharest eventually withdrew its proposal and the justice minister lost his job.

Romania is also still subject to the European Commission’s Cooperation and Verification Mechanism (CVM), a decade after joining the EU.