Europe has to become a security provider, says EU’s Borrell 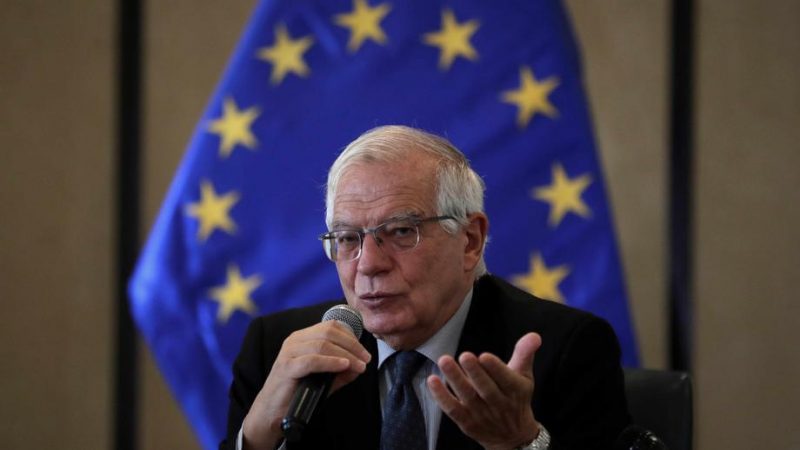 The document, slated as an attempt to 'fix the EU's doctrine', is set to be presented to EU foreign ministers next week. [EPA-EFE/Paolo Aguilar]

European citizens want to be protected by the European Union, which is why it must become a security provider, EU chief diplomat Josep Borrell told several European media outlets, including EURACTIV, in an interview.

“Europe has to be a security provider because that’s what European citizens want – to be protected by the Union,” Borrell said in Brussels, commenting on the first draft of the EU’s Strategic Compass, a tool meant to guide the implementation of the security and defence dimension of the EU’s Global Strategy.

“They want member states to improve their capacities in order to be more effective, and they want to project Europe in the world because they know that our security starts far away from our borders and depends on the security of our partners,” he added.

The document, slated as an attempt to ‘fix the EU’s doctrine’, is set to be presented to EU foreign ministers next week for a first assessment. Its final version is expected to be approved by EU leaders next March, under the French EU presidency.

Drawn up by the EU’s diplomatic service EEAS and national security agencies, the threat analysis, the first part of the bloc’s new military strategy document, is meant to cover security risks and trends across the bloc and worldwide.

“This is not another EU paper, this is a guide to action,” Borrell stressed.

“It would be stupid on my part to present a plane that wouldn’t fly,” the veteran Spanish diplomat said when asked whether the blueprint is the lowest common denominator between member states.

“Nobody can say this hasn’t been a collective effort, but now it is up to the member states to decide what our level of ambition is,” he added.

Speaking about EU strategic autonomy, Borrell said “it’s about being able to act together with others if possible, but also to act alone if necessary”, adding that the concept should instead be viewed as “strategic responsibility”.

“Our threat analysis shows we’re living in a much more hostile world, that our economic space is more and more disputed, our strategic space more and more contested and our political space and more and more degraded,” Borrell said in reference to the ongoing crises at the Polish-Belarusian border, in the Eastern Mediterranean and in the Sahel region.

“Everything is being weaponised – threats are coming from everywhere in very different ways – by land, by sea, they are hybrid, cyber, classical – the world is no longer the same as it was,” he said.

The draft seen by EURACTIV includes a range of new ways and means to enhance resilience to tackle hybrid threats, including the pledge to create EU Rapid Hybrid Response Teams, ensure cyber deterrence and address risks and incidents in space.

“To pretend to be just soft power, when everything is being weaponised, is certainly not enough – the EU cannot only speak about human rights and trade when we are facing a very conflictful and dangerous strategic environment,” Borrell said.

Asked how the new strategy will be an advantage to member states that face an external threat, such as Greece and Cyprus from Turkey, Borrell called for the EU to “build a common strategic culture because the threats are not divisible”.

“Europeans have to be ready to react, but for any problem, they have to share a common understanding of those rights and understanding that all of them are being affected,” Borrell said.

One of the more controversial proposals in the blueprint is the creation of a joint military intervention force, dubbed the EU Rapid Deployment Capacity, by 2025 with a force of 5,000 troops, including land, air and maritime components.

In the wake of the Afghanistan crisis, EU ministers over the summer discussed ideas for an initial entry force and the possibility of moving towards ad-hoc military cooperation between interested member states, which have found their way into the proposal.

“It is not the force that determines the mission, it is the mission that should determine the force,” Borrell said, adding that the new force should allow for deployments “to implement all the missions that are in the treaties”.

“The important thing is to have the capabilities to deploy, not on the basis of a pre-established force that is maybe not well-fitted to its mission, but to have different modules that can be combined in order to face each one a specific challenge,” Borrell said, adding this would include regular joint training and live exercises.

One example could be enforcing a UN ceasefire in Libya, the EU’s chief diplomat said.

“We know that the use of force won’t solve a problem, but we also know that the lack of military might is regarded by the rest of the world as a source of weakness,” Borrell said.

Speaking about the EU’s decision-making processes, however, Borrell admitted that the EU’s institutional setting “is certainly too rigid” and that the EU “has to inject flexibility if it wants it to be ready to face a problem rapidly”.

“Once the European Union decided to do something, not everybody has to be mobilised to participate. A group of member states can participate. But we have to allow them to do that with a certain degree of flexibility. We cannot decide by unanimity every step of the process.”

“I am not asking for changing the rules and going to abolish the unanimity because I know that is not the best way of acting. Because to abandon your unanimity, it requires unanimity – and this is not going to happen. What I believe that this institutional setting can be ‘flexibilised’ in order to act quicker and better,” said Borrell.