There are reasons to be concerned about Russia’s amassing of troops near Ukraine, but there should be no doubt about NATO’s resolve to “defend all allies in the region”, the alliance’s Secretary-General Jens Stoltenberg told EURACTIV in an exclusive interview.

“We are sending a clear message to Russia that there will be consequences if they use military force against Ukraine again,” Stoltenberg said in the interview, conducted ahead of his visit to Latvia and Lithuania on 27-28 November and before a NATO foreign ministers in Riga, likely to focus prominently on Russia.

However, asked what NATO would do if Russia invades Ukraine, Stoltenberg, who travelled to the Baltics together with European Commission President Ursula von der Leyen, said “the first task is to prevent that from happening”.

Asked what consequences Russia could face if it launched an assault on Ukraine, the NATO chief pointed towards economic, financial and diplomatic means, without elaborating. 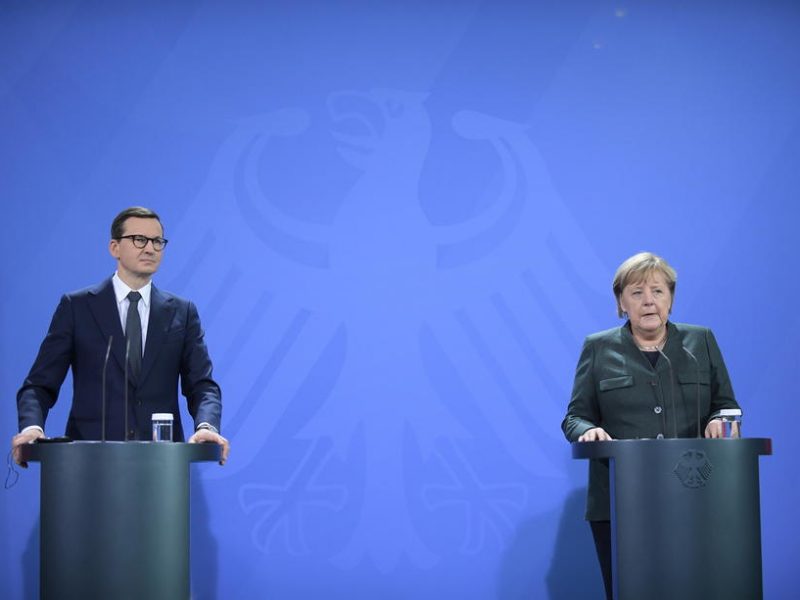 Merkel on Poland: Russian aggression against Ukraine should lead to EU sanctions

The European Union must be prepared to enact more sanctions against Russia if the situation in and around eastern Ukraine or on the Belarus-Poland border escalates, German Chancellor Angela Merkel said on Thursday (25 November).

Likewise, there is little doubt among EU and NATO diplomats in Brussels that Belarusian strongman Alexander Lukashenko had deliberately stoked the migrant crisis at the EU’s borders, with the Kremlin’s backing.

“There’s no certainty about the intentions of Russia, but what we do know is that they have used military force against Ukraine before,” Stoltenberg said when asked about concerns that the Kremlin could be using the Belarus border crisis as a smokescreen to prepare military action against the country.

“They did so in 2014, they still occupy Crimea, they continue to destabilise eastern Ukraine and the Donbas, they have launched several cyberattacks against Ukraine, and they have been responsible for hybrid activities against Ukraine – and now we see a very aggressive rhetoric,” he said.

“If you put all this together, of course, there are reasons to be concerned,” Stoltenberg said, adding that “there should be no misunderstanding about NATO’s resolve and commitment to defend all allies in the region”.

“The increased NATO military presence in the eastern part of the Alliance is a direct consequence of Russia’s use of force against Ukraine,” Stoltenberg said, pointing towards NATO’s combat-ready battlegroups in Poland and the Baltic states and increased defence spending.

Asked whether NATO plans to enhance military capabilities on the Eastern flank, Stoltenberg said the alliance would be “constantly assessing the need to further adjust its posture”.

“But I think what we are demonstrating is actually a strong will to adjust NATO in response to a more demanding security environment,” he added.

Meanwhile, in the High North, Finland – a close partner, but not a NATO member – has a 1,300-kilometre-long external EU land border with Russia and there have been worries that a similar situation with migrants could occur there in the future.

Asked how NATO would react in case Moscow commenced a similar large-scale ‘hybrid operation’ of sending refugees across the Russian-Finnish border, Stoltenberg said NATO would be “sharing information and best practices to be able to deal with hybrid and cyberattacks”.

In 2019, NATO leaders had first agreed to focus more on the challenge of China’s “growing international influence” and military might, which has since turned into a delicate balancing act.

The US’ perspective on China, a country with a strong military presence in the Indo-Pacific, has only slowly found its way into the perception of European allies, with many of them more comfortable with labelling Russia as a ‘threat’ and China as ‘challenge’, thus avoiding putting Moscow and Beijing in the same basket.

Asked whether the current security situation could also be a result of NATO having lost its primary focus on Russia, Stoltenberg said “we don’t have the luxury of choosing either terrorism or Russia or China”.

“In the past years, we have seen a huge transformation of NATO, where we put much less resources into out-of-area missions and operations like Afghanistan, and much more resources into collective defence in Europe,” Stoltenberg said.

“It’s not about moving NATO into Asia, but it’s about taking into account that what happens out there matters for our security here,” Stoltenberg said.

“We need to realise that we all face global challenges, so the idea that we can distinguish or try to confine the threats to specific geographic areas doesn’t work anymore – it is intertwined,” he added.

Asked whether in that case, he fears that Washington might aim to slowly pass Europe’s security responsibility to the Europeans and shift its focus increasingly towards the Indo-Pacific, the NATO chief stressed that “NATO will remain a regional alliance”.

“But this region faces global challenges, and they have brought NATO closer to China’s border,” Stoltenberg said, referencing Beijing’s assertiveness in cyber, space and ballistic missile weapons systems that could reach Europe.

He also welcomed the EU’s recently unveiled Indo-Pacific strategy, which also had acknowledged the need for “enhanced naval deployments” by EU member states in the region.

However, Stoltenberg did not want to speculate what NATO would do if one of those EU member states that is also a NATO member were to face a threat when deployed in the Indo-Pacific.

“That absolutely depends on what kind of situation we will be faced with, but NATO will not become a global alliance and NATO’s Article 5 applies to Europe or North America,” he stressed.

“But then as we have seen, sometimes we need to act beyond our borders – the first time was Bosnia and Herzegovina, NATO Allies went into Iraq and Syria and NATO is part of the global coalition to defeat ISIS, exactly the same reason why we went into Afghanistan,” he concluded.

No ‘going it alone’

In light of the EU’s strategic autonomy debate, Stoltenberg also stressed that NATO has been the main security provider in the crises of the past years.

“NATO is there – from Bosnia, Kosovo, Libya to Afghanistan – that’s strategic solidarity,” he added

Upon presentation of the Strategic Compass, a first blueprint of what the EU’s future military strategy could look like, the bloc’s chief diplomat Josep Borrell emphasised Europe should become a security provider.

However, Eastern Europeans, together with more transatlantic bound member states, stressed that any new EU military concept should not be at the expense of NATO, but rather in addition to it.

Stoltenberg declined to comment on the contents of the EU’s Strategic Compass, stressing NATO’s ongoing process of updating its own Strategic Concept.

“We welcome European efforts on defence, absolutely, yes. What we do not welcome is duplication, is new structures that compete for the same forces,” the NATO chief said when asked about the EU’s defence ambitions.

He said more European capabilities, including the military projects under the EU’s Structured Permanent Cooperation (PESCO) and the European Defence Fund (EDF), would be “strongly welcomed” as it would be seen as “a way to provide new capabilities we need.”

“But of course, these capabilities should also be available for NATO operations, and we have a very good example where EU and NATO have worked together to develop a new multirole air refuelling capability,” he said.

3 responses to “NATO chief: There will be consequences if Russia attacks Ukraine again”