Ukraine’s Ambassador to the EU, Mykola Tochytskyi, explains in an interview with EURACTIV why Kyiv is against the planned Nord Stream 2 pipeline. He also talks about Ukraine’s relations with Brussels and its complicated ties with Moscow.

Before taking his present post in Brussels in 2016, Mykola Tochytskyi, a career diplomat, was permanent representative of Ukraine to the Council of Europe (2010-2016), and head of the general service on international cooperation under the president of Ukraine.

We’re living through interesting times when Russia is in the centre of the attention, with the Salisbury case and the tensions over the chemical gas attack in Syria. If there’s someone who knows the Russians well, it’s certainly the Ukrainians. Is Russia becoming more radical and dangerous?

It’s already more radical and dangerous, especially since this last so-called election. For Ukraine, this is not elections. Not only us, but also the EU doesn’t recognise the election in occupied Crimea. If you follow the whole history of Russia, it’s always about the strong leader, the tsar, strong externally so that there is no need to explain why the country is so weak economically.

This will continue. The events in the UK and in Syria that you mentioned, and also what we’ve experienced in Donbas over the last four years, are a demonstration that nothing changes and that things are getting worse.

If Ukraine had a problem before, now the whole world has a problem, and especially Europe. Because the expression “нас там нет”, we are not here, is starting to apply also to European countries.

You mean the little green men in Crimea?

There may not yet be little green men in Europe, but it’s a hybrid trolling war from our neighbours.

But let me challenge you. Many say Putin has no interest in poisoning the double agent Sergei Skripal. And Syria doesn’t have an interest in gassing the population in an area it already controls. How about that?

And what was Russian interest to annex Crimea? I could argue that there was no Russian economic interest. But they annexed it. Did they have an interest in having a war in Eastern Ukraine? I don’t see the logic. Maybe this is the new style of hybrid war.

You mean, when you make sure your adversary doesn’t even know or understand what you are doing?

Exactly. But in the case of Skripal, you have to understand that if at some point he has been considered an enemy of the state, the decision to eliminate him will be implemented, sooner or later.

Isn’t there also a possibility that Putin has internal enemies, and that they stage events such as the one in Salisbury, with the objective of getting rid of him?

It’s difficult to say. What I wanted to stress is that the KGB mentality doesn’t change with time.

Is it now easier for you as Ukrainian ambassador to make your case before your Brussels counterparts? Maybe they show more understanding for Ukraine’s positions?

In any case, our cooperation with EU institutions continues and we are moving, maybe not as fast as we would like, but in the right direction.

What’s on your EU agenda now?

First, it’s the so-called roadmap for the implementation of our Association Agreement and our DCFTA (Deep and Comprehensive Free Trade Agreement). Economically we are also advancing. EU-Ukraine trade grew 30% in 2017 compared to 2016. It shows things are moving in the right direction. Of course, we would also like to move in the direction of a goal-oriented strategy.

That’s why at the last [EU-Ukraine] summit, our President proposed to look carefully, together with our EU partner countries, at the Union opening up on the Customs Union, the Digital Single Market, the Energy Union and Schengen. We expect to have a follow up at the next summit in July.

But according to my information, while there is an understanding on the EU side to do more in the first three areas, Schengen is more difficult, as the EU has to solve its internal problems first…

Of course, Schengen is not for tomorrow. But the issue that must be discussed within the society and the legislation which will need to be adopted is also about our internal security. It’s about border security, it’s about common data, exchange of information, not only inside Ukraine but with our international partners. Not only with the objective of becoming Schengen members, but for our internal security.

How in favour of joining the EU are Ukrainians?

That’s pretty high. On the other hand, the UK is leaving. Do you have a better argument now for the accession of Ukraine? The EU needs countries that feel strongly about the Union…

Let’s see first what will be the Brexit endgame. Our internal strategy already decided that EU membership is our strategic goal. And who knows? Maybe our country will develop successfully and we will be some kind of Switzerland, and it will be the EU asking us to join.

But we won’t tell our partners: “Look, the UK is going out, take us”. Although according to the alphabetic order, UK and Ukraine, we could replace them at the summit table without changing anything.

Tell us about Nord Stream 2. The last statement from Chancellor Merkel was that there could be a solution to build the pipeline with guarantees that the transit via Ukraine is preserved.

Our gas transport system is also a guarantee that tomorrow Russia will not send its army to invade Ukraine. It’s also some kind of soft power. If Nord Stream II would replace the Ukrainian transit, there will be a security risk. Last March we saw how Russia uses gas supply as a weapon. How could the EU guarantee such things won’t happen again?

[The latest gas dispute between Russia and Ukraine began after an arbitration court ordered Gazprom to pay Ukraine $2.56 billion as part of an earlier settlement. Gazprom vowed to challenge the decision in court and refused to resume supplies to Ukraine for the first time in more than two years on 1 March. The EU had to intervene.] 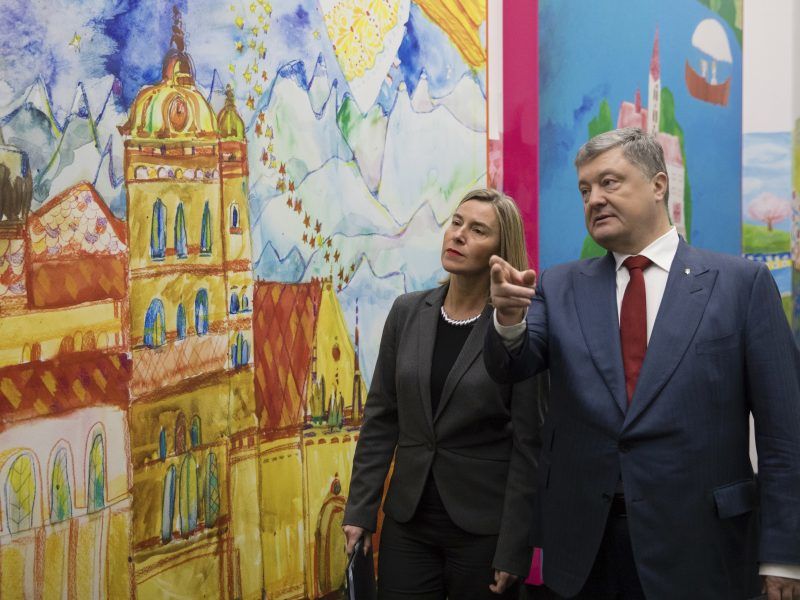 You mean – how can you trust the Russians?

In any case, this is about the security of Europe too. As a Ukrainian, I know from history we shouldn’t trust Russia, this dates from the time of Bohdan Khmelnytsky [seen as a national hero in Ukraine, under whom the Treaty of Pereyaslav was signed in 1654 with the Tsardom of Russia, after which Kyiv fell under Russian sovereignty].

No other agreement since has been respected by Russians. But the problem is not the Russians, it’s the state management. During their whole history, they didn’t have the chance to have a formula of management different than tsarist. For Ukraine, it’s very painful to have such a relation. I think it will take time [to improve relations], even if they return Crimea and withdraw their armed forces from Donbas.

You believe they will return Crimea one day?

In any case, we will fight, I mean politically. Not militarily, human life is something essential for the Ukrainian nation. After more than 10,000 died in this war in the East of Ukraine, in Donbas, this has become an even bigger issue for the people. In our history, the biggest battles of Russia, like against the Nazis, was on Ukrainian and Belorussian soil. And a majority of Ukrainians, not only the military but also civil population, were the victims.

Do you regret that Ukraine gave up the nuclear arsenal inherited by the Soviet Union? [Ukraine renounced its nuclear arsenal in 1994, when it signed the Treaty for the Nonproliferation of Nuclear Weapons (TNPNW) with Russia, the USA and the UK, relinquishing weapons inherited from the former USSR. Through the so-called Budapest Memorandum, these countries, which later included China and France, gave national security assurances to Ukraine, and also Belarus and Kazakhstan, where Soviet weapons were stationed. The Joint Declaration by the Russian Federation and the United States of America of 4 December 2009 confirmed their commitment. When Crimea was annexed, however, the treaty proved to be useless.]

It is not to regret or not. It’s another example of how worthy the Russian guarantees are.

But this also applies to the Western guarantees.

If you look at our history, it has always been like this. We are grateful to our European colleagues for adopting sanctions against Russia, we are thankful for the policy of non-recognition of Crimea, and the rest is for the Ukrainian nation to do.