With the continuous militarisation of space, EU policymakers have started dropping their opposition to plans linking Europe’s civilian space assets with defence elements. But as the political tide is slowly turning, cuts proposed in the EU’s draft budget threaten the new ambition.

“The rise in geopolitical tensions we see on Earth is being extended and projected into space,” EU’s chief diplomat Josep Borrell told the 12th European Space Conference, attended by policymakers, industry and researchers.

“Space is the new frontier of global politics,” he added.

#Space is the new frontier of global politics. Rise in geopolitical tensions on earth is being extended and projected into space. The EU has a solid track on acting together – @CopernicusEU, @GalileoGNSS & @eusatcen. And we will strengthen our capacity to act #BBESpaceConf pic.twitter.com/mBxYxqaR6z

The creation of a new branch in the European Commission – DG Defence Industry and Space (DEFIS) – long resisted by Britain, is an attempt by Commission President Ursula von der Leyen to stem a decline in EU influence.

“There has been a huge change of attitude for space being connected with defence in this way,” said Pierre Delsaux, DG DEFIS deputy director-general.

What the Commission is doing at the EU level is primarily civil programmes, such as Galileo or Copernicus, “but we need to take into account the defence dimension of everything we do,” Delsaux said.

“We are more and more depended on space assets, we need to defend them, we need to make sure we are protected in space, a lot of tech developed in space links with defence and cybersecurity,” he added.

EU officials also have repeatedly expressed concerns that the announced budget limitations come at a moment, in which European defence initiatives have started to show progress towards more European autonomy.

“We should make sure leaving a short-sighted definition of strategic autonomy – we always wanted to be a soft power, but while it should be rather smart power, we need to be a power in the first place,” said Nathalie Loiseau, chair of the European Parliament’s Subcommittee for Security and Defence (SEDE).

“It is indispensable to have a White Paper on European Defence, we did not make the time to agree on a strategy and objectives, this paper should include space dimension”, Loiseau urged.

“We should not be naïve and late,” the French MEP added.

The comments come at a time when space is becoming an area where the EU wants to develop technology jointly, particularly as China, Russia and the United States develop space weapons that can shut down enemy missiles and air defences or destroy satellites.

At present, there is only one weak barrier that forms the basis of international space law, the 1967 Outer Space Treaty, which prohibits the placing of nuclear weapons in space and limits the use of the Moon and all other celestial bodies to peaceful purposes only. It also establishes that space shall be free for exploration and use by all nations, but that no nation may claim sovereignty of outer space or any celestial body.

However, the treaty does not ban military activities within space, military space forces, or the weaponisation of space, and as such does not say anything about conventional weapons as it is mostly a non-armament treaty offering insufficient and ambiguous regulations to newer space activities.

While President Donald Trump has launched a US “Space Force”, Russia is increasingly using space assets for spying purposes and emerging powers like India and have developed missiles capable of hitting and destroying satellites, NATO only recently has started to brace for the new space age.

During the December London summit, NATO leaders have formally recognised outer space as the fifth military frontier alongside air, land, sea and cyber, in response to growing concerns over protecting satellite and navigation assets from enemy interference.

So far, the military alliance does not possess its own space technology and relies on the technical capabilities of its members.

Among European NATO members, only France has taken its own approach and presented a national space strategy.

Last year, French President Emmanuel Macron stressed that he wanted to equip France with “a space defence” and proposed a law for the French military program envisaging a budget of €3.6 billion for the country’s new space defence between 2019 to 2025.

French General Michel Friedling, head of France’s new Space Command, warned of “grey actions” in space that have so far stopped short of being hostile, but the liberal and non-binding environment could soon encourage such actions.

“But all space powers are developing capabilities and systems capable of spying, neutralising and even destroying,” he said.

According to him. France is ready to face threats in space and is “looking for capable European partners with vision and ambition in space”.

Europe’s own satellite systems, Galileo, EGNOS and Copernicus, are vulnerable and must be protected — all the more so because they are used by both civilians and the military, Friedling added.

Critics within the EU of the militarisation of space include notably Belgium, which “is opposed to it,” warned Foreign and Defence Minister Philippe Goffin.

The ongoing EU budget negotiations for 2021-27 have revealed the intention to enforce substantial cuts in Europe’s external action agenda. While the EU has big plans for its space and defence industries, cuts to the bloc’s proposed budget of some €200 billion have caused alarm.

According to this proposal, the EU’s new flagship framework, the European Defence Fund, is supposed to be cut in half from the €13 billion initially proposed to approximately €6 billion.

The fund was set up to strengthen Europe’s defence industry and reduce duplication in defence spending by co-funding defence research with member states.

Romanian MEP Christian-Silviu Busoi (EPP), chairman of the European Parliament’s Industry Committee (ITRE), warned that the cuts would jeopardise the Galileo programme — the European satellite navigation system — and Copernicus, the EU’s Earth observation programme, which are both increasingly under-protected against new threats.

According to SEDE chair Loiseau, Europe needs to work on the space dimension of the EU military space surveillance network, finalise the space programme, and needs “the budget to have the right means to do it,” Loiseau said.

This would also include support and protection of the European industry, she added.

Her words were previously echoed by Commission Vice-President Margrethe Vestager, who stressed that the second strategic part of a successful European industry is the defence industry.

“The is a whole lot where we can get the best value for our money by making links between defence and space industry – not, of course, by militarising space but maybe to recognise that the two industries share some of the same challenges and needs, which may be tackled in similar ways,” Vestager said.

“It is of enormous importance that the next EU budget makes money available for investments through Horizon Europe, Invest EU, the space programme and Digital Europe programme” to help SME’s across Europe to grow and compete, she added.

“We need to work together between EU institutions, national governments and civil and military operators to make the most of our capabilities,” Vestager concluded. 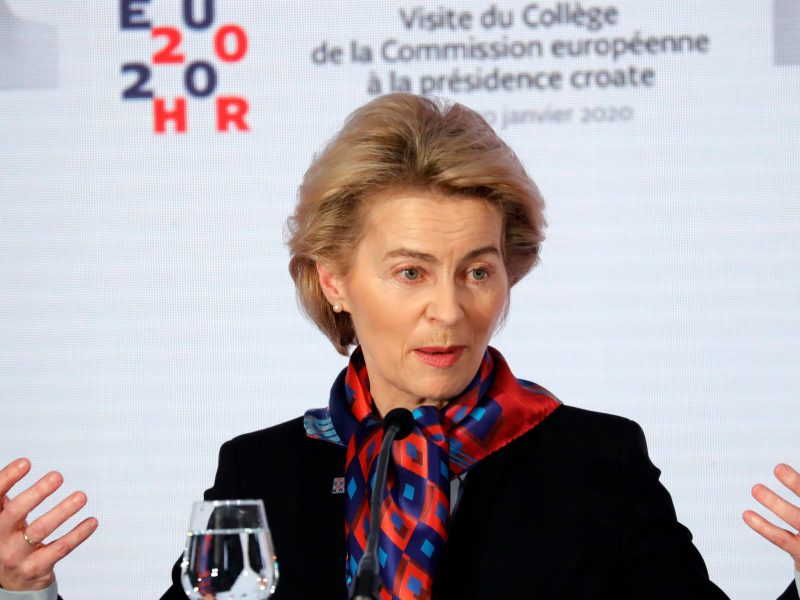 New European Commission President Ursula von der Leyen was put on the spot during her visit to Zagreb on Friday (10 January). Asked how she would prove that her Commission is ‘geopolitical’, given the EU’s weak response to growing challenges in the region, von der Leyen failed to provide convincing answers.