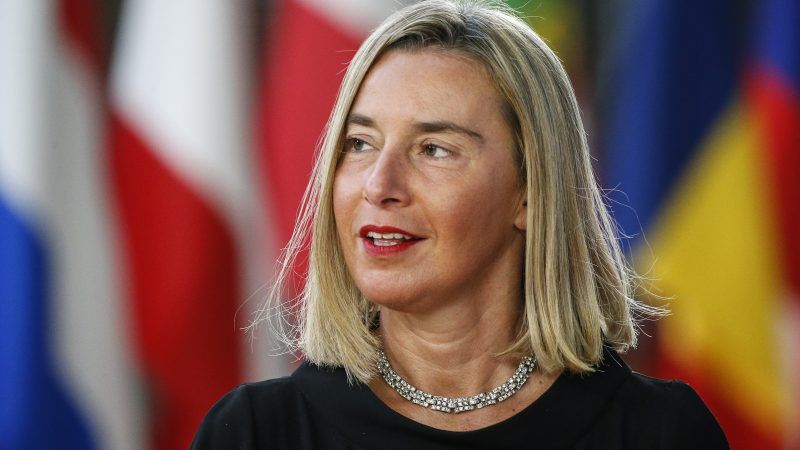 The EU’s top diplomat Federica Mogherini said Tuesday (20 November) she was “extremely worried” about the fate of a major US-Russia nuclear missile control treaty, warning that the security of Europe could be at risk.

Last month, Washington announced it was pulling out of the Intermediate-Range Nuclear Forces Treaty (INF) over Russia’s deployment of a missile system that Western powers say breaches the 1987 accord.

The Kremlin has fired off warnings of a new arms race, and as she convened a meeting of EU defence ministers Mogherini expressed concern, calling for talks to maintain the agreement.

“If we go towards the dismantling of this agreement, Europe’s security is to be put at risk and we do not want to see European territory go back to being a battlefield for other powers as it has been for so long in the past,” she told reporters.

“We don’t want to go back to those kind of tensions, to that kind of situation and we still hope there is a space for saving the agreement and implementing it,” she said.

While US President Donald Trump’s administration has signalled it will withdraw from the treaty, it has not taken steps to put the decision into practice.

The US and NATO say Russia’s 9M729 missile system, also known by the designation SSC-8, breaches the treaty, which prohibits ground-launched missiles with a range of between 500 and 5,500 kilometres.

Washington says repeated attempts to persuade Russia to come back into compliance since 2013 have been met with silence or obfuscation.

Trump and his Russian counterpart Vladimir Putin discussed the INF treaty during a brief conversation at World War I centenary events in Paris last week.

Putin discussed possible Russian retaliation with top Russian Defence Ministry officials and added that the Kremlin was ready to discuss the INF treaty with Washington.

The Cold War-era treaty, which rid Europe of land-based nuclear missiles, has come into question against a backdrop of renewed tensions between the West and Russia, most notably over Moscow’s 2014 annexation of Crimea and role in eastern Ukraine.

U.S. President Donald Trump’s administration has accused Russia of non-compliance with the 31-year-old missile accord and warned it will pull out of the deal as a result. The Kremlin denies violating the pact.

NATO and Russian envoy addressed the dispute during rare talks on Oct. 31, with NATO Secretary-General Jens Stoltenberg urging Moscow to make quick changes to comply in full with the treaty. He said Russia’s development of the land-based, intermediate-range SSC-8 cruise missile posed “a serious risk to strategic stability”.

European leaders worry that any collapse of the INF treaty could lead to a new, destabilising arms race.