The EU responded on Thursday (16 May) to US accusations that a new European military pact risks shutting out American companies of the bloc’s defence projects and undermine NATO.

In the letter seen by EURACTIV, signed by two senior EU officials, Brussels entirely rejects US demands, adding the EU “remains fully committed to working with the US as a core partner in security and defence matters” despite the planned changes.

US Secretary of State for Armaments Ellen Lord had earlier sharply criticised the EU’s military plans in a letter to EU foreign policy chief Federica Mogherini sent on 1 May.

Washington said it was “deeply concerned” that rules governing the multi-billion European Defence Fund (EDF) as well as the Permanent Structured Cooperation (PESCO) on military cooperation in Europe would “produce duplication, non-interoperable military systems, diversion of scarce defence resources and unnecessary competition between NATO and the EU”.

US officials warned the proposed rules “would not only damage the constructive NATO-EU relationship we have built together over the past several years but could potentially turn the clock back to the sometimes divisive discussions about EU defence initiatives that dominated our exchanges 15 years ago.” 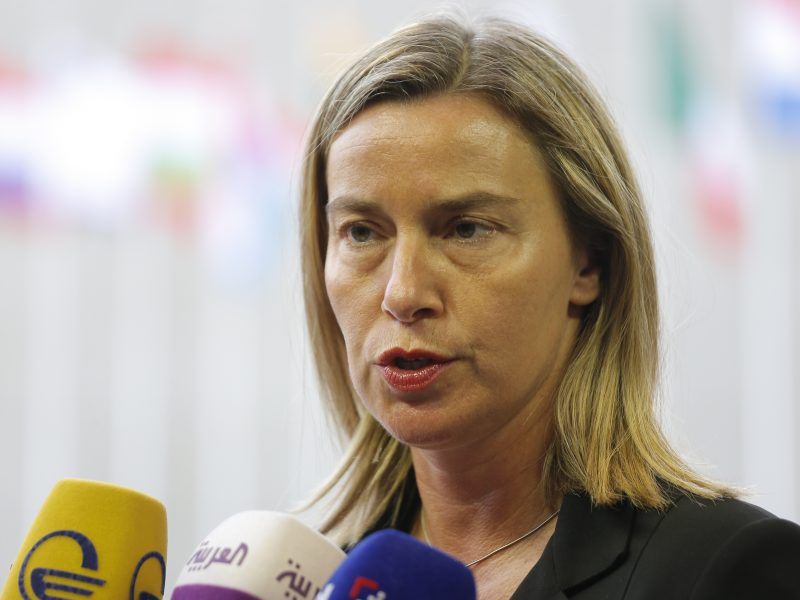 Pentagon warns EU against blocking US firms from defence fund

In the latest sign of the deteriorating transatlantic relations, Washington has warned its European allies that a new European military pact risks shutting American companies out of defence contracts and undermining NATO, and has hinted at possible retaliation.

In Brussels, the tone and content of the US letter had caused considerable irritation, with diplomats speaking of “cheeky demands” and a presumptuous attitude of the Trump administration.

In Thursday’s response to US defence officials, seen by EURACTIV, EU officials shot back, saying “the EU remains fully committed to working with the US as a core partner in security and defence matters.”

The letter, is not signed by Mogherini herself but by the deputy Secretary General of the EU External Action Service, Pedro Serrano, and Timo Pesonen, Internal Market Director-General of the European Commission.

The four-page missive states that the EU wants to “clear up misunderstandings”, and stresses that “both, EDF and PESCO are not meant to compete with NATO, as feared by the US side” but are rather aimed at strengthening EU member states investments in the bloc’s common defence, and enable them to “fulfill their obligations to NATO”.

Since taking office, US President Trump has repeatedly told European allies to increase their defence spending and “pay their fair share in burden-sharing” to the Alliance or risk losing America’s military protection. Those comments were particularly aimed at Germany, which currently spends less than 2% of its GDP on defence, its target for 2024.

Under Trump, the US had also been critical of Europe’s attempts at more autonomy, despite support from NATO chief Jens Stoltenberg.

Although remaining largely calm in language, the EU letter, however, contains no concessions to Washington. This can be seen as an indication that the EU does not intend to open PESCO military projects to participation from third countries.

In recent months, the bloc has struggled to establish rules for non-EU countries such as the US, Norway or post-Brexit Britain to participate in future defence projects.

It is also possible for third-country companies, for example in the US, to benefit from the fund, on condition that they participate in a consortium and that the money goes to their affiliated EU partners.

The rules, the letter clarifies, have been decided jointly by the EU and are “objective and should protect legitimate security interests.”

In its response, Brussels retorts that the US, which dominates the global weapons market, should award more defence contracts to European companies and end export control regulations that limit the EU’s ability to use capabilities developed with US technology.

“The transatlantic trade balance is resolutely in favour of the US,” the letter stressed, echoing statements made by the EU’s foreign policy chief earlier this week.

Mogherini said: “Let me be very clear already, and we share this with member states, that the EU is and remains open to US companies and equipment”.

“In the EU, there is no ‘Buy European Act’ – and around 81% of international contracts go to US firms in Europe today,” she told reporters in Brussels earlier this week, referring to the ‘Buy American Act’, which since 1933 obliges the US government to favour American defence companies when acquiring military equipment.

EU diplomats suspect that Washington views EDF and PESCO as levers to establish European industrial champions to rival America’s dominance on the market for military equipment, similar to what happened decades ago when Airbus challenged Boeing’s dominance in the airplane sector.