EU institutions reached a partial political agreement on the European Defence Fund (EDF) this week but decisions on the two major issues – budget and funding eligibility – had to be postponed as the file remains plagued by controversy.

After three trilogues and a series of technical meetings, an agreement was reached between Council and Parliament on the EDF on Thursday (21 February), according to the Romanian EU presidency.

“This is a major step in making European defence cooperation a reality. The European Defence Fund will help member states get better value for taxpayer money, promote a strong and innovative defence industry and raise the EU’s autonomy and technological leadership in defence,” Commission Vice-President Jyrki Katainen said in a statement after the agreement was struck.

The fund was first proposed by the European Commission in November 2016, in an effort to move towards integrated European security and defence policy. The draft regulation of the EU executive specified that the EDF is meant to fund research and development projects and support the European defence industry.

According to the plans, the EDF would receive an estimated €13 billion in the EU’s next long-term budget (MFF) and finance collaborative research projects mainly through grants.

That budget would be divided into €4.1 billion for collaborative defence research, where up to 100% funding is possible, and €8.9 billion to complement member states’ investment by co-financing the costs for prototype development (20%) and the ensuring certification and testing requirements (up to 80%).

This could also include the development of new weapon systems, including the Euro drone, a next-generation fighter jet or a German-French main battle tank.

The provisional partial agreement, however, does not include the final budget, as the EU’s next long-term budget still needs to be approved by the next Parliament in autumn.

The January negotiating round revealed major points of friction between Parliament and member states on the fund’s objectives, ethical control of the actions and the eligibility criteria of the entities and actions financed, as well as the direct or indirect management of the fund. But an interinstitutional agreement was reached on most of the points.

As part of the provisional agreement, a number of amendments were added to clarify the funding eligibility and actions. Under the current draft, only collaborative projects involving at least three eligible entities from at least three member states or associated countries are eligible for funding.

Under the current agreement, companies set up in the EU and not controlled by third countries are eligible, while EU-based third country companies can be considered for the fund.  Companies based outside the EU won’t be able to benefit from funding but can participate in cooperative projects.

It is still unclear if these criteria could ultimately be adapted in favour of the UK, the EU’s biggest military power which is set to leave the Union in March.

The partially agreed text must now be formally approved by MEPs and ministers, a possible vote in the Parliament’s plenary could take place in mid-April.

“The problem, however, is that this is not definite and we will have to come back to the file anyway after the new MFF budget has been agreed,” a Parliament source told EURACTIV, indicating that changes are possible afterwards. 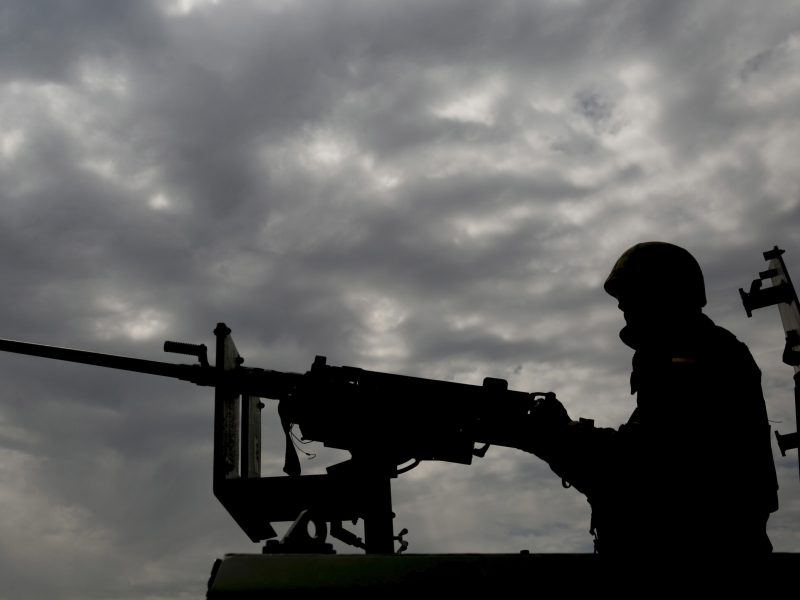 The EDF is also supposed to incentivise cross-border participation of small and medium-sized enterprises (SMEs).

According to the Commission, between 4% and 8% of the EDF budget is meant to be allocated to “disruptive, high-risk innovation.”

Ethical concerns such, as research on autonomous weapons or possible arms exports, were some of the controversial matters in the last discussion rounds.

The Greens/EFA group pushed for ensuring that funding from the EDF will not be allocated to lethal autonomous weapons systems (LAWs), or so-called ‘killer robots’.

While there has been no consensus on the issue at the UN level for more than two years, the 28 member states were able to agree on a common definition.

For some in the Parliament, it was, however, regrettable that lawmakers gave up their position on delegated acts, which means that they will not have any parliamentary scrutiny over the Fund.

“A right-wing majority in the European Parliament has reached a provisional agreement with the Council that the European Defence Fund should distribute billions of euros to the defence industry without any parliamentary involvement. Numerous parliamentary positions, which had found a majority in the Industry Committee, were sacrificed in the process,” Reinhard Bütikofer, Greens/EFA spokesperson on defence said after the meeting.

Another source close to the negotiations told EURACTIV, that it was “shocking” how easily EU lawmakers gave leeway to the member states.

“Council and EPP even argued, however unsuccessfully, that lobbying events should be allowed to be paid for directly from the Fund,” Bütikofer added.

The lack of transparency in the process was also criticised by several NGOs. After the European Network Against Arms Trade filed a complaint to the European Ombudsman, the Commission will publish the minutes of advisory group meetings on military research that laid the ground for the EDF.