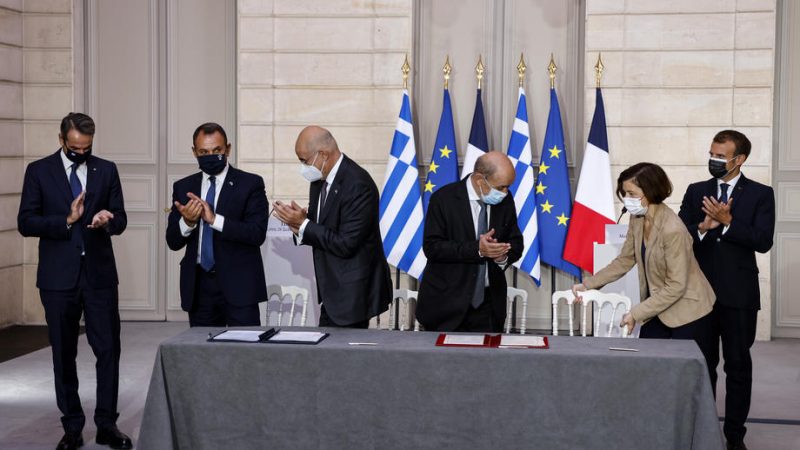 The statement confirms a EURACTIV France’s report on the matter on 6 October which quoted the French foreign affairs ministry as saying that the military agreement only concerns “territories”. [EPA-EFE/LUDOVIC MARIN]

A military agreement recently signed between Greece and France provides for a mutual defence clause which includes the territories of the two countries, but not exclusive economic zones (EEZs), the French ministry of defence told EURACTIV France on Friday (15 October).

The landmark agreement, signed on 28 September, was widely perceived as a first step to achieving European strategic autonomy in defence. It provides mutual assistance in case of an armed attack by a third country, even if the latter belongs to NATO.

“The Parties shall render mutual aid and assistance, by all appropriate means in their possession, if necessary the use of armed force, if they jointly determine that an armed attack has occurred against the territory of one of them, in accordance with Article 51 of the Charter of the United Nations”, reads Article 2 of the military agreement.

However, the French defence ministry told EURACTIV France in a written statement that exclusive economic zones are not part of the deal.

“The exclusive economic zone (EEZ) is not considered to be part of the territory of a State, notably by the United Nations Convention on the Law of the Sea (known as the Montego Bay Convention), to which France and Greece are parties,” the ministry said.

The statement confirms a EURACTIV France’s report on the matter on 6 October, which quoted the French foreign affairs ministry saying that the military agreement only concerns “territories”.

The issue has caused a political clash in Athens between the ruling New Democracy party (EPP) and the leftist main opposition Syriza party.

The latter did not ratify the agreement in a parliamentary vote, arguing that France should clarify EEZ as part of the military deal. Neighbouring Turkey, a NATO member, has long questioned Greece’s EEZ.

On the other hand, Greek PM Kyriakos Mitsotakis insisted in a parliamentary debate that the International Court of Justice has accepted an armed attack as an invasion and use of force against another state military unit, “even outside the stricto sensu territory”.

“This is why no military agreement globally makes reference to an EEZ or a continental shelf”, the Greek PM said.