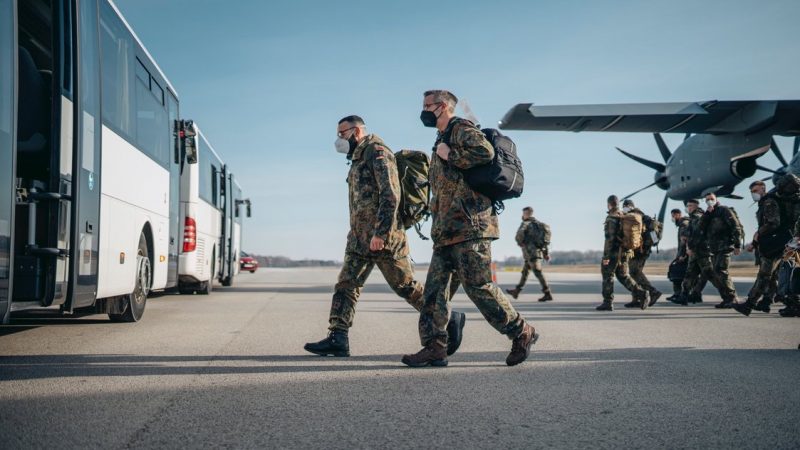 A German army convoy of 130 soldiers and 60 vehicles reached Lithuania on Thursday (17 February), bringing almost half of planned reinforcements for the country’s German-led NATO battlegroup amid fears of a Russian invasion of Ukraine.

US President Joe Biden said on Thursday there was now every indication Russia was planning to invade Ukraine, including signs Moscow was carrying out a false flag operation to provide a pretext, after Ukrainian government forces and pro-Moscow separatists traded fire.

Lithuanian President Gitanas Nauseda said he was assured by German Chancellor Olof Scholz on Thursday in Brussels the German soldiers are authorized fight to defend Lithuania.

“The German army is on our territory to defend us, and if there’s a threat to Lithuania, they are really ready to do their duty,” Nauseda said.

The German reinforcement operation will continue until the end of the week, bolstering German forces in Lithuania by more than 350 soldiers and 100 vehicles, Enhanced Forward Presence battlegroup commander Lieutenant-Colonel Daniel Andrae said.

“We have proven that we are capable of bringing in forces at short notice from long distance,” he told Reuters.

The Ukraine crisis has prompted the US-led NATO alliance to shore up its presence along its eastern flank in member states, including Lithuania, closer to Russia or Ukraine.

The convoy of artillery and reconnaissance units set out on Tuesday from Jaegerbrueck in eastern Germany and travelled overland through Poland. It will be followed by howitzers on heavy transport transporters in the next 2-3 days.

Norway will also increase its part in the German-led battlegroup by 50-60 soldiers for the next three months, bringing the total number of NATO troops there to 1,610, Lithuanian Defence Minister Arvydas Anusauskas said.

Britain said it would double the size of its forces in nearby Estonia where it heads a similar NATO battlegroup.

NATO has set up four multinational battlegroups in Estonia, Lithuania, Latvia and Poland in 2017 after Russia annexed the Crimea region from Ukraine.

With tanks and over 5,000 troops, the battlegroups are set up to act as a tripwire and buy time by holding off any assault until reinforcements arrive.