Germany commits to NATO spending goal by 2031 for first time 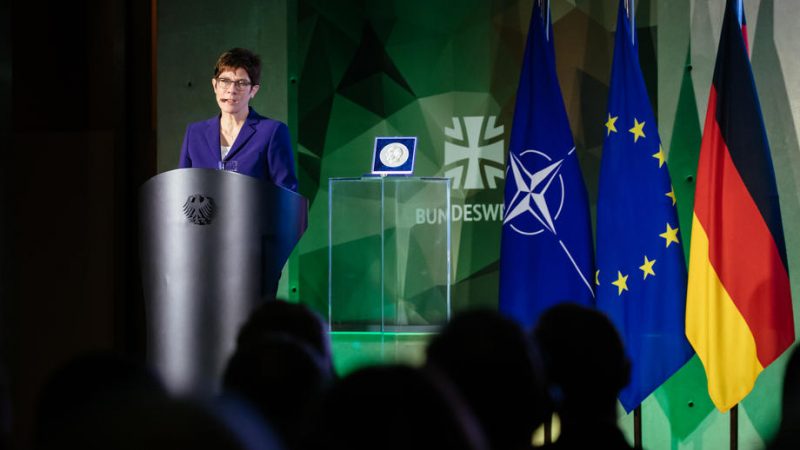 Germany will reach a NATO defence spending target by 2031, its defence minister said on Thursday (7 November), missing a 2024 deadline agreed by the allies who are under heavy US pressure to beef up their military budgets.

Defence Minister Annegret Kramp-Karrenbauer said Germany would spend 2% of its economic output on defence by 2031, belatedly reaching the goal set by NATO leaders at a 2014 summit, months after Russia’s annexation of Ukraine’s Crimea peninsula.

“NATO is and will remain the anchor of European security. But it is also clear that Europe must increase its own complementary ability to act,” Kramp-Karrenbauer told a private event to honour NATO Secretary-General Jens Stoltenberg on Wednesday night.

“This starts with the defence budget. We need (to spend) 1.5% by 2024 and 2% by 2031 at the latest,” she said, according to quotes of the speech provided by her office, the first time she has publicly committed to the target to an international audience and weeks before the next NATO summit on Dec. 4.

However, she said the target was not because “others are calling for it but because it is in the interest of our own security”.

Only seven NATO countries currently meet or exceed the 2% target – the United States, Britain, Greece, Poland and the three Baltic states, Latvia, Lithuania and Estonia. Germany is Europe’s biggest economy, and the second biggest in the NATO alliance after the United States.

Before Kramp-Karrenbauer, seen as a potential successor to Chancellor Angela Merkel, took up her post this year, Germany’s fiscal plans saw defence spending falling slightly to 1.24% in 2023, but the minister said she was determined to increase spending, as polls show a shift in German public support for the move.

Years of defence cuts after the end of the Cold War have left Europeans without vital capabilities, including in Germany, which is one of the last NATO allies to fly ageing Tornado fighter planes that are becoming harder to repair as spare parts become scarce.

Kramp-Karrenbauer’s comments came after she expressed a willingness for Germany to contribute more of NATO’s running costs, taking some of the burden off the United States.

Germany’s earlier reluctance to spend more on defence, in a country that is home to U.S. troops in Europe, has been a sore point for U.S. President Donald Trump, who has openly questioned NATO’s continued value to Washington.

His envoy to Berlin, Richard Grenell, said in August that it was “offensive to assume that the U.S. taxpayers continue to pay for more than 50,000 Americans in Germany but the Germans get to spend their (budget) surplus on domestic programmes”.

Poland and the Baltic states, fearful of a more assertive Russia after it annexed Crimea, have raised their military spending to the 2% target, drawing praise from Trump.

U.S. complaints about Germany’s defence spending pre-date Trump but bilateral relations have deteriorated since he became president. The two allies disagree on a range of issues, including Iran, trade tariffs and the NordStream 2 gas pipeline from Russia to Germany.