“American taxpayers no longer feel like paying too much for the defence of other countries,”  said Richard Grenell, who earlier this month formally resigned as ambassador to join Donald Trump’s 2020 reelection campaign.

“No one should be surprised that Donald Trump is pulling troops and bringing them home. There has been a lot of discussion,” the outgoing ambassador said, adding that the withdrawal of troops was also discussed at the NATO summit in December.

According to Grenell, troops are also to be withdrawn from Japan and South Korea.

His remarks come after media reports suggested last week that US President Trump has ordered the US military to remove 9,500 troops from Germany.

The announced move raised eyebrows in Germany, but also back in America, where Republican lawmakers expressed concern about a possible partial withdrawal.

“We believe that such steps would significantly damage the United States’ national security and strengthen Russia’s position to our detriment,” read a letter to Trump, signed by more than 20 Republican House Armed Forces Committee members.

While it is believed that NATO allies like Germany should contribute more to the common defence, the reduction in US soldiers in Europe could lead to “further aggression” from Moscow, they warned.

Meanwhile, official communication coming from Berlin this week suggested that the US government might not have sought close consultations with its ally Germany on the strategic issue.

“The German government has been informed that there are considerations in the US administration to reduce the presence of the US armed forces in Germany,” deputy government spokeswoman Ulrike Demmer told reporters in Berlin on Wednesday (10 June).

“As far as we know, there is no final decision yet,” she added, emphasising that the federal government had only been “informed” about Washington’s intentions.

Grenell’s statement came only a day after German defence minister Annegret Kramp-Karrenbauer (CDU) insisted that the government cannot speculate on the media reports of the withdrawal of US troops from the country and has not been officially notified. 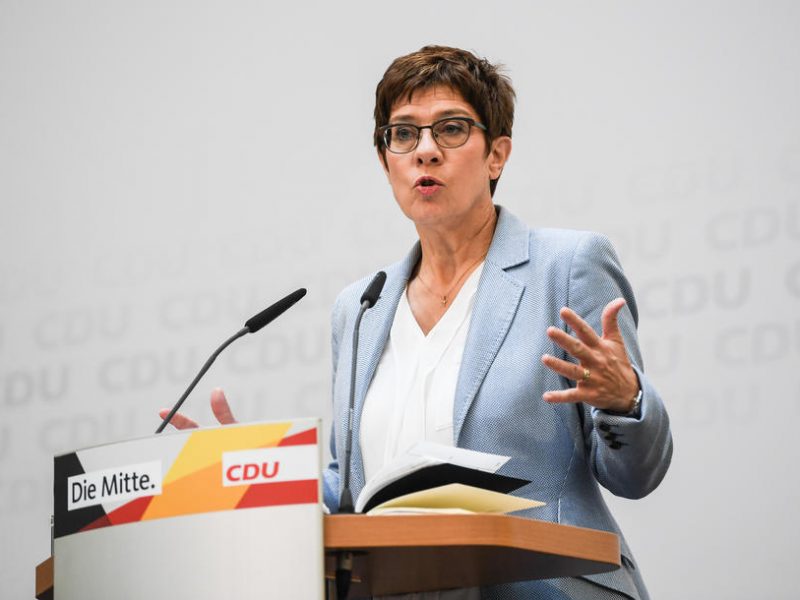 Germany’s defence minister Annegret Kramp-Karrenbauer (CDU) insisted on Tuesday (9 June) that the government cannot speculate on the reported withdrawal of US troops from the country, as it has so far only seen the news report and has not been officially notified.

Earlier on Tuesday, Kramp-Karrenbauer suggested that, if Washington were to go ahead with the withdrawal, this could have adverse consequences for both the US and NATO.

“The fact is the presence of US troops in Germany serves the entire security of the NATO alliance – so American security too. That is the basis on which we work together,” she told reporters in Berlin in response to reports that the Trump administration had ordered the reduction in the number of US soldiers stationed in Germany by 9,500 to 25,000.

Currently, there are 34,674 US military personnel stationed in Germany, including 20,774 from the Army and 12,980 from the Air Force, according to a Pentagon deployment report.

There are more US soldiers stationed in Germany than in any other European country, and US military infrastructure in Stuttgart, Germany had been a key hub for securing missions in Afghanistan and Iraq.

The US troop withdrawal plans are the latest twist in relations between Berlin and Washington that have often been strained during Trump’s presidency, as he has pressed Germany to raise defence spending and accused Berlin of being a “captive” of Russia due to its partial reliance on Russian energy.