Germany to ship additional weapons to Ukraine after weeks of stalling 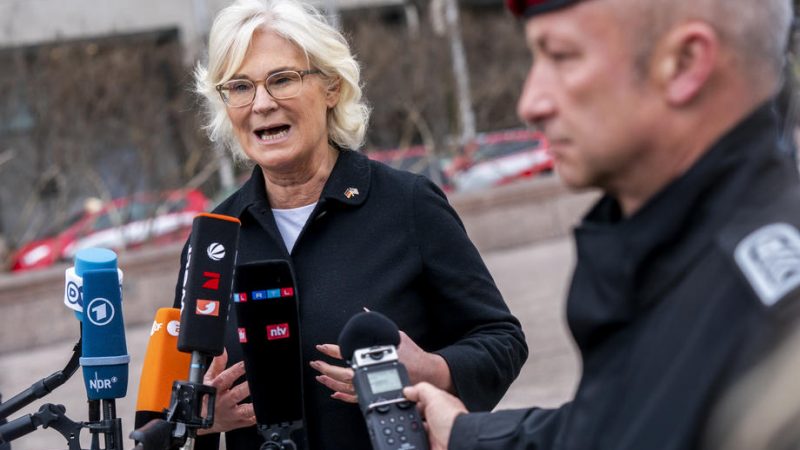 The “situation of our armed forces, is not such that we can provide an unlimited amount”, defence minister Christine Lambrecht said on Tuesday (29 March) during an event at the Atlantic Council. [SHAWN THEW/EPA]

Germany is reportedly preparing to provide Ukraine with weaponry worth €300 million after weeks of protracting shipments from German weapon manufacturers.

While Germany is the fourth-biggest weapons exporter globally, Berlin has relied on its Bundeswehr stock to provide Ukraine with the shipment of armaments instead of involving its sophisticated weapons industry in the procurement process.

However, supply shortages in the Bundeswehr itself have prevented the government from sending more defensive weaponry to Ukraine.

The “situation of our armed forces is not such that we can provide an unlimited amount”, Defence Minister Christine Lambrecht said on Tuesday (29 March) during an event at the Atlantic Council.

According to a leaked document obtained by die Welt on Wednesday, Germany’s biggest weapons producer, Rheinmetall, already offered the German government armaments worth €510 million, which could be provided immediately to Ukraine.

The weapons producer sent the list to the German defence ministry on 28 February – only one day after Germany announced its major U-turn in its restrictive arms exports policy, which had thus far prevented it from sending any weapons to crisis regions.

However, defence minister Lambrecht did not react to the offer up until now. On Wednesday, over a month after Rheinmetall provided its proposal, the defence ministry reportedly green-lighted the procurement of weaponry worth €300 million.

According to information obtained by Süddeutsche Zeitung, the German Federal Security Council will now deliberate the procurement, which consists of various equipment ranging from mortars and rocket launchers to protective vests and helmets.

While Lambrecht has “no objections” to the additional purchase of weapons, it is unclear who will conclude the contracts and who will pay for the weaponry in question.

“It is very frustrating that for three weeks, the federal government has given no response at all to our list of urgently needed defensive weapons,” Ukrainian Ambassador to Germany Andriy Melnyk told die Bild last week.

Defence minister in the crossfire

Lambrecht, who had no experience in the defence sector before her position as defence minister, has been a frequent target of criticism over her performance since the war in Ukraine started.

While the German government already promised to deliver 500 Stinger rockets and 1000 rocket launchers following the onset of the war, it took the defence ministry weeks until they were logistically able to ship the promised armaments to Ukraine.

More recently, the defence minister has been embroiled in a controversy surrounding her statement on Monday that Germany would be the “second-largest weapons supplier of Ukraine.”

The defence ministry later had to backpedal, with its spokesperson David Helmbold stating on Wednesday that Germany would only be the second-largest weapons supplier of Ukraine when it comes to the total weight, not the value, of the shipments.

However, he claimed that Germany would be the third-largest supplier by total value, at least “I think so,” the spokesperson said, without providing any evidence.

The Ukrainian ambassador in Berlin, Andriy Melnyk, refuted the statement. “Ukrainians would like to see Germany, the world’s fourth-largest arms exporter, make it into the top three arms suppliers. At the moment, unfortunately, the government is miles away from that,” he told die Bild on Wednesday.