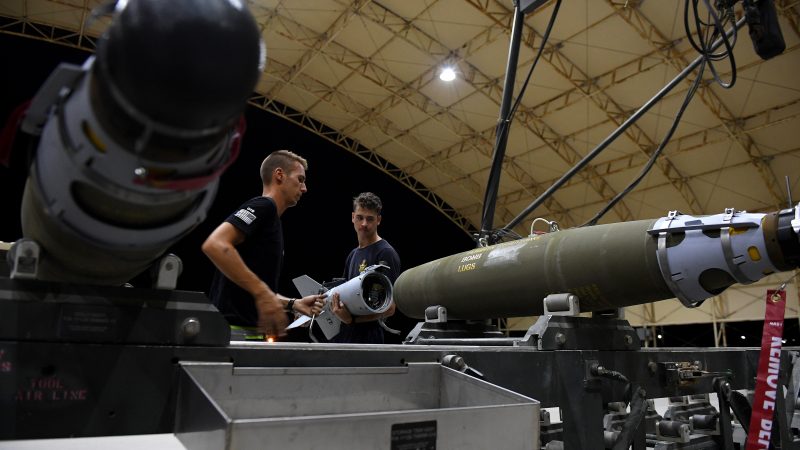 According to the latest SIPRI data, global military spending in 2018 has reached its peak since 1988. [EPA-EFE/DAN HIMBRECHTS]

World military expenditure is estimated to have hit $1822 billion in 2018 – a 2.6% increase compared to 2017. The rise was fuelled by the growing perception of security threats and global crisis hotspots, SIPRI Director Aude Fleurant told EURACTIV on Monday (29 April).

“Additionally, many states are modernising their arsenal with major arms procurement programs, which adds to the cost of new weapon systems,” she said.

According to the SIPRI data, the United States remains the biggest defence spender, recording an increase of 4.6% to $649 billion compared to 2017.

“It should be said that the US is significantly higher than any other country when it comes to military spending,” said Fleurant.

The SIPRI director, however, pointed out that Washington’s lead position is not just due to the so-called Trump-effect: “We see the impact of decision-making prior to Trump, with a range of decisions that were already made under the Obama administration.”

“These programmes usually take decades and a long time until it properly shows in the numbers, but Trump has added to it to a certain extent and the projects are currently being implemented,” she said, adding it is now much about development costs for new systems.

China, occupying the second place in the ranking with a 5% increase to more than $250 billion, recorded a 24th consecutive year of increased military expenditure.

But while part of the spending is meant as a deterrent for US strategies in the region, Beijing is also investing heavily in new weapons technologies.

“China has a very unique way of looking at its military expenditure. A lot of the effort is to modernise their own military equipment,” said Fleurant.

Over the past decade, China’s defence spending has risen by 83%.

“Conversely to many Western European and North American countries, China pegged its military expenditure at 1.1% GDP every single year. If there is strong growth in China, military spending will increase accordingly – and vice versa.”

But while Washington and Beijing spent significantly more during the past year, Russia, one of the world’s largest spenders on military equipment, fell from fourth to sixth place in 2018.

“It has decreased by 2.5% which for the country is quite significant in value. They are in between two major arms modernisation programmes right now,” said Fleurant.

One of the reasons for the decrease in numbers was a delay in payment to the Russian arms industry, which artificially distorted the data. Researchers, however, point out that another factor was the depreciation of the country’s currency.

Despite a 6.5% decrease in its military spending between 2017 and 2018, Saudi Arabia remained the world’s third-largest spender, with an estimated total of $67.6 billion, followed by India and France.

Total military expenditure also increased in Europe by 1.4% to $364 billion in 2018 with a rise noted particularly in Central and Eastern Europe.

“The increases in Central and Eastern Europe are largely due to growing perceptions of a threat from Russia,” said Pieter Wezeman, a senior researcher with the SIPRI Arms and Military Expenditure (AMEX) programme.

“This is despite the fact that Russian military spending has fallen for the past two years,” he concluded.

According to SIPRI, military expenditure by the 29 NATO members was $963 billion in 2018, accounting for 53% of total world spending.

Germany, which in recent months has come under significant pressure from Washington inside the Alliance for missing the pledged 2% NATO spending target, ranks eighth, spending 1.2% of GDP and $49.5 billion. According to the SIPRI database, German military spending rose by 9% between 2009 and 2018.

SIPRI evaluated data from 155 countries, relying not only on official government data on the national defence budgets but also taking into account other sources such as NATO statistics and government responses to United Nations surveys.

Military expenditure in Africa fell by 8.4% in 2018, the fourth consecutive annual decrease since the peak in spending in 2014. Spending by states in the Middle East for which data is available fell by 1.9% in 2018.

“What we can say is that if the current global situation and the drivers, such as participation in armed conflict and modernisation programs, prevail, the growth is likely to continue steadily,” added Fleurant.