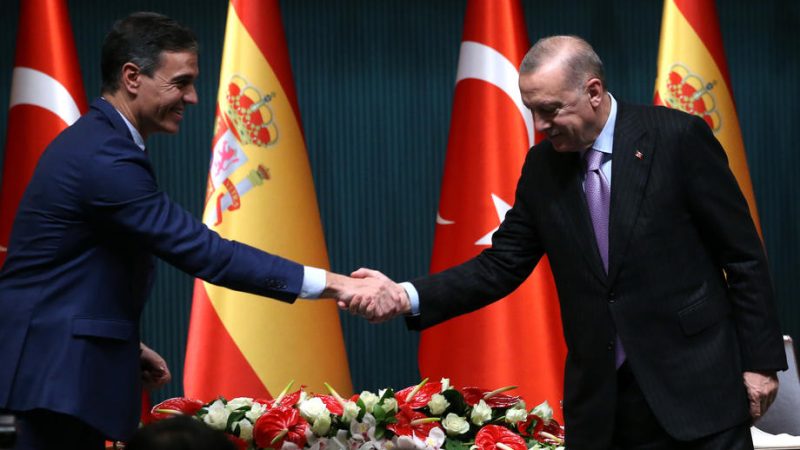 In Athens, critics suggest that the Spanish-Turkish rapprochement is not a coincidence especially after a Greece and France signed a landmark military agreement. [EPA-EFE/STR]

When the two leaders met in Ankara on Wednesday (17 November), Erdoğan praised Sánchez announcing armament programs in cooperation with Spain.

In particular, he reminded that Turkey, in cooperation with Spain, built the amphibious assault ship of the Turkish Navy “Anadolu”, which can be configured as a light aircraft carrier.

The Turkish President also proposed the construction of an even larger aircraft carrier for his country.

“Our goal is to build a large aircraft carrier. Maybe we will make efforts in the submarines field too. We will take these steps. There are many things we can do together in the defence industry,” Erdoğan said.

Erdoğan added that Spain’s stance toward Turkey should be viewed as a “role model” by other EU nations and expressed his satisfaction about the investments of more than 600 Spanish companies in Turkey.

“The presence of Spanish bank BBWA is the most concrete sign of confidence in Turkey,” he said.

Spain has been opposing Greece’s request for EU sanctions against Turkey since the very beginning of the tensions in the Eastern Mediterranean over gas exploration activities.

Greece says Turkey had been violating the international law by conducting gas exploration activities in its territorial waters.

In October 2020, Greek foreign minister Nikos Dendias sent a letter to his counterparts from Germany, Spain, and Italy, pointing out the need to impose an arms embargo against Turkey.

According to official data of the Stockholm International Peace Institute, Spain and Italy are the main European suppliers of weapons to Turkey.

The Spanish-Turkish flirt has annoyed Athens.

Greek government spokesperson Giannis Oikonomou said it “goes without saying” that EU member states are bound by the decisions of the EU Council on matters concerning “relations with Turkey and the latter’s provocations and infringements of the international law”.

“The socialist Spanish prime minister should have taken into account the overall stance of the European Council,” the Greek official said.

In Athens, critics suggest that the Spanish-Turkish rapprochement is not a coincidence especially after a Greece and France signed a landmark military agreement that provides mutual assistance in the event of one party coming under attack by a third country, even if the latter belongs to NATO.

Analysts estimate that Spain does not see France’s increasing involvement in the Eastern Mediterranean in positive light.

Sánchez’s push for closer ties with Turkey also drew the criticism of the main opposition party in Spain.

Pablo Casado, leader of the centre-right People’s Party, stressed that his party continues to support the territorial integrity of Greece and Cyprus.

“After Sánchez’s visit to Turkey, we at the People’s Party (PP) reiterate that we stand for the territorial integrity of Greece and Cyprus as members of the European Union and respect for human rights and the common security and immigration policy in our international relations,” he said.

One response to “Greece fumes over new Spain-Turkey armament deal”