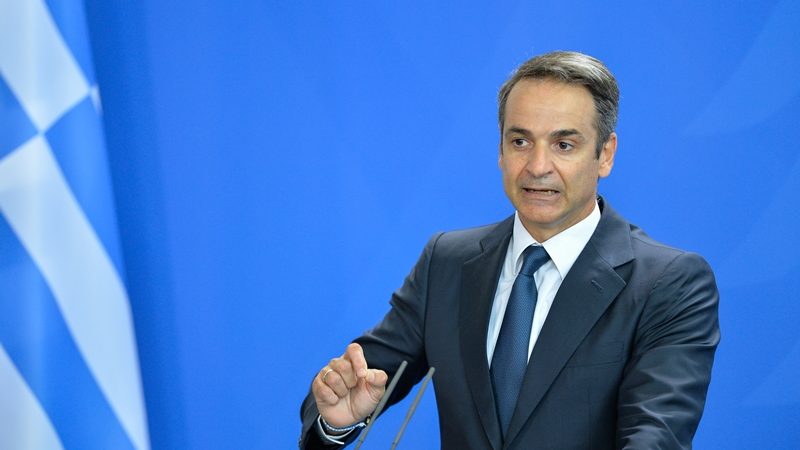 Mitsotakis: “We have the means and the will to defend our national sovereignty when and if needed.” [Shutterstock]

According to the draft EU Council conclusions, the EU leaders are expected to condemn the Memorandum of Understanding (MoU) Turkey recently signed with Libya to demarcate maritime zones in the Mediterranean, a move that triggered strong negative reactions in Athens, Nicosia and Cairo.

“The Turkey-Libya Memorandum of Understanding (MoU) on the delimitation of maritime jurisdictions in the Mediterranean Sea infringes upon the sovereign rights of third states, does not comply with the Law of the Sea and cannot produce any legal consequences for third states,” the draft conclusions read.

“The European Council unequivocally reaffirms its solidarity with Greece and Cyprus regarding these actions by Turkey,” the document adds.

Following Turkey’s move, Greece and Egypt decided to speed up discussions for the demarcation of the Exclusive Economic Zones between them.

Sources from the office of Greek Prime Minister Kyriakos Mitsotakis told EURACTIV the main objective is to “internationalise” the issue as much as possible and increase the EU’s diplomatic pressure on Ankara.

In sabre-rattling comments, Turkish President Recep Tayyip Erdoğan said earlier this week Athens “will pay” for its actions over the issue, while Mitsotakis responded his country stands ready to defend its sovereignty.

“We have the means and the will to defend our national sovereignty when and if needed,” Mitsotakis said today, adding that the entire international community backs Greece on the issue. “We have many and strong allies,” he emphasised.

In the meantime, Libyan parliament speaker Aguila Saleh Eissa has sent an official letter to UN Secretary-General Antonio Guterres saying that the Turkey-Libya MoU is invalid and the Libyan House of Representatives does not recognise it.

Erdoğan said on Tuesday he would send troops to Libya to support ErdoFayez al-Sarraj, prime minister of the Government of National Accord of Libya, who signed the MoU with Turkey, if he asks so.

Meanwhile, Italy and France are sending their own diplomatic message to Turkey.

In the framework of defence cooperation, both countries, together with Cyprus, will do a joint naval exercise, “PASSEX”, in the Exclusive Economic Zone of Cyprus.

Both Rome and Paris have high stakes in the region as ENI and Total respectively participate in the gas drillings off Cyprus.

Tsipras also on board

In addition, the leftist opposition leader, former Prime Minister Alexis Tsipras, will participate in the pre-summit of the EU socialist parties.

Sources told EURACTIV that the former premier will ask, first of all, his socialist partners to activate the sanctions against Turkey, which were decided at the June Council, because of Turkey’s illegal gas and oil drilling activities off-Cyprus.

The European Union is set to curb contacts and funding for Ankara in retaliation for what it calls Turkey’s “illegal” drilling for gas and oil off Cyprus and stands ready to ramp up sanctions further, according to a draft statement.

Tsipras will reportedly ask for the expansion of these sanctions to Turkey’s current “illegal activities” off Crete as well.

“If Ankara attempts to do something off-Crete then these sanctions should be automatically activated,” Syriza sources said.