LEAK: What the EU’s future military strategy could look like 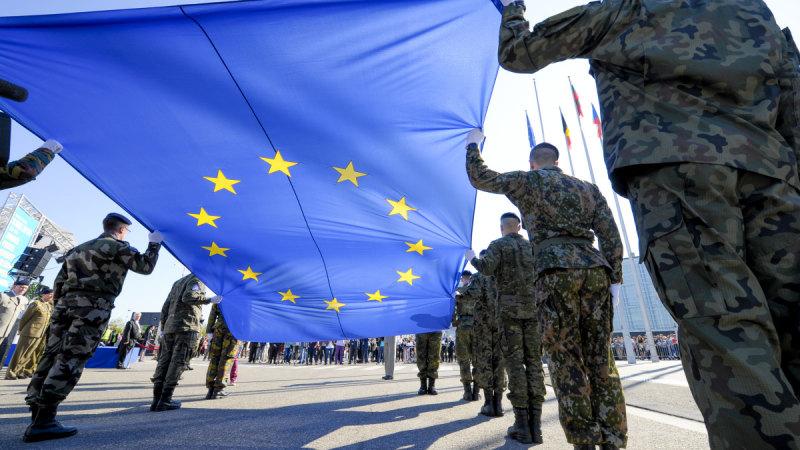 Next to a descriptive list of regional threats facing the bloc, Russia and China feature dominantly in the 28-page document. [European Parliament/Flickr]

While it for the first time maps out threats facing the bloc, it also covers crisis management, resilience, capability developments as well as partnerships, which is meant to “set out a common strategic vision for EU security and defence for the next 5-10 years”.

EU leaders are likely to receive on an amended version in December, while the final document is set to be approved in March next year, during France’s EU Council presidency.

Drawn up by the EU’s diplomatic service (EEAS) and national security agencies, the first part of the EU’s new military blueprint, is meant to cover security risks and trends across the bloc and worldwide.

Next to a descriptive list of regional threats facing the bloc, Russia and China feature dominantly in the 28-page document.

Russia’s “actions in our common neighbourhood and in other theatres contradict the EU’s vision of the world and its interests”, the draft states, adding however that “the EU strategy aims at engaging Russia in some specific issues” such as climate.

Several EU diplomats contacted by EURACTIV have stated that the threat from Moscow should have been better specified by including military threats and occupation, weaponising energy supply and hybrid actions, and that they plan to table amendments.

According to the draft, China is “a partner, an economic competitor and a systemic rival”, which is “increasingly both involved and engaged in regional tensions”.

“Despite China’s growing assertiveness, we will continue to cooperate in areas of mutual interest such as countering piracy and climate and security,” the draft states.

However, in a reference to internal divisions among member states how to best deal with Beijing, it warns this would “require strong unity” among the bloc.

According to the blueprint, national intelligence agencies would be asked to review the EU’s Threat Analysis in a frequency of “at least every 5 years, starting in 2025, or sooner if the changing strategic and security context calls for it.”

One of the more controversial blueprint proposals is the creation of a joint military intervention force, dubbed EU Rapid Deployment Capacity, by 2025 that will “allow to swiftly deploy a modular force of up to 5,000 troops, including land, air and maritime components”.

In the wake of the Afghanistan crisis, EU member states over the summer had discussed ideas for an initial entry force and the possibility to move towards ad-hoc military cooperation between interested EU member states.

According to the draft, the force is meant to “respond to imminent threats or quickly react to a crisis situation, for example, a rescue and evacuation mission or a stabilisation operation in a hostile environment”.

The capacity of the force will be based on ‘operational scenarios’, but the blueprint leaves open who will define such.

It should consist of “substantially modified EU battle groups and of member states’ other military forces and capabilities,” the proposal says, adding this would include regular joint live exercises from 2023.

Command and control would lie with pre-identified national operational headquarters or a body within the EU’s Military Staff (EUMS).

Some EU diplomats contacted by EURACTIV said they’re worried about “adding more new tools, while not using the potential of existing ones.”

The EU’s already existing battle groups have never been used due to disputes over funding and a reluctance to deploy.

A question of unanimity?

Up to date, any such operations would require unanimity among all member states, which has proven to be a contentious issue in crisis situations.

To avoid slow decision-making processes, the draft proposes “more flexible decision-making arrangements” and an “extended scope of common costs (including the costs of exercises) to contribute to the rapid deployability of this capacity.”

This would also include the use of constructive abstention “to enable willing and capable European-led coalitions”.

By 2023, the idea is to specify how the EU treaty’s Article 44 would allow a group of member states to plan and conduct a mission or operation within the EU framework.

An Eastern European diplomat told  EURACTIV some countries in the region would be open to discussing improving decision-making processes, but “unanimity needs to remain the guiding principle”. 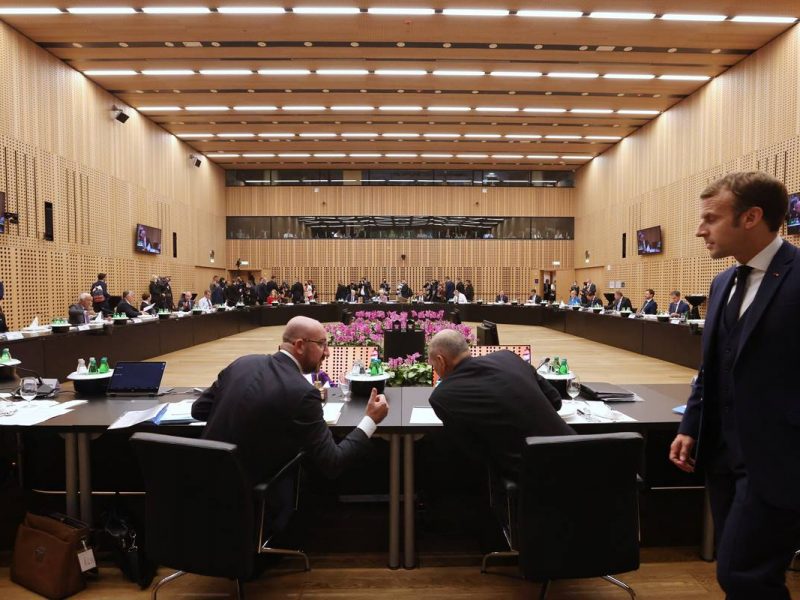 Amid disunity over the way forward on European defence, EU leaders discussed on Tuesday night (5 October) whether the bloc should enhance its capacity to act independently while strengthening its partnership with NATO.

Strategic autonomy, the EU’s aim to act more independently in its foreign and security policy, features only once in the 28-page blueprint.

“Recent geopolitical shifts remind us that the EU urgently needs to take more responsibility for its own security by acting in its neighbourhood and beyond, with partners whenever possible and alone when necessary,” the draft states.

This is described as an “ability to work with partners to safeguard its values and interests”.

On EU-NATO relations, it makes a reference to the upcoming new EU-NATO joint declaration, to be presented before the end of the year, as key compass for future cooperation.

As of 2022, the EU also plans to move forward with a dedicated security and defence dialogue with the US as agreed in the joint June summit earlier this year.

The draft proposal also states the EU remains “open to engage with the United Kingdom on security and defence” and pledges to strengthen dialogues with the Western Balkans, the eastern and southern neighbourhoods, the Indo-Pacific and Latin America.

Notably, the strategy would see the EU expand maritime presences in areas of interest, starting with the Indo-Pacific, which would include more frequent EU port calls and patrols and live maritime exercises with regional partners Japan, South Korea, India, Indonesia and Vietnam.

The document includes a range of new ways and means to enhance resilience to tackle hybrid threats, including the pledge to create EU Rapid Hybrid Response Teams, and ensure cyber deterrence.

“We must be able to swiftly respond to cyberattacks,” the document states in reference to the use of the EU’s Cyber Diplomacy Toolbox, which would include imposing sanctions on external actors for malicious cyber activities.

By the end of 2023, the EU would adopt a strategy to address risks and incidents in the space domain and threats to the bloc’s space program.

The blueprint also refers to a recent assessment that had urged EU governments to focus on “six next-generation capabilities” like a new battle tank (MBT), patrol vessels, defence in space, air systems and enhanced military mobility.

It also states that national defence budgets should grow in the coming years, but falls short of asking for concrete commitments.

However, it states that member countries should aim to ramp up their financial commitments to the EU’s collaborative defence initiatives, such as the European Defence Fund, in the next EU budget after 2027.

The proposal also pledges to establish a Defence Innovation Hub within the European Defence Agency by 2022.

However, one EU diplomat, speaking about the timeline of most proposals included in the blueprint, told EURACTIV it comes as a surprise that many of them are rather short term.

“What I am surprised about is that we always understood that the strategy should look up to ten years ahead, but most proposals I see have a target date until 2025,” the diplomat said.

“What we haven’t achieved in decades, is now supposed to happen in the range of a few years – this seems a bit curious to me,” he added. 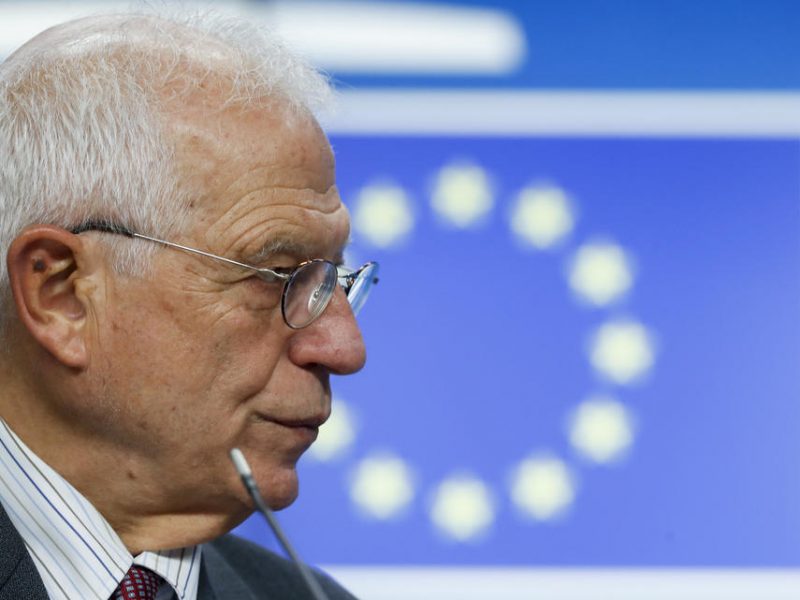