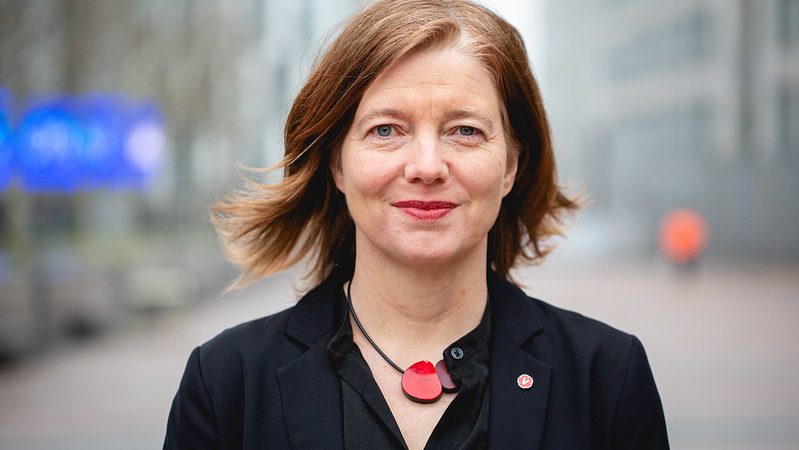 Sweden’s ruling Social Democrats have not given proper treatment to the subject of the country’s possible NATO membership, a move that could raise tensions in northern Europe and therefore requires a wider democratic debate, a Swedish EU lawmaker told EURACTIV in an interview.

“I am quite surprised about how the Social Democratic Party is handling this in terms of the democratic process,” said Malin Björk, a Swedish MEP for the Left group in the European Parliament and a member of the Parliament’s Foreign Affairs Committee.

Björk comes from the Swedish Left Party, one of the rare parties in the Swedish Riksdag that opposes NATO membership.

According to Björk, the Social Democrat Party’s handling of the NATO debate in Sweden should raise alarms in terms of democratic proceedings.

“Sweden’s military alignment or non-alignment will be decided through a few Zoom meetings. I think it is not democratically responsible.”, Björk said.

She referred to a party board meeting on its NATO policy that the Social Democrats are supposed to have around 15 May, as party secretary Tobias Baudin stated two weeks ago.

Should the party in power adopt a pro-NATO membership position, Sweden could apply to join the Alliance and become a member in the following two weeks, as Norwegian Prime Minister Jonas Gahr Støre hinted last week during the Nordic-India Summit.

However, no referendum would be held in the country, much to Björk and her party’s dismay. On 28 April, the Left Party leader Nooshi Dadgostar called for a referendum on the issue after the autumn elections, much later than the Finnish-Swedish NATO decision, potentially expected this week.

“I think it merits its own democratic process, its own discussion and its own political and democratic space”, Björk said, adding that her party would respect the outcome of a referendum, whatever it may be, but that “ its absence is a very worrying sign”.

She even worried that not having recourse to a referendum on the issue would play into Russian President Vladimir Putin’s hands. “It’s about safeguarding democratic processes and not giving in to Putin. It’s not only about arms, it’s also about what kind of society we are,” she said.

The Swedish Left Party is traditionally attached to the country’s non-alignment status and is radically opposed to a NATO membership.

According to the party’s manifesto, a NATO membership would make it more challenging to pursue an independent and credible foreign policy, while it would risk being forced into wars and conflicts in which Sweden does not want to participate.

“Being part of NATO won’t increase our security, neither in the short term nor in the long term,” Björk said, adding that “we will be attached to other conflicts that are not necessarily ours”.

According to the Swedish MEP, Sweden’s NATO application would entail a rise of tensions that neither Sweden nor Europe would benefit from.

“It would bring an arms race and nuclear arms logic. You can’t get away from that,” she said, adding that it would be the path to a “mutual destruction” that worried her and her party more than a potential Russian attack at the moment.

“The best for our security is to make independent decisions that are based on the security needs of Sweden”, she said, adding that her country should, however, seek collaboration with democratic states, which she believes NATO membership prevents.

“NATO means partnership with (Hungarian PM Viktor) Orbán and with the US, which are led by the Democrats for the moment, but they could have Trump again or something worse,” she said, adding that even the EU would be more potent as a non militarised actor that can “stand up for really the values of the democratic and fundamental rights that we believe in.”

Even though her party is opposed to a NATO membership, Björk denied any support for Putin’s Russia, a label that she called “political rumours” and “bullshit”.

“We are all somewhat afraid and worried about Putin’s military and authoritarian derives, and we have been extremely clear in our criticism”, she said, arguing that an anti-NATO position does not necessarily equal support or even sympathy for the Russian regime.

“The Swedish Left Party has been extremely clear about its position on Putin’s authoritarian regime and denounced it, calling for very tough sanctions,” she argued, recalling that her party had strongly denounced the Russian occupation of Crimea in 2014 and supported the sanctions taken in reaction.

According to her, such accusations amid the NATO debate in Sweden “show how small and limited the space for democratic discussion has become” in Sweden.

“It’s quite bad for democracy to have such a political climate,” she complained, adding that one should be able to claim military non-alignment as a “valid and valuable security strategy”.