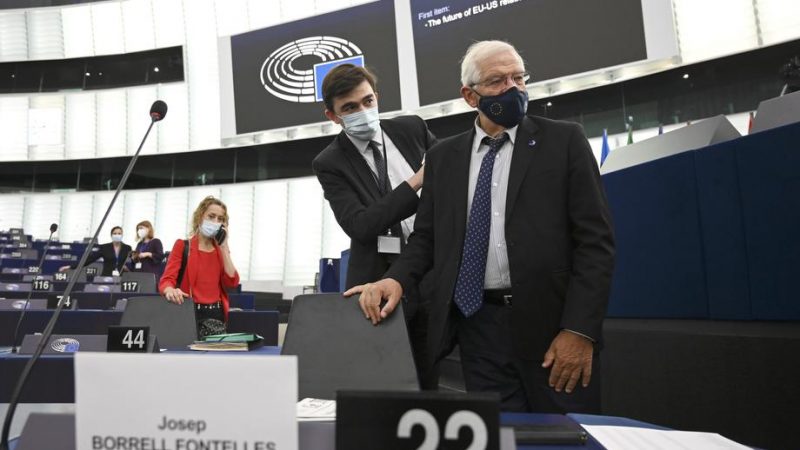 European Union High Representative for Foreign Affairs and Security Policy Josep Borrell attends during a debate on the future of EU-US relations as part of a plenary session at the European Parliament in Strasbourg, France, 05 October 2021. [FREDERICK FLORIN/EPA]

Ahead of voting on a report on the future of the EU-US relations in the European Parliament on Wednesday (October 6), lawmakers discussed EU strategic autonomy and asserted the need for the bloc to keep its American ally close.

“The European strategic autonomy should be pursued,” Croatian MEP Tonino Picula (S&D) told the plenary in Strasbourg, noting that it entails both “the autonomy of decision” and “autonomy of action”.

Picula, a former foreign minister, wrote a report on the future of the EU-US relations, covering trade talks, cooperation in environmental and digital issues, foreign, coordinated policies towards China and Russia, and security.

The timing could not be better for many lawmakers – following criticism of the Biden administration after the uncoordinated US withdrawal from Afghanistan and the diplomacy crisis over the new AUKUS partnership.

AUKUS is the acronym for a trilateral deal between Australia, the United Kingdom, and the United States, announced on 15 September, under which Australia chose nuclear-powered submarines with US and UK technology, scrapping a $40 billion submarine deal with France.

“The honeymoon is over,” said Bern Lange (S&D), rapporteur for the opinion for the Parliament’s Committee on International Trade (INDA). “The submarine deal is certainly something that has not helped to make our relationship more stable”, he noted.

Some MEPs took advantage of this debate to call for further European strategic autonomy, more specifically European defence, mentioned in the report.

While MEP Željana Zovko (EPP) praised the “reality checks” that the past weeks have delivered, her colleague Radosław Sikorski, chair of the delegation for relations with the United States, underlined that “we need to get serious about European defence right now”.

Hilde Vautmans from Renew said that Europe must “launch our own European army, not to weaken NATO but to strengthen it”.

Other MEPs warned that Europe faced a deeper systemic issue in its relations with Washington.

MEP Assita Kanko from the right-wing ECR bluntly said that “the time of multilateralism seems to be totally over” and called on “the EU [to] act accordingly”.

Still, most MEPs seemed to favour a diplomatic approach with the US, stressing the importance of this relationship. “We might not be America’s nearest partner but we are its closest”, MEP Nicolae Ștefănuță (Renew) declared, condemning the “US bashing”.

Speaking ahead of the debate, the top EU diplomat, Josep Borrell, said: “The US remains the European closest and most important strategic partner” and there is no doubt about the fact that “it should continue”.

Some MEPs praised the new Trade and Technology Council (TTC) that held its inaugural session last week as a step in the right direction while stressing that the issue of tariffs on aluminium and steel still needs to be properly addressed.

“EU companies do not pose a threat to US national security”, declared MEP Liesje Schreinemacher (Renew) on the matter.

While the issue of European defence is “no longer a French marauding issue”, according to MEP Nathalie Loiseau (Renew), who spoke to journalists after the debate, transatlantic frictions seem to push the buttons of several French delegations – some of whom are probably still fuming at the American “betrayal” over the AUKUS partnership.

Loiseau explained to EURACTIV that the idea of European defence “is increasingly shared” and that now both Commission and Council heads, Ursula von der Leyn and Charles Michel, are convince. “It will have to happen at member state level too,” she said.

S&D MEP Raphaël Glucksmann said, however, that this report was tinged with a “form of delusional optimism” and told the journalists the French S&D delegation would not vote the report because it does not take into consideration the recent events enough.

“It’s not a question of saying that we shouldn’t cooperate with the US”, he added.

French lawmakers from The Left, long-time opponents of dependence on Washington, are not expected to vote in favour of the report either.

“We need to get away from the tutelage of the United States”, from the “voluntary subordination”, MEP Emmanuel Maurel said.