NATO defence ministers met on Wednesday (26 June) to discuss strategies against the threat of new Russian missile systems, as the landmark nuclear arms control treaty against land-based nuclear warheads is due to collapse next month.

According to NATO diplomats, US and British intelligence suggests that Moscow has conducted tests of the 9M729/SSC-8 ‘Iskander’ nuclear-capable cruise missile system that violate the treaty ban on land-based missiles with a range of 500 km to 5,500km.

“These missiles are capable of carrying nuclear warheads,” Secretary-General Jens Stoltenberg told reporters in Brussels. “They can reach European cities within minutes. They are hard to detect.”

As the new missiles would have a shorter warning time than long-range rockets, they are harder to detect and experts fear this could raise chances of nuclear weapons being used in case of conflict.

The United States is set to pull out of the 1987 Intermediate-range Nuclear Forces Treaty (INF) on 2 August citing Russia’s development of this missile system.

Russia has repeatedly denied its system contravenes the IMF treaty.

Washington and its NATO allies want Russia to destroy it. Moscow has so far refused to do so and denies that it is in violation of the treaty’s statutes, accusing Washington of seeking an arms race.

“We have to prepare for a world without an INF treaty,” Stoltenberg said.

“They will have to bear the full responsibility for the demise of the treaty,” although he said NATO would not place nuclear-capable, land-based medium-range missiles in Europe, as happened in the 1980s.

“Ministers have agreed that NATO will respond should Russia fail to return to compliance,” Stoltenberg said.

Although ministers had decided to move forward with a united response, German defence minster Ursula von der Leyen conveyed the dominating sentiment among  her colleagues. “Should Russia fail to return to compliance,” in the end “the most important thing is unity within NATO,” she said.

Although NATO defence ministers reaffirmed their intention to prevent a nuclear arms race and to refrain from deploying land-based nuclear medium-range missiles in Europe, they were reluctant to communicate their plans as the Alliance struggled to find answers to the new security situation.

They agreed on a package of political and military measures to boost NATO’s defences. This includes expanding their training activities, strengthening intelligence and surveillance, diplomatically seeking a more comprehensive disarmament agreement that incorporates China, and driving forward the development of new conventional weapons systems.

“We will act purely defensive and not reflect Russia’s measures,” Stoltenberg said, referring to a “big range of answers along different timelines”.

“Some of them will be long term, others it will be possible to implement short term or more concretely.”

However, Stoltenberg also spoke of the strengthening of air and missile defence as well as nuclear deterrence to counterbalance Russia’s controversial new missile system.

Ahead of Wednesday’s ministerial meeting, Stoltenberg also declined to rule out that NATO could reconfigure its ballistic missile defence shield in southeastern Europe to counter potential Russian rockets.

Since 2010, the NATO members have invested significant resources in the development of their ballistic missile defence systems, consisting among others of radars, satellites and launchers based in Romania and Poland, which NATO officials emphasise are not designed to target Russia but trained on Iran.

Luxembourg’s Defence Minister François Bausch said that while diplomats would continue urging Moscow to destroy the SSC-8 missile, NATO also needed “a military answer” because the security of Europe was at stake.

Diplomats have echoed such proposals, pointing towards a possible increase in the number of American aircraft fights capable of carrying nuclear warheads, or of a strengthening of nuclear deterrence in Europe through the relocation of US warships with sea-based missile systems.

The meeting, however, also made clear that there is little hope that a US walk-away from the accord before 2 August can be averted.

“Relief from the INF treaty will allow us to do that in a non-nuclear way, in a conventional way. And it also frees us up to deal with not just Russia but China.”

In a bilateral side-meeting with his Turkish counterpart, Hulusi Akar, Esper called on Ankara to abandon plans to acquire the S-400 missile-defense system from Moscow.

According to Pentagon spokesman Jonathan Hoffman, Esper conveyed that Turkey’s purchase would be “incompatible with the F-35 program and that Turkey will not be permitted to have both systems.” 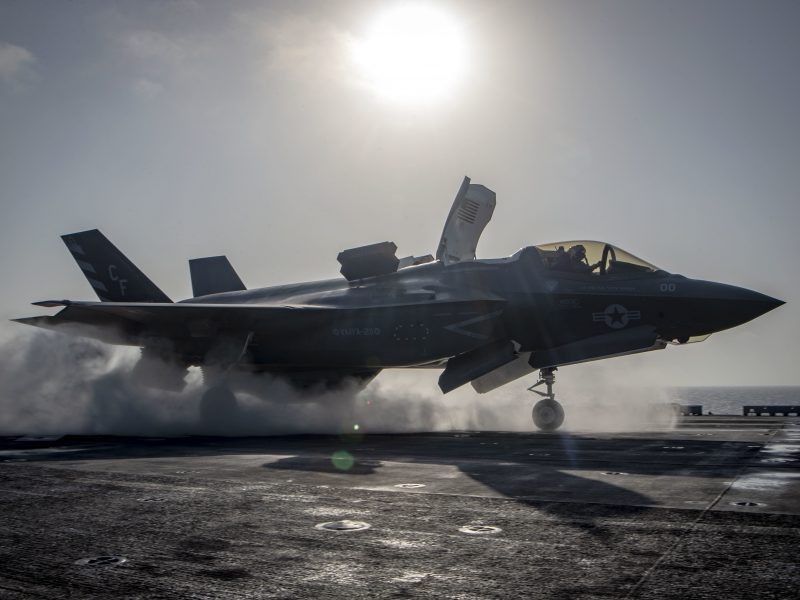 Responding to the statements, Russia’s deputy foreign minister Sergey Ryabkov warned that the Kremlin is “ready for all options”.

The INF standoff “certainly lies with the US and its allies,” Ryabkov warned according to Russian state-owned news agency TASS.

Russia has hinted that such plans can put the world at risk of nuclear war, as in the 1962 Cuban missile crisis.

The missile dispute marks a further worsening of East-West ties that have deteriorated since Russia’s 2014 seizure of Crimea and has prompted fears of an arms race between Russia, the United States and China, which is also developing missiles.

In a final diplomatic push, Stoltenberg also called for a meeting of the NATO-Russia Council next week as a last-ditch bid to dissolve tensions, persuade Moscow to abandon the missiles system and save the treaty.