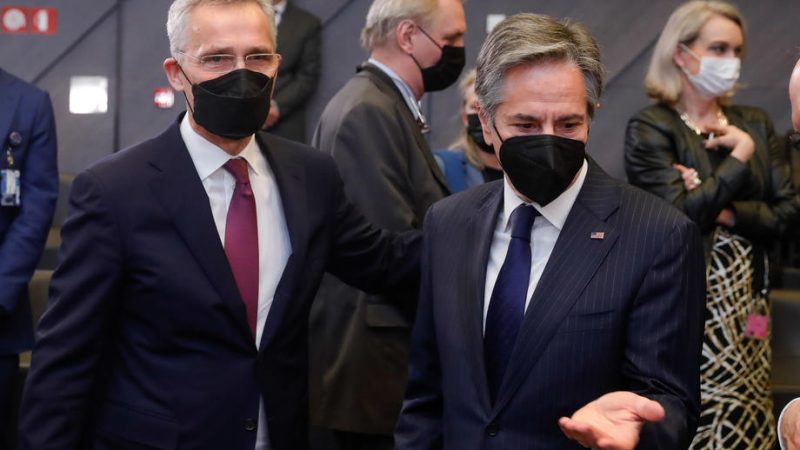 NATO Secretary General Jens Stoltenberg (L) and US Secretary of State Antony Blinken at the start of an extraordinary meeting of NATO Ministers of Foreign Affairs on the Russian aggression on Ukraine at the NATO headquarters in Brussels, Belgium, 04 March 2022. [EPA-EFE/STEPHANIE LECOCQ]

NATO foreign ministers on Friday (4 March) said they would not set up a no-fly zone over Ukraine or involve their troops in any intervention there, but promised other aid to Kyiv.

“Allies agree we should not have NATO planes operating in Ukrainian airspace or NATO troops on Ukraine’s territory,” NATO Secretary-General Jens Stoltenberg said after the meeting.

Ukraine has repeatedly called for Western partners to implement a no-fly zone to reduce the Russian military’s ability to attack Ukrainian targets from the air.

In a video message earlier on Friday, Ukrainian Foreign Minister Dmytro Kuleba said NATO foreign ministers should not allow Putin to “turn Ukraine into Syria,” in reference to the devastating Russia-backed campaign against rebel cities in that country.

“Act now before it’s too late,” he said in the message.

The plea came also as a Russian attack on Ukraine’s Zaporizhzhia nuclear power plant, the biggest such installation in Europe, raised fears of wider implications of a further Russian advance.

NATO members have sent weapons to Ukraine, but are unlikely to move anywhere close to military action.

Establishing a no-fly zone over Ukraine could result in the war triggering a broader conflict and potentially risk spreading it to more European countries, Stoltenberg said, rejecting demands from Kyiv to enforce such a zone.

“The only way to implement a no-fly zone is to send NATO planes, fighter planes, into Ukrainian airspace, and then impose that no-fly zone by shooting down Russian planes,” Stoltenberg said.

“If we did that, we’ll end up with something that could end in a full-fledged war in Europe involving many more countries and causing much more human suffering,” he said.

Security officials contacted by EURACTIV unanimously said they don’t see the option of a no-fly zone materialising ‘under any circumstances’, since any type of incident with an alliance member’s plane would almost certainty trigger NATO’s Article 5, the mutual defence clause.

This is also due to the fact that a no-fly zone means not only air policing and monitoring of airspace, but if declared and a Russian plane would happen to fly into it, it would have to shoot it down.

“So that is the reason why we made this painful decision to impose heavy sanctions, provide significant support, stepping up support, but at the same time not involving NATO forces directly in the conflict in Ukraine,” Stoltenberg added.

Stoltenberg said Russia’s war in Ukraine was “horrific” and repeated calls on Russia to end the war and withdraw its forces.

“This is President Putin’s war, one he has chosen, planned and is waging against a peaceful country,” Stoltenberg told reporters.

“We call on President Putin to stop this war immediately, withdrawal all his forces without conditions and engage in genuine diplomacy now,” he said.

US Secretary of State Antony Blinken said the alliance would defend “every inch” of NATO territory from attack.

“Ours is a defensive alliance. We seek no conflict. But if conflict comes to us, we are ready,” Blinken said.

Support for Ukraine so far has come mainly in the form of far-reaching sanctions on Russia, with EU members on Friday saying more financial punishment was yet to come.

“We will consider everything,” the EU’s chief diplomat Josep Borrell said, when asked about the possible suspension of the EU’s gas imports from Russia.

“This is Putin’s war, and Putin has to stop this war,” Borrell said.

It was not immediately clear, however, when the EU would agree on measures given some countries’ heavy reliance on Russian energy supplies.

The comments came as EU foreign ministers were meeting with their US, UK and Canadian counterparts to ‘crowdsource’ more options for future sanctions and discuss the closure of potential loopholes.