NATO to stay a regional alliance, but could increasingly look towards Indo-Pacific 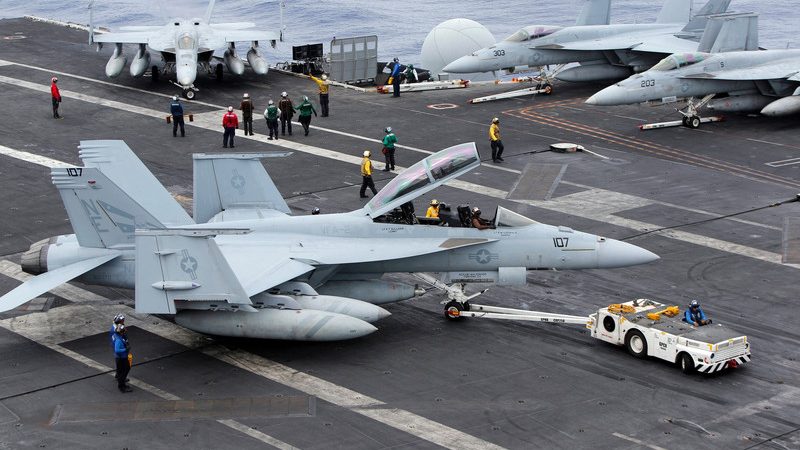 A photo of an US Navy's McDonnell Douglas F/A-18 'Hornet' jet being prepared for a catapult launch from the flight deck aboard the 'USS Ronald Reagan' aircraft carrier at an unspecified position at sea off the coast of Hawaii, USA, on 21 July 2014. [EPA/BRUCE OMORI]

When launching the NATO 2030 reflection process about the alliances future, Secretary-General Jens Stoltenberg specified that “NATO should be stronger politically” and have a “more global approach”.

Earlier this month, US Secretary of State Anthony Blinken encouraged NATO to “deepen” cooperation with its allies in the Indo-Pacific, including South Korea, as it seeks to confront “systematic challenges” from Russia and China.

According to him, NATO’a “traditional” roles, such as protecting allies from Russian aggression, would be still relevant.

“However, the Alliance will need to look at far more political questions in the future, such as how we unite democracies around the world to counter autocracies; how we keep the Indo-Pacific an area of freedom and rules; and reducing our strategic and economic dependencies on autocratic states who abuse those dependencies to divide the free world and coerce democracies,” he explained, and added:

“NATO’s new Strategic Concept will need to respond to a rapidly changing world, but adaptation is part of NATO’s DNA and its historical success“.

As a possible indication of the shift, on China, a top political priority for US President Joe Biden, NATO’s roughly 40-page-long summit communiqué due next week, seen by EURACTIV, will have much stronger language than it ever had before.

“There is a growing divergence between Beijing’s coercive policies and our values,” the draft communiqué will likely state.

Diplomatic sources, however, stressed to EURACTIV that NATO cannot appear ‘out of the blue’ in the Indo-Pacific.

At the same time, the EU, as part of a new strategy for the Indo-Pacific region, also committed to a “meaningful” naval presence in the Indian and Pacific Oceans.

Asked about the EU’s strategy, brokered under the Portuguese EU Council Presidency, the country’s defence minister João Gomes Cravinho told EURACTIV that while the EU is looking into some maritime assets, non-military cooperation would be of higher importance.

“For the EU, the most important strategic instruments that we have of relevance for the Indo-Pacific region are not military ones, they are the ones related to our capacity to partner with countries like India, Japan, South Korea, Australia, and others in the region,” he said.

France is currently the only EU member with significant naval forces in the region, but the rest of the bloc is coming under heightened pressure to step up, after President Biden marked China as a leading global security threat.

Germany, for its part, announced plans to sail a warship across the contested South China Sea in August, calling it welcome support for a “rules-based international order” in the region.

What about NATO, then?

Both actions would mean that NATO assets would be directly involved in the region.

“NATO will remain as a regional organisation, but should increasingly look beyond its geographical boundaries to address hybrid threats,” Tacan Ildem, a former NATO ambassador and member of the NATO2030 reflection group, told EURACTIV ahead of the June summit, on the sidelines of a NATO Defense College Foundation event.

However, having a global approach “does not mean that NATO would become world police or become a global organisation,” Ildem added.

“When we talk about China, it is no longer a country in a too distant geographical location, China is present everywhere in Europe,” Ildem said, “Look at all the economic initiatives, some key infrastructure like ports, they are controlled by China, and when you look at the Mediterranean, North Africa and Middle East, China is present more than Russia.”

“Right now, China is not a direct military threat to NATO. Therefore, there is a difference between how we look at Russia, and how we tackle China,” Ildem said, adding that this should be done in close cooperation with the EU and Asia Pacific partners like Australia, New Zealand, South Korea, and Japan.

According to the draft summit communiqué seen by EURACTIV, NATO leaders are set to confirm that they are “enhancing political dialogue and practical cooperation” with those regional partners, “to promote cooperative security and support the international rules-based order”.