NATO to supply Ukraine with equipment against chemical and nuclear weapons 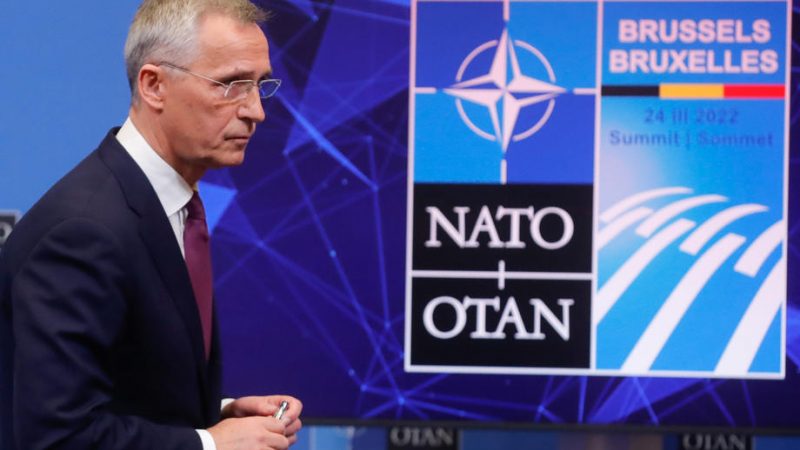 On Thursday (24 March), Conservative leader Erna Solberg said that it is important that Stoltenberg continues as NATO Secretary-General.  [EPA-EFE/STEPHANIE LECOCQ]

NATO leaders will agree on additional support for Ukraine, which will also include protective equipment against a potential use of chemical and nuclear weapons in the country, the alliance chief Jens Stoltenberg said on Wednesday (23 March).

Speaking ahead of Thursday’s summit, Stoltenberg said NATO leaders were expected to agree to provide Ukraine with “additional support”, including equipment to “protect against chemical, biological, radiological and nuclear threats” as well as additional cybersecurity assistance.

It would be the first time the alliance would send such supplies to counter weapons of mass destruction to a partner country.

“We are concerned about the use of chemical or biological weapons,” Stoltenberg said, adding that NATO would call on Russia’s President Vladimir Putin to stop his “nuclear sabre-rattling”.

Washington and its allies have accused Russia of spreading an unproven claim that Ukraine had developed a biological weapons programme as a possible pretext for potentially launching its own biological or chemical attacks.

Over the past weeks, Russia’s defence ministry repeatedly accused Kyiv, without providing evidence, of planning a chemical attack against its own people in order to accuse Moscow of using chemical weapons in its three-week-old conflict with Ukraine.

“Any use of chemical weapons would totally change the nature of the conflict ( . . . ) and have far-reaching consequences,” Stoltenberg told reporters in Brussels.

“NATO will not send the troops into Ukraine. … It is extremely important to provide support to Ukraine, and we are stepping up,” Stoltenberg said.

“But at the same time, it is also extremely important to prevent this conflict from becoming a full-fledged war between NATO and Russia,” he added.

NATO says that up to 40,000 Russian troops have been killed, wounded, taken prisoner or are missing in Ukraine, a senior military official from the alliance told reporters on the condition of anonimity.

Russia began its invasion with roughly 190,000 troops. It has since brought in additional troops from Chechnya, Syria and other locations.

“I don’t know if you can go as far [as to say] stalemate but it’s clear that after 1 month Russia has achieved almost none of their strategic objectives,” the NATO official said.

“They are carpet-bombing Mariupol – to reach this extreme, you need to be cornered and you need to be pushed to break all moral human rules to go to such brutality,” the NATO official added.

Speaking ahead of the NATO summit, the alliance official also addressed fears Russia’s President Vladimir Putin could turn to weapons of mass destruction.

NATO is preparing for two main types of potential chemical weapons attacks by Russia in Ukraine, the NATO official told reporters, a false-flag operation or a chemical attack delivered by military means.

“There is a lot of ammonia (…) and nitrates in Ukraine because this is useful in the agriculture industry”, the NATO official noted. “If you have a massive release of those agents, it is very dangerous.”

NATO leaders are also expected to agree to boost the alliance’s military presence in Eastern Europe with four new battlegroups in Bulgaria, Hungary, Romania, and Slovakia.

“I expect leaders will agree to strengthen NATO’s posture in all domains, with major increases in the eastern part of the alliance on land, in the air and at sea,” he said.

With those and existing forces in the Baltic countries and Poland, NATO would have eight multinational groups along the alliance’s Eastern Flank.

“The decisions we take tomorrow will have far-reaching implications – major reinforcements to our security will require major investments in defence,” Stoltenberg said.

“So I expect our allies will agree to redouble their efforts to invest more. There’s a new sense of urgency because we cannot take peace for granted,” he added.

“For NATO, it is of particular concern that China now, for the first time, has questioned some of the key principles for security, including the right for every nation in Europe to choose its own path,” he told reporters.

Stoltenberg said that when NATO leaders meet he expects them to “call on China to condemn the invasion and engage in diplomatic efforts to find a peaceful way to end the war as soon as possible”.

“I expect NATO to call on China to live up to its responsibilities,” he added.