“There are just five weeks left for Russia to save the treaty,” NATO Secretary General Jens Stoltenberg said on the eve of a NATO defence ministers meeting in Brussels that starts Wednesday (26 June).

The meeting will see the first overseas appearance of US President Donald Trump’s new acting defence secretary, Mark Esper, who took office after Patrick Shanahan’s abrupt resignation last week. It had left American presence at the meeting in doubt.

Esper, a Gulf War veteran and former weapons manufacturer lobbyist, will  be joined by NATO Supreme Allied Commander General Tod Wolters, who made his own first public appearance as NATO chief two weeks ago.

The United States insists Russia’s missile system allows for short-notice nuclear attacks on Europe and breaks the 1987 Intermediate-range Nuclear Forces Treaty (INF), which bans land-based missiles with a range between 500 km and 5,500km.

Washington and its NATO allies want Russia to destroy the 9M729/SSC-8 nuclear-capable cruise missile system. Moscow has so far refused to do so and denies that it is in violation of the treaty’s statutes, accusing Washington of seeking an arms race.

“We call on Russia to take the responsible path, but we have seen no indication that Russia intends to do so,” Stoltenberg told reporters.

Although Europe has no intention to deploy counter-missiles in Europe to “mirror Russia’s behaviour” in the region, defence ministers will discuss their next steps towards Moscow in case of non-compliance.

“We will need to respond to Russia’s pattern of behaviour,” Stoltenberg said, adding the response will be “defensive, measured, and coordinated”, but declined to go into more details when asked what this could mean in practice. 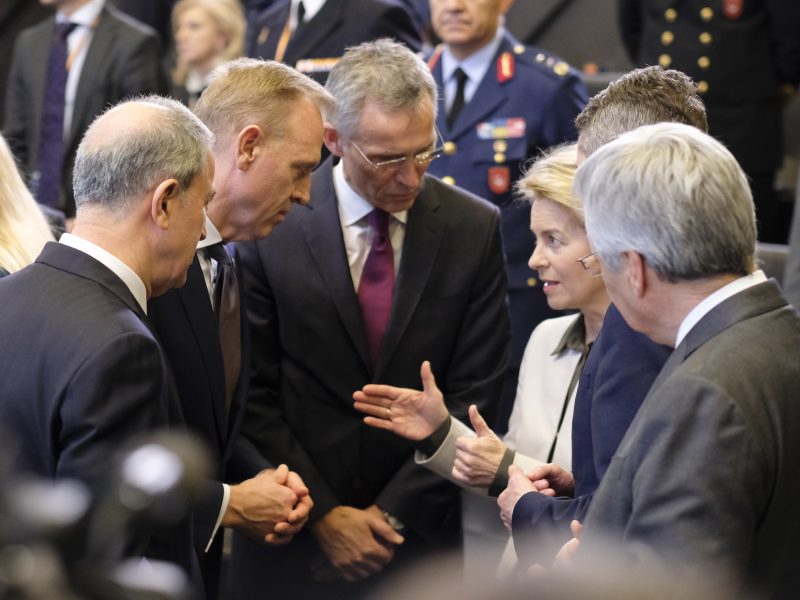 “We do not want a new arms race, but as Russia is deploying new missiles, we must ensure that our deterrence and defence remains credible and effective,” he added.

Diplomats said defence ministers could consider more flights over Europe by US warplanes capable of carrying nuclear warheads, more military training and a repositioning of US sea-based missiles.

Without a deal on the issue, the US warned it will withdraw from the INF treaty on 2 August as planned, with that step removing constraints on its own ability to develop nuclear-capable, medium-range missiles in the future.

“All options are on the table but we are looking at conventional systems, that’s important for our European allies to know,” US Ambassador to NATO Kay Bailey Hutchison said ahead of the Alliance’s gathering

According to her though, Washington for the moment is only considering conventional, non-nuclear weapons, as part of any possible response.

Earlier on Monday, Russia warned of a stand-off comparable to the 1962 Cuban missile crisis if the US were to deploy land-based missile systems near Russia’s borders.

“If things get as far as an actual deployment on the ground of these sorts of systems, then the situation won’t just get more complicated, it will escalate right to the limit,” RIA news agency quoted Russian Deputy Foreign Minister Sergei Ryabkov as saying.

Russian President Vladimir Putin made similar remarks in February after the US made its announcement, when he warned that Moscow would match any US move by stationing its own missiles closer to the US, deploying faster missiles or both.

Stoltenberg also called for a meeting of the NATO-Russia Council next week as a last-ditch bid to dissolve tensions, persuade Moscow to abandon the missiles system and save the treaty.