Poroshenko calls on Zelenskyi to knock on NATO’s door

File photo Petro Poroshenko, the leader of the European Solidarity political party and former Ukrainian president speaks to lawmakers during a session of the Ukrainian Parliament in Kyiv, Ukraine 2 October 2019. [Sergey Dolzhenko/EPA/EFE]

Ukraine’s former pro-Western President Petro Poroshenko challenged his successor on Friday (25 October) to request the country’s accession to NATO’s Membership Action Plan, considered as the ante-chamber to the military alliance.

Poroshenko, who lost to Volodymyr Zelenskyi in the March-April presidential election, addressed the country’s parliament, urging his successor to request accession to the MAP at NATO’s December summit in London.

Ukraine applied to begin a NATO Membership Action Plan (MAP) at the Bucharest summit in 2008, but back then NATO decided not to offer such a status to Ukraine and Georgia, reportedly due to resistance by France and Germany.

Plans for NATO membership were shelved by Ukraine following the 2010 presidential election, in which Viktor Yanukovych, who preferred to keep the country non-aligned, was elected president.

After the February 2014 Euromaidan uprising, the then NATO secretary-general, Anders Fogh Rasmussen, reaffirmed that NATO membership was still an option for Ukraine.

On 29 December 2014 the then President Poroshenko vowed to hold a referendum on joining NATO. In July 2017 Poroshenko announced that he would seek the opening of negotiations on a Membership Action Plan.

At that time, polls were showing that 54% of Ukrainians favour NATO membership. On 7 February 2019, the Ukrainian parliament voted with a majority of 334 out of 385 to change the Ukrainian constitution in order to help the country join NATO and the EU.

Zelenskyi, who was elected president in May 2019, has stated that he supports Ukraine becoming a member of the EU and NATO. However, his intentions ahead of the December summit are not known. 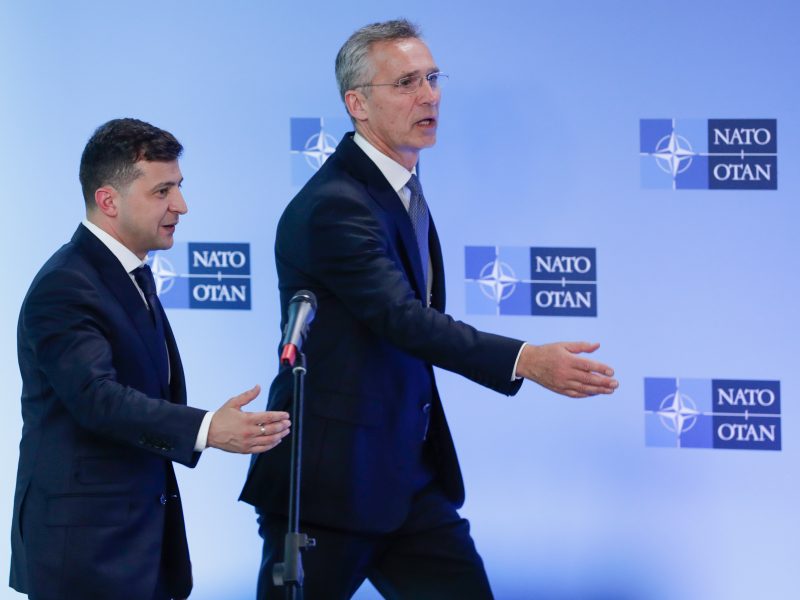 Poroshenko, who is now the leader of European Solidarity, a pro-Western opposition force represented by 27 MPs in the 450-seat parliament, the Verhovna Rada, told parliamentarians that “lasting peace and stable security are only possible when Ukraine is a member of NATO”.

“Time has come to grant Ukraine with a Membership Action Plan”, he pleaded, alluding that the country’s new leader Zelenskyi was hesitant on the issue.

“Let us stop switching from one foot to the other”, Poroshenko said and added: “To put the issue of the Membership Action Plan on the agenda is above all a responsibility of the president”.

He said that his political force had prepared a draft statement on the issue for the Verkhovna Rada.

“We suggest to invite the chairman of the parliament together with the president and the prime minister to put their signatures under a special letter addressed to the NATO Summit in December”, he said.

He insisted that Ukrainian institutions should be unanimous to achieve “ambitious goals”, as had previously been the case with the EU-Ukraine Association Agreement and the visa-free regime.