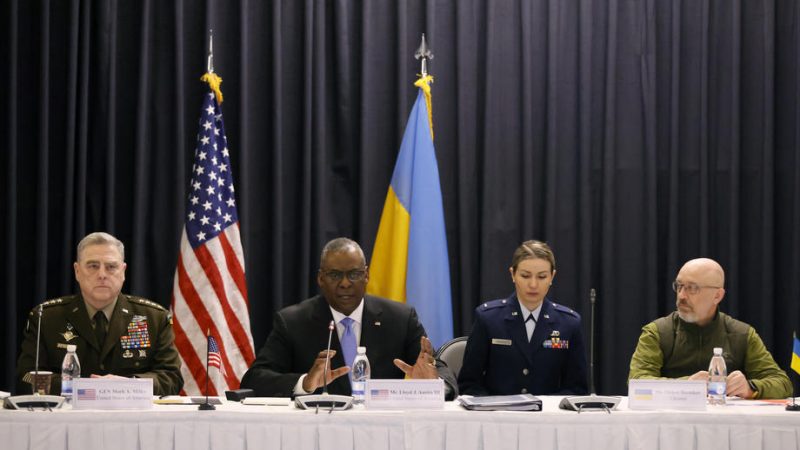 US Secretary of Defense Lloyd J. Austin III (2-L) speaks in the presence of Ukrainian Defense Minister Oleksii Reznikov (R) and US Chairman of the Joint Chiefs of Staff, general Mark Milley (L) during a meeting of Ministers of Defense at the US Air Base in Ramstein, Germany, 26 April 2022. [EPA-EFE/RONALD WITTEK]

Washington on Tuesday (26 April) said it would hold talks on a roughly monthly basis in Germany with allies inside and outside NATO to coordinate bolstering Ukraine’s defence capabilities as it battles Russia’s invasion.

The talks, hosted at Germany’s Ramstein Air Base, were aimed to assess the current Russian offensive in eastern Ukraine and how to ensure a continuous flow of security assistance for Ukraine, including how to secure Ukraine’s long-term security and how it will defend itself after the war.

Organizers said over 40 countries were attending and a scan of the meeting room showed countries mainly from Europe but also beyond, including Israel, Australia, Kenya and Tunisia, with representatives from South Korea and Japan attending virtually. All EU and NATO members were among the participants.

The meeting marks a turning point in the consultation between Western allies which has taken the turn into an indirect military coalition.

Ukraine also reportedly gave information about its defence needs, calling for everything from artillery, drones and tanks to anti-ship missiles and combat aircraft.

Speaking after the meeting, Austin told reporters that the forum would continue as a monthly “contact group” that would discuss Ukraine’s defence needs, which was rated as a sign that Kyiv is expected to face a lengthy military engagement with Russia.

“We do want to make it harder for Russia to threaten its neighbours and make it less able to do that,” US Defense Secretary Lloyd Austin said.

The talks secured pledges from allies to sustain aid to Ukraine’s military throughout this next phase of the war and for the long term, including from Germany, who for the first time, announced the delivery of heavy weapons to Ukraine.

Germany has also reached out to Eastern Europeans with the pledge to ensure that military stock gaps of Eastern European countries, who supply their Soviet equipment to Ukraine, will be replaced with NATO-standard equipment.