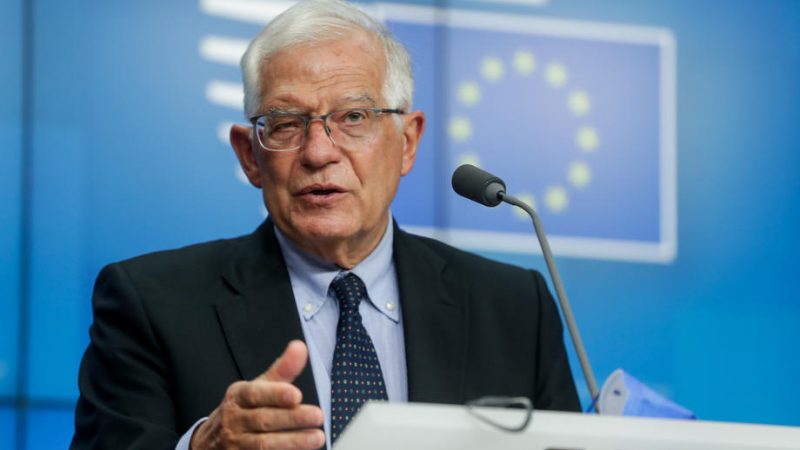 The EU will have to engage in talks with the Taliban to provide support to the Afghan people even if it does not recognise them as legitimate rulers of the country, EU’s chief diplomat Josep Borrell said on Tuesday (17 August).

“The Taliban have won the war, so we will have to talk with them,” Borrell told reporters after a crisis meeting of EU foreign ministers, although stressing this would not mean moving quickly to officially recognise their rule.

He said that there is agreement that the EU side would “engage in a dialogue, as soon as necessary, to prevent a humanitarian and potential migratory disaster.”

“This dialogue will also have to focus on the means to prevent the return of a foreign terrorist presence in Afghanistan,” he added.

Until a few days ago the EU foreign affairs chief was encouraging the government in Kabul to work with the Taliban, but as anybody else he must have been surprised how fast the authorities surrendered to the Islamist movement which now rules the country. Borrell had warned that the Taliban would face non-recognition, isolation, lack of international support and the prospect of continued conflict and instability in Afghanistan if they take power by force and re-establish an Islamic Emirate. However, the Taliban took over without meeting resistance. The Afghan government should engage with the Taliban to reach an inclusive settlement, EU foreign policy chief Josep Borrell said on Thursday (12 August) as the militant group made rapid gains amid spiralling violence and worries of a refugee crisis.

US President Joe Biden had said in televised remarks earlier on Monday he stood “squarely behind” his decision to withdraw US troops from Afghanistan, stressing that America’s mission in Afghanistan was never about nation-building, and its only national interest there was to prevent a terrorist attack on the homeland.

In what could be rated as a reply to those comments, Borrell on Tuesday said that while the fight against Al-Qaeda in Afghanistan succeeded, the process of state-building failed despite the enormous amount of resources directed to the country.

In the meantime, the Taliban, who were driven from power two decades ago by a US-led coalition only to make a stunning comeback, have promised to pardon Afghans they consider foes for having worked with the West.

Striking a doveish tone in his first news conference on Tuesday, Taliban spokesman Zabihullah Mujahid, surprisingly announced they would allow Afghan women to work and study “within the limits of Islamic law” and assured media workers would be able to conduct their jobs freely as long as they would “not work against national values.”

The Taliban said they wanted peaceful relations with other countries and would respect the rights of women within the framework of Islamic law, as they held their first official news briefing since their lightning seizure of Kabul.

EU leaders and the international community, however, have remained sceptical and over the past days voiced concern that the Taliban’s brutal reputation and imposition of Islamist rule could hurt women’s rights and trigger a new wave of migration towards Europe.

Asked about whether the so-far moderate tone of the Taliban would indicate a change in strategy, Borrell quipped that to him “they look the same, but speak better English”.

To avoid a humanitarian disaster, Borrell said aid must be maintained and even increased, but assistance will only go to the Afghan government if conditions are met.

“But we will put conditions for continual support, and we are going to use our leverage … to make the human rights to be respected. I know that when I’m saying that it looks a little wishful thinking, but we will use all our leverage,” he added.

The conditions were also set out in a joint statement by the EU27, published at the end of the two-hour crisis meeting.

“Cooperation with any future Afghan government will be conditioned on a peaceful and inclusive settlement and respect for the fundamental rights of all Afghans, including women, youth and persons belonging to minorities, as well as respect for Afghanistan’s international obligations, commitment to the fight against corruption and preventing the use of Afghanistan’s territory by terrorist organisations,” the statement read.

As EU member states are currently facilitating evacuation missions, Borrell also said he will send a “reinforcement” for the EU’s delegation in Kabul in order “to pursue a dialogue with the Taliban for practical matters.”

This would include as a priority the need to evacuate EU staff and about 400 Afghans and their families who worked for the bloc.

“We are clearly saying that we will not and cannot be the gateway for Europe for the refugees and migrants who could try to come to the EU,” Mitarachi told state television ERT.

Greece was on the front line of Europe’s 2015 migration crisis when nearly a million people fleeing conflict in Syria, Iraq and Afghanistan landed on its islands before travelling north to wealthier European countries.

Rumen Radev, the President of Bulgaria, another EU front-line country when it comes to illegal migration, called on Tuesday the Consultative Council for State Security to discuss the challenge posed by the situation in Afghanistan.

At the same time, some EU diplomats have expressed concern that the Afghanistan issue will be mixed with Wednesday’s crisis talks of EU home affairs ministers on Wednesday.

The meeting is slated to deal with Belarus’ use of illegal migrants, largely Iraqis, as a political weapon in retaliation for EU sanctions imposed on Minsk.

According to a draft statement, EU home affairs ministers are set to announce that the EU stands ready to provide additional border officers and money to tackle a migrant surge on Lithuania’s border blamed on Belarus.

They will also condemn Belarus for committing unacceptable aggression by sending migrants to Lithuania’s border.

Asked about whether it will be possible to keep the Afghanistan debate separate from Wednesday’s Belarus/migration debate, an EU diplomat told EURACTIV that the goal is to “keep the agenda as is”.

However, there the Slovenian EU presidency will likely give the floor to Borrell to present the EU foreign minister’s conclusions on Afghanistan and prepare a follow-up meeting.

The chair of the European Parliament’s foreign affairs committee (AFET), MEP David McAllister (EPP, Germany), has called for an extraordinary meeting of the body on Thursday together with the development and the parliamentary delegation for Afghanistan.