Russia has ‘no right’ to establish a sphere of influence, NATO chief says 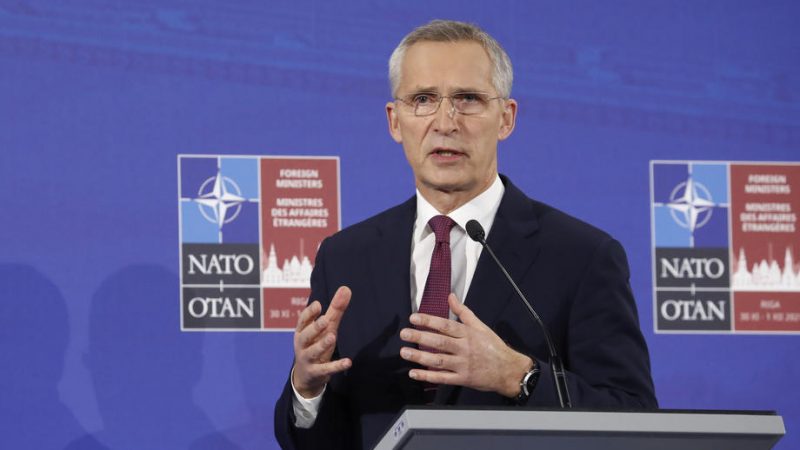 NATO Secretary General Jens Stoltenberg speaks during a press conference after a meeting of the North Atlantic Council (NAC) at the level of Foreign Affairs Ministers in Riga, Latvia, 01 December 2021. [EPA-EFE/TOMS KALNINS]

Tensions over Ukraine escalated on Wednesday (1 December) after Russia’ demanded ‘guarantees’ from NATO that the military alliance would not expand to Europe’s East.

In a joint session with their Georgian and Ukrainian counterparts, NATO foreign ministers meeting in Riga, Latvia, meant to reassure both countries of their commitments to them joining the alliance in due time.

“Ukraine and Georgia are important NATO partners aspiring to membership, we continue to support their sovereignty,” NATO Secretary-General Jens Stoltenberg told reporters after the meeting.

This came after NATO had indicated it would not defend Ukraine with military means if it was attacked by Russia since the alliance’s mutual defence clause, Article 5, only applies to its members.

NATO has not agreed to grant Ukraine membership, but views Ukraine as a partner and has provided training and other forms of military support.

The assurances also followed Russian President Vladimir Putin’s warning towards NATO not to deploy its troops and weapons around Ukraine, saying it would represent a ‘red line’ for Moscow.

On Wednesday, Putin also stated he would seek Western guarantees that would preclude any further NATO expansion and deployment of its weapons near Russia’s borders.

Moscow would seek “strong, reliable and long-term guarantees of its security,” Putin said in Moscow.

“In a dialogue with the United States and its allies, we will insist on working out specific agreements that would exclude any further NATO moves eastward and the deployment of weapons systems that threaten us in close vicinity to the Russian territory,” he said.

“We aren’t demanding any special conditions for ourselves and realize that any agreements must take interests of Russia and all Euro-Atlantic countries into account,” Putin said.

“A calm and stable situation must be ensured for all and is needed for all without exclusion.”

Asked in Riga about Putin’s statements and Ukraine’s potential future membership, Stoltenberg said Ukraine’s membership in NATO will be decided by its 30 members, provided that this country meets the relevant criteria, including reform of institutions and the fight against corruption.

“Russia has no veto. Russia has no say. And Russia has no right to establish a sphere of influence, trying to control their neighbours,” Stoltenberg told reporters, pounding his podium.

The arguments are not new in essence and do not presume a readiness for NATO to enlarge. Most NATO members see risks rather than advantages in enlarging the alliance in what Moscow sees as its backyard.

“Just the question is reflecting something, which I think we should be very much aware of, that is not acceptable – and that is that Russia has a sphere of influence,” the NATO chief retorted.

“They try to re-establish some kind of acceptance that Russia has the right to control what neighbours do, or not do,” Stoltenberg said.

“I think that tells more about Russia than about NATO,” he added.

The argument that Russia has no right to have a sphere of influence is likely to infuriate Moscow. Senior US pundits have argued in the recent past that “Russia needs its buffers”.

“This idea that NATO’s support to a sovereign nation is the provocation, is just wrong. It’s to respect the sovereignty and the will of the Ukrainian people,” he said, adding that Ukraine is an independent state, its borders must be safe and its neighbours must not violate them.

“We do not want to go back to the world in which states were limited by spheres of influence of superpowers”, he emphasised, answering the question about Russia’s reaction to the possible accession of Ukraine.

In Riga, Ukraine urged NATO to prepare economic sanctions on Russia to deter a possible invasion if needed, with its foreign minister Dmytro Kuleba saying he made the request to his NATO counterparts.

“We will call on the allies to join Ukraine in putting together a deterrence package,” Kuleba told reporters as he arrived for the talks in Riga.

This should include preparing economic sanctions against Russia, in case it “decides to choose the worst-case scenario”, Kuleba said, adding that NATO should also boost military and defence cooperation with Ukraine.

“We are confident that if we join efforts if we act in a coordinated fashion, we will be able to deter President Putin and to demotivate him from choosing the worst-case scenario, which is a military operation,” Kuleba said.

For his part, Stoltenberg repeated his warning on Wednesday that any future Russian aggression against Ukraine would come at a ‘high price’ and have serious political and economic consequences for Moscow.

The 30 NATO allies together represent more than 50% of the global economy.

“We have a wide range of options to make sure that Russia will be confronted with serious consequences if they once again use force against an independent sovereign nation, Ukraine,” Stoltenberg told reporters in Riga.

“Everything from economic sanctions, financial sanctions, political restrictions, but also, as we saw after 2014 when they illegally annexed Crimea … that actually triggered the biggest reinforcement of our collective defence since the end of the Cold War,” Stoltenberg said.

“We don’t know whether President Putin has made the decision to invade” Ukraine, US Secretary of State Anthony Blinken said, but added that “if Russia invades Ukraine… we will be prepared to act” with high-level economic sanctions and other measures.

It’s important that Russia understands this, Blinken stressed, adding that the US will make sure Ukraine has the means to defend itself.

“We’ve seen this playbook before in 2014 when Russia last invaded Ukraine, then as now they significantly increased combat forces near the border,” Blinken said.

“Then as now, they intensified disinformation that Ukraine is the aggressor to justified pre-planned military action,” he added.

Blinken will meet with Russian Foreign Minister Sergey Lavrov in Stockholm on Thursday.

EU’s chief diplomat Josep Borrell, who joined a common session in Riga, told reporters that “for the EU, the territorial integrity and sovereignty of Ukraine is above anything”.

“We will be standing firmly and decisively with Ukraine in front of any attempt to undermine its territorial integrity and sovereignty,” he added.

Hungary has been blocking Ukraine’s rapprochement with NATO and holding Ukraine-NATO Commission talks as the two countries at loggerheads over the right of some 150,000 ethnic Hungarians living in Transcarpathia in western Ukraine to use their native tongue, especially in education.

Some NATO diplomats have expressed irritation with Budapest’s mixed messages sent in the course of the ministerial meeting.

This particularly included a comment by Hungary’s Foreign Minister Peter Szijjarto, who said NATO should focus on challenges coming from the South such as migratory pressure that can be attributed to security risks such as terrorist acts.

2 responses to “Russia has ‘no right’ to establish a sphere of influence, NATO chief says”