Russia launches the largest military manoeuvres in its history on Wednesday (12 September), with the participation of nearly 300,000 military from all kinds of armed forces plus Chinese soldiers, disregarding NATO’s criticism that it is a rehearsal for a “large-scale conflict.”

The so-called ‘East 2018’ manoeuvres from 11 to 17 September in Eastern Siberia and the Russian Far East take place in the context of continuing tensions with the West in connection with the Ukrainian crisis, the Syrian conflict and the countless accusations of Russian interfering with Western politics, writes Dnevnik, EURACTIV’s partner in Bulgaria.

The Russian army compared the upcoming manoeuvres to ‘Zapad 81’ (West 81), in which an estimated 100,000 to 150,000 soldiers from the Warsaw Pact were mobilised in Eastern Europe nearly 40 years ago. Those were the largest military manoeuvres ever organised during the Soviet era.

“They [the current maneuvers] will look a bit like ‘Zapad 81’, but will be more impressive,” Russian Defence Secretary Sergei Shoigu said at the end of August. He described as follows the personnel and equipment involved: 300,000 soldiers, 36,000 tanks and armoured vehicles, 1,000 planes and 80 ships.

“Imagine 36,000 war machines moving at the same time: tanks, armoured vehicles and infantry carriers, and all of this, of course, in conditions as close as possible to the battle”, Shoigu said with enthusiasm.

ZVEZDA: Shoigu congratulated servicemen and veterans on the Day of the tankman https://t.co/WHFtNL13xt pic.twitter.com/yXlCBWKFCJ

Reportedly, all modern weapons of the Russian army will be tested during the manoeuvers: the Iskander missile capable of carrying nuclear warheads, T-80 and T-90 tanks, and the latest Su-34 and Su-35 jet fighters.

In the seas, the Russian Navy will deploy several frigates armed with Kalibr missiles that were already tested in Syria.

In previous Russian military manoeuvres, ‘East 2014’, some 155,000 soldiers too part, while in the ‘West 2017’ war games, which took place close to the EU borders, only 12,700 personnel took part, according to Moscow, although Ukraine and the Baltic countries say their number was much bigger.

Russian President Vladimir Putin, who will take part in the Eastern Economic Forum in Vladivostok (11-13 September), where the Chinese president is also expected, will also attend the ‘East 2018’ manoeuvres.

“It is about preparing for a future world war, the Russian General Staff thinks it will take place after 2020 and will be either a global war or a series of regional conflicts, and the enemy is the United States and its allies”, Russian military expert Pavel Felgenhauer was quoted as saying by AFP.

According to him, China’s participation in the war games, though with only 3,200 personnel, is a key factor. “It is not just a sign, a message, but a preparation for a real, large-scale war,” he stressed.

NATO shares Felgenhauer’s opinion. The alliance has said the ‘East 2018’ maneuvers demonstrate that Russia is focusing on preparations for a large-scale conflict.

“This is in line with the trend we have seen for some time: a more assertive Russia that increases its budget for defense and military presence,” NATO spokesman Dylan White was quoted as saying.

As expected, those concerns were toned down by Russia. Foreign ministry spokesperson Maria Zaharova said the East 2018 maneuvers would take place far from NATO’s area of responsibility and would not affect the security of the member states in any way.

Maneuvers in all directions

Since 2014, and the serious deterioration of relations between Moscow and the West, Russia has increased the number of its large-scale military exercises from the Caucasus through the Baltic to the Arctic in a sign of its opposition to NATO enlargement close to its borders. Russia’s new military doctrine adopted the same year defines NATO enlargement as a major threat to the country’s security.

Russian manoeuvers in the Far East were preceded by drills in the Mediterranean Sea from 1 to 8 September, involving more than 25 ships and some thirty aircraft, in the context of the strengthening of the Russian presence near Syria where Russia is conducting a military intervention since 2015.

‘East 2018’ will be held after military drills in western Ukraine, started in the beginning of the month, involving 2,200 soldiers from Ukraine, the United States, and NATO members.

The Kremlin spokesman warned at the end of August: “Russia’s defense capability in the current international situation, which is often quite aggressive and unfriendly to our country, is absolutely and unquestionably justified”. 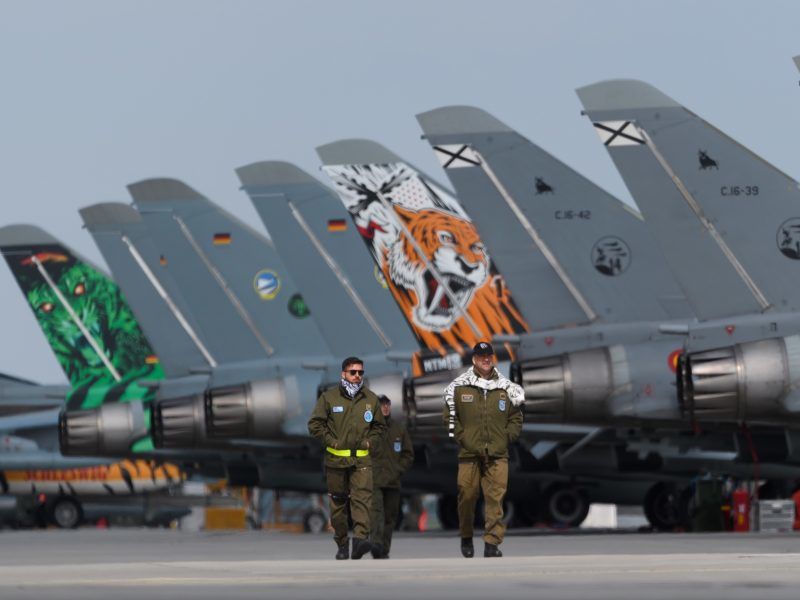