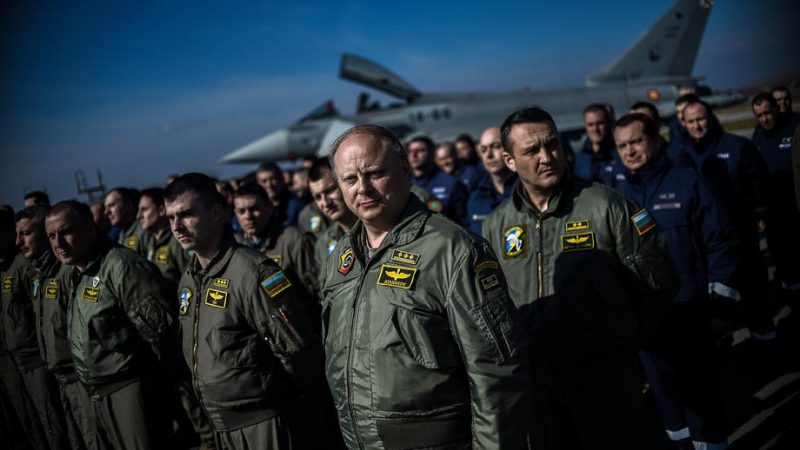 Pilots and air base personnel are seen next to a Eurofighter Typhoon jet during the first day of the joint tasks on enhanced airspace protection (Air Policing) by the Bulgarian and Spanish Air Forces in 'Graf Ignatievo' Aviation Base in Plovdiv, Bulgaria, 17 February 2022. Bulgarian and Spanish fighters will perform together tasks until March 31, 2022. The mission is implementing measures to ensure the security of NATO member countries on the eastern flank and will be implemented under the plans and procedures of the Integrated System of the Alliance for Air Defense and missile defense. [(NATINAMDS). EPA-EFE/BORISLAV TROSHEV]

Responding to a possible violation of Bulgarian airspace in the Black Sea, two Eurofighter EF-2000 Typhoon jets took off from Graf Ignatievo Air Base on Thursday (17 February) on the same day as the ceremony to mark their arrival.

The news was announced by the Chief of Defense Admiral Emil Eftimov and the Spanish Commander Jesus Salazar, quoted by Nova TV, following the certification ceremony of their Bulgarian and Spanish crews, jointly tasked with patroling Bulgaria’s skies.

Reportedly, on the morning of Thursday, foreign planes flying in the eastern zone over the Black Sea were spotted. However, the Spanish pilots could not identify them as they withdrew quickly. Authorities confirmed that Bulgarian air space was not violated.

“Similar actions are performed weekly by the Bulgarian MiG-29 when approaching foreign aircraft to a regulated perimeter near the Bulgarian airspace. We categorically state that there are no grounds for concern because the Bulgarian air borders have not been violated in any way,” the Bulgarian defence ministry stated.

Four Spanish Eurofighters and personnel of 130 people arrived in Bulgaria on 11 February.

Bulgaria’s combat air fleet consists of a dozen of Soviet-made MIG-29 and another dozen of Sukhoi SU-25. Bulgaria has ordered 16 US F-16 fighter jets, but the delivery will take several years.

The three Eurofighters and roughly 60 soldiers will join Italian and Romanian forces for enhanced air policing missions over the next three weeks. German air forces ran similar missions alongside British air forces in Romania in 2021.

They will be stationed at the Mihail Kogalniceanu airbase on the Black Sea, where a Stryker squadron of 1,000 US service members was relocated from Vilseck, Germany, earlier this month. The squadron added to the 900 soldiers Washington currently has rotating in Romania, which borders Ukraine to the north.

Earlier this week, NATO told its military commanders to draw up plans for new battlegroups in central and southeastern Europe. It accused Russia of sending more troops to areas near Ukraine instead of withdrawing its forces.

Diplomats said four new units comprising a total of around 4,000 troops could be based in Romania, Bulgaria, Hungary and Slovakia in what would be the most significant shift in NATO’s military posture since it moved troops to the Baltics and Poland following Russia’s annexation of Crimea from Ukraine in 2014.

A German army convoy of 130 soldiers and 60 vehicles reached the Baltic state of Lithuania on Thursday, bringing almost half of the planned reinforcements for the country’s German-led NATO battlegroup.

On Thursday, US President Joe Biden said there was now every indication Russia was planning to invade Ukraine.