Stoltenberg spoke on the eve of a meeting of the alliance’s defence ministers in Brussels, two days after a ‘consultative’ referendum on the name deal in Macedonia went overwhelmingly in favour of the deal, but on a very low turnout.

Talks on Macedonia’s accession to NATO are ongoing and might be completed in 2019, said Stoltenberg.

“I welcome the ‘yes’ vote in Macedonia’s name referendum,” he said. He noted that there was “a clear majority in favour of the name agreement, in favour of joining the EU and NATO,” but turnout was “not as high as many had hoped.”

On Sunday (30 September), the Western Balkan country held a referendum on changing the name of Macedonia, which Greece refuses to accept, to “The Republic of Northern Macedonia”. Because of the name dispute, Macedonia’s official name is ‘the Former Yugoslav Republic of Macedonia’.

While 91.46% of voters supported renaming the country under the deal with Greece, only a third of the electorate showed up to vote, fell short of the necessary 50% turnout in order to make the vote valid. The country’s parliament is set to vote on the deal in the coming weeks.

Stoltenberg emphasised that for the Western Balkan country there is no other way to join the Alliance than to accept the agreement, reached by Prime Minister Zoran Zaev and his Greek counterpart Alexis Tsipras.

“NATO is ready to welcome our 30th member but only if the name agreement with Greece is implemented. There is no other way. I urge all to work together constructively to seize this opportunity.”

“It is up to Skopje to decide on the next steps,” Stoltenberg said. The name change represented a “historic opportunity” and “NATO’s door is open.”

According to a recent poll by the International Republican Institute’s (IRI) Center for Insights in Survey Research Macedonian support for NATO membership has continued to rise since March 2017 and is currently at 77%.

The Alliance invited the Western Balkan country to start accession procedures on July 12, only weeks after the initial agreement was signed.

Russia, wary of NATO’s Eastern Enlargement, condemned the process: “The sucking into NATO by force of Macedonia only confirms that the policy of ‘open doors’ has become an aim in itself and a tool to gain control of geopolitical territory,” the Russian Foreign Ministry said in a July statement and repeated its claims after the Sunday’s referendum. 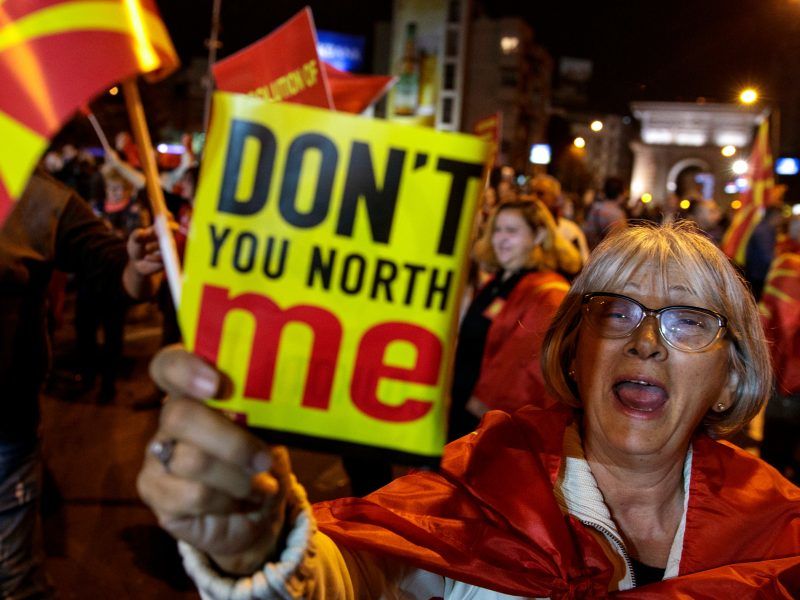 Moscow on Monday (1 October) said low turnout in the referendum on Macedonia’s name change renders it invalid, adding that lack of interest means that the population has boycotted a decision “forced” upon it.

If the name deal is going to be ratified, Macedonia could join NATO in the coming year. Such a step, however, would require ratification in all NATO member parliaments, including Greece.

Luxembourg MFA, Jean Asselborn, tells me that if the Prespa Agreement doesn't go through, the doors to EU & NATO will remain closed for Macedonia, possibly for a decade https://t.co/BMleJZL0c1