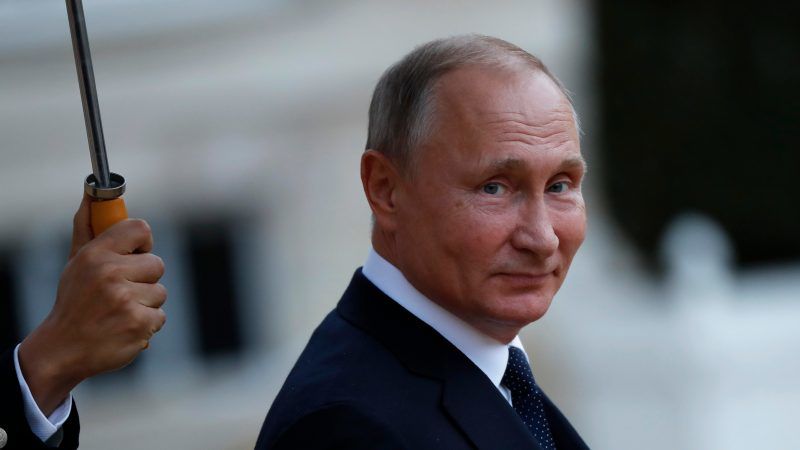 Russian president Vladimir Putin leaves the Elysee palace after the official lunch after the international ceremony for the Centenary of the WWI Armistice of 11 November 1918, in Paris, France, 11 November 2018. [Christophe Petit Tesson/EPA/EFE]

Trump had tweeted on Friday (9 November) that Macron’s call for a “real European army” was “insulting”.

President Macron of France has just suggested that Europe build its own military in order to protect itself from the U.S., China and Russia. Very insulting, but perhaps Europe should first pay its fair share of NATO, which the U.S. subsidizes greatly!

The US leader’s criticism came after Macron spoke about the need for a European army and listed the US along with Russia and China as a threat to European security.

Without referring specifically to Macron’s call for a European army, Stoltenberg said he welcomed stronger EU efforts on defence that could strengthen NATO.

But he warned European members against duplicating the alliance’s work and jeopardising relations with the United States.

“More European efforts on defence is great but it should never undermine the strength of the transatlantic bond,” said Stoltenberg at a forum in Berlin on Monday.

“If we speak too much about a phrase like, for instance strategic autonomy… it sounds like you’re going to do these big strategic things alone and I don’t think that’s wise.

“Two World Wars and a Cold War taught us the importance of doing things together,” he said.

If they so wish, European allies can choose to carry out operations with or without the US within the framework of NATO, said Stoltenberg.

But he would oppose the EU developing structures that duplicated the alliance’s work.

“The reality is that we need one strong and capable command structure, we can’t divide those resources in two,” said the NATO chief.

Trump has repeatedly berated European NATO members like Germany for failing to meet spending targets set by the alliance.

But in an interview aired on Sunday, Macron said Europe should not raise their defence budgets in order to purchase US-made weapons.

Macron’s concept of a European army would be “positive” for the multipolar world, Vladimir Putin argued on Sunday.

The president of France has now supporters both inside the EU (Viktor Orban) and outside of it. Sad, but true: “Natural that Europe should want an army, says Russia's Putin” https://t.co/avKmBbIduh