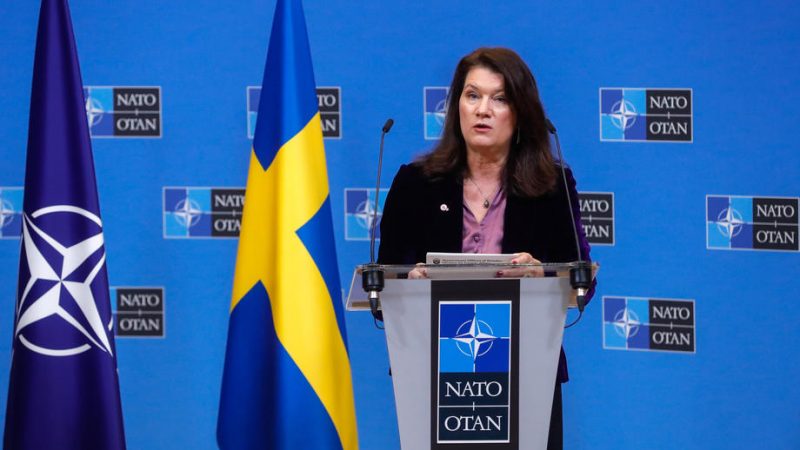 File photo. Swedish Foreign Minister Ann Linde during a joint press conference at the end of a meeting at the NATO headquarters in Brussels, Belgium, 24 January 2022. [EPA-EFE/STEPHANIE LECOCQ]

A majority of Swedes are in favour of joining NATO, a poll showed on Friday (4 March), with Russia’s invasion of Ukraine spurring a rapid shift in attitudes in a country long known for neutrality.

Sweden has not been in a war since 1814 and has built its foreign policy on “non-participation in military alliances.” It remained neutral throughout World War Two even as neighbouring Nordic countries were invaded, and during the Cold War.

A poll by Demoskop and commissioned by Aftonbladet newspaper showed 51% of Swedes are now in favour of NATO, up from 42% in January. People against joining fell to 27% from 37%. It’s the first time such a poll has shown a majority in favour.

A new poll shows 51% in 🇸🇪 wants the country to join @nato as opposed to 27% against. It’s a dramatic change in public opinion. pic.twitter.com/Ve3TBUViF5

However, Sweden’s Defence Minister Peter Hultqvist said joining NATO was not an easy decision, nor one that could be rushed based on recent events alone.

“To change the defence doctrine, that is a very huge decision, so you don’t do it overnight and you cannot do it because of opinion polls,” he told a news conference in Copenhagen where he met his Danish and British counterparts.

The shift in opinion echoes that in close ally and NATO non-member Finland, where the head of the Finnish Institute of International Affairs described Russia’s attack on Ukraine as a wake-up call and “Europe’s 9/11 for Finns.”

Moscow says it is conducting a “special operation” to disarm its neighbour and capture leaders it calls neo-Nazis.

Sweden and Finland already have very close cooperation with NATO and have been invited to recent summits. NATO Secretary General Jens Stoltenberg said in January the two countries could join the alliance “very quickly” if they decided to apply for membership.

“Sweden is incredibly close to the United Kingdom, it is incomprehensible that Britain would not come and support Sweden in nearly any scenario whatsoever,” British Defence Secretary Ben Wallace said.

“Sweden is part of the same family so we would stand by Sweden, we would do anything we could to support both militarily and in other ways,” he said.

Russia has warned Sweden and Finland against joining NATO. Sweden took the decision this month to send weapons to Ukraine, the first time since 1939 Sweden sent weapons to a country at war.