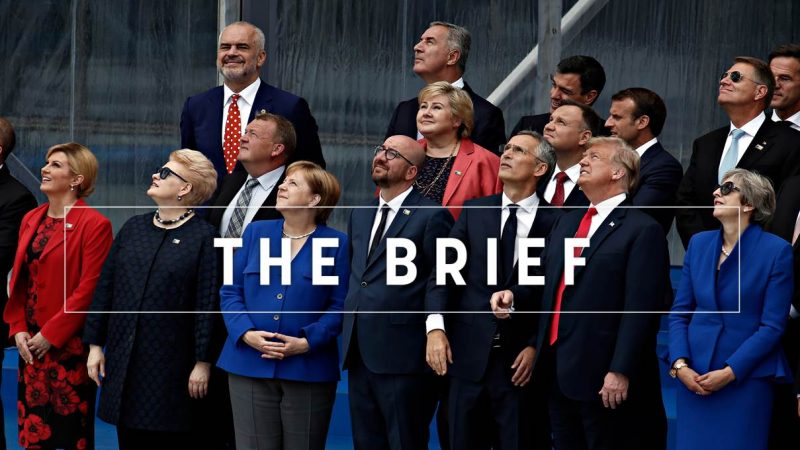 On 4 April 1949, after weeks of negotiations, twelve state leaders placed their signature on a document that laid the foundation of what some call “the most successful alliance” so far.

The Treaty of Washington was created with an armed attack by the Soviet Union on Western Europe in mind.

During the dark days of the Cold War, Americans laid their head on the block for European allies and offered protection with their nuclear weapons from the adversary in the East. Post-Cold War, NATO’s bombing of Yugoslavia in 1999 was dubbed the alliance’s perfect -and only – failure.

The mutual self-defence clause was never activated during the Cold War. It was invoked for the first and only time by the US, only hours after the attacks on 9/11, and the Europeans and Canadians took heed. Allies followed Washington’s call to war in Afghanistan, paying a high price.

Back in the present day, as tensions with Russia have returned to Cold War levels, NATO has rediscovered its purpose.

It could be this legacy we should remember this week as diplomats from the 29 NATO members gather in Washington, the place where it all started, to celebrate the Alliance’s 70th birthday.

But it will not necessarily be a happy one.

“The strength of NATO is that despite these differences, we have always been able to unite around our core tasks. That is, to protect and defend each other,” NATO chief Jens Stoltenberg said in Brussels before taking the plane to the other side of the Atlantic.

The anniversary was meant as an opportunity to glue together the cracks Trump and the lack of US leadership have revealed. But the gathering, downgraded from presidents to foreign ministers, could instead become an exercise in containment and damage control.

Trump has made a memorable impression on leaders during last year’s NATO summit, acting like a bull in a China shop and scolding allies for shortfalls in defence spending. The master of the White House has become number one black sheep, seen by allies as NATO’s “most urgent, and often most difficult, problem.”

The US Congress, which sent one of its biggest delegations on a reassurance mission to Europe earlier this year, and NATO chief Stoltenberg will try to do their best as mediators. But all of them will be nervously waiting for a tweet from inside the White House that could disturb relations further.

Beside Trump, however, NATO seems to have a lot of other black sheep in its ranks. A recent example is Germany, one of the strongest economies, announcing it will not even come close to the 2% GDP defence spending target. The truth is, however, that defence spending falls short of NATO guidelines in most members.

But the crack goes far further than the mere money question.

The lack of American leadership inside the Alliance has spread uncertainty among European members, who have grown increasingly weary of their security situation. The hope that Trump would finally unite Europeans, has fallen short, too.

With Britain halfway out the EU door, European leaders such as France’s Emmanuel Macron and Germany’s Angela Merkel have started to talk EU strategic autonomy, as far reaching as a prospective EU army.

But Europe is torn between the heavy reliance on the Americans and the strive for emancipation.

And another elephant in the NATO room, just like in the EU, is the issue of “shared values”.

The preamble to the treaty commits members to “safeguard the freedom, common heritage and civilisation of their peoples, founded on the principles of democracy, individual liberty and the rule of law”.

Trump’s attitude of disapproval towards multilateralism which European have learned to hold dear, is mirrored in growing authoritarian or populist tendencies in NATO members like Turkey, Hungary, Italy and Poland.

The real showdown will happen in December, when NATO leaders will gather for the London summit. It will be about returning trust and saving what is left of it.

The EU should prepare for the implications of a no-deal Brexit on the future security partnership with the UK, the bloc’s chief Brexit negotiator, Michel Barnier, told MEPs.

The UK’s disorderly departure from the EU could cause “disruptions” after decades of financial integration and bring volatility to markets and business operations, European Commission Vice-President Valdis Dombrovskis warned.

Meanwhile, hundreds of thousands of people in need of full-time care in 16 member states will be excluded from voting in the European elections in May.

Conflicting messages about the Nagorno-Karabakh conflict have been aired in recent days: “Territories for peace” and a “new war for new territories”. But the European Union made it clear it trusted the messages of peace.

The backlog of money the European Union must pay from its budget reached a new high of €267 billion at the end of 2017, the European Court of Auditors (ECA) warned and urged the Commission to reduce it.

NATO foreign ministers gather in Washington for the ministerial session.