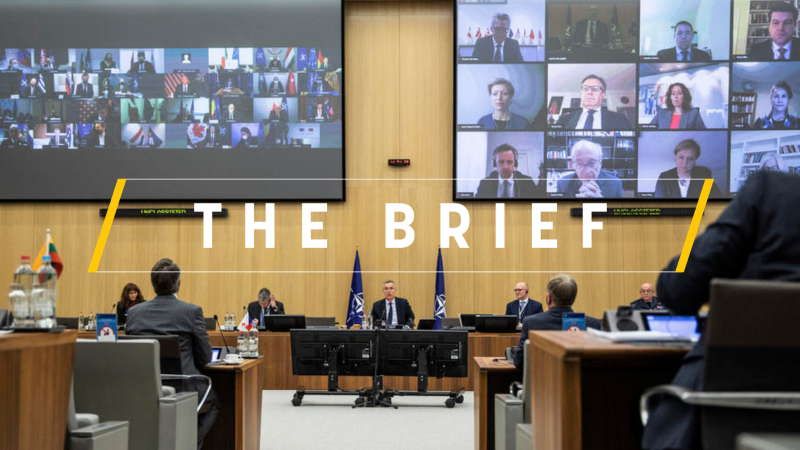 After French President Emmanuel Macron said NATO was suffering “brain death” last year, the report on reforming the alliance proposes solutions on how to stay relevant in the face of new challenges from Russia and China.

Turkey is also an issue. It’s a NATO member with the second-largest army, but it increasingly behaves like a foe or troublemaker.

Most recently, Turkey has blocked Eastern defence plans, has bought Russian air defence, and engaged in a Greek-Turkish extravaganza in the Eastern Mediterranean, which has nearly led to armed conflicts with two NATO allies – Greece, but also France.

In the past, Turkey has blocked exchange of information between the EU and NATO over its conflict with Nicosia.

Meanwhile, Hungary continues to block Ukraine’s cooperation with NATO over a bilateral issue.

In order to improve NATO’s ability to act, the expert group proposed what some see as a series of measures at the expense of unity.

Three particularly stand out: curbing single-country blockages, ‘Coalitions of the Willing’ and more mediation powers for the Sec-Gen.

“The principle of consensus is a cornerstone of the Alliance, but NATO must be diligent in ensuring that it remains capable of reaching and implementing decisions in a timely fashion,” the report states.

It is especially the first that could raise some eyebrows but it might find supporters in the European defence crowd.

According to the expert group, it would involve bypassing single-country vetoes involving bilateral issues, which as mentioned have seen a rise in recent years, to speed up decisions and examine ways to time-limit decision making in crises.

They suggested the alliance should strengthen measures to ensure that consensus-based decisions are implemented and not diluted in follow-on work, by raising the threshold for such vetoes from ambassadors to the ministerial level.

It is, however, by no means a guarantee they will stop.

It goes without saying that the idea will meet with resistance from several members, especially in Ankara, London and Eastern Europe, for different reasons.

“It is more likely that we see abolishing unanimity in EU foreign policy than NATO diverging from the consensus-rule in its decision-making,” an alliance source said.

Another recommendation, ‘Coalitions of the Willing’ within NATO, which would make the alliance able to act even if not all members approve a mission, could prove to be a two-sided sword.

Just imagine. It would be an (of course, rather unlikely) nightmare scenario if on behalf of NATO, Poland and the Baltics launch military support mission in Belarus, but you can get an idea.

In recent times, many believe the possibility for joint military action outside an Article-5 setting should not be conditioned on unanimous consent.

An alliance that provides rapid and effective responses to crises, even if only a few allies are involved, is preferable to one that conditions action on potentially unattainable unanimous support, so the argument goes.

At a time when threat perceptions and possible response ideas increasingly diverge, insisting on consensus for joint action could result in an unacceptable delay or even the failure to act, strategists argue. (Remember Kosovo?)

Some may fear such suggestions might undermine unity, others may worry that certain allies will abstain from any participation and become “free-riders”.

But in reality, the American vision of NATO acting beyond regional boundaries is not widely shared by the European allies.

By now, we are used to the fact that NATO’s role extends to the Western Balkans, and might at some point reach as far as the Caucasus region, if and when Georgia becomes a member, but the Middle East?

Not many are keen to get their fingers burned on this, one hears in the Brussels defence bubble.

However, the requirement for consensus among all NATO members has survived serious internal rifts and several rounds of enlargement.

In the end, of course, there is a Catch-22: the consensus rule can only be only altered by consensus, and the same goes for the final reform paper, which ultimately needs to be approved by all NATO leaders.

The European Commission is assessing options to circumvent Hungary and Poland’s veto to the EU budget and the recovery fund, and could come up with a proposal early next year if their blockade remains, a senior EU official confirmed.

EU lawmakers reached an eleventh-hour deal on the legislation laying out the rule book for the structural funds that make up almost a third of the future EU budget, after two years of negotiations.

After six years of talks, the EU and the ASEAN group of ten Southeast Asian countries upgraded their relations from “dialogue” to “strategic partnership”.

Lawmakers in the European Parliament grilled the director of the European Border and Coast Guard Agency over migrant pushbacks in the Mediterranean, with left-wing political groups calling for his resignation.

The aviation industry aims to cut its environmental footprint and contribute to society’s shift towards decarbonisation. In order to meet the goals of the Paris Agreement, air travel will have to make emission cuts and now the discussion is focusing on how exactly to do that.

The dominance of England’s football clubs on the beautiful game in Europe could become an unlikely victim of post-Brexit immigration policy, with new restrictions to be imposed on the number of overseas players which clubs can sign.