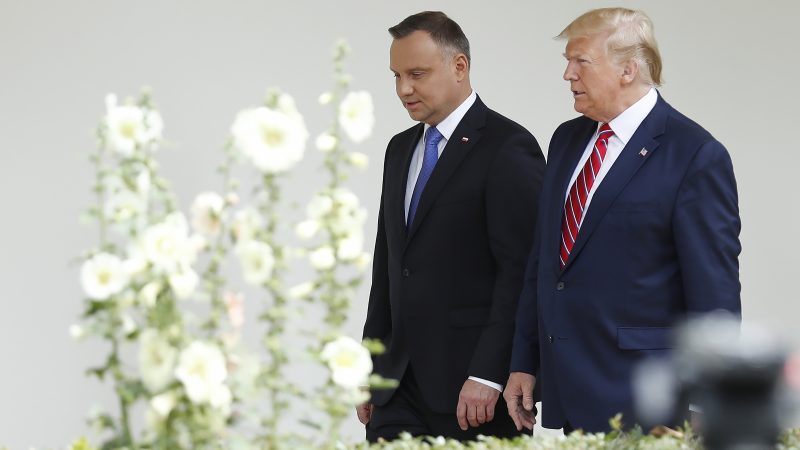 US President Donald Trump announced Wednesday (12 June) he will send 1,000 more troops to Poland to counter Russia, while criticising Germany for making itself a “hostage” to Moscow by over-relying on Russian energy supplies.

Details of the troop boost were thin but they fell far short of Poland’s long-running hope for a permanent major US military base dubbed “Fort Trump”.

About 5,000 US soldiers already deploy along with NATO forces in Poland as part of a rotating pool, rather than a fixed garrison. At a joint press conference with his visiting Polish counterpart Andrzej Duda, Trump said an additional 1,000 troops would be sent.

Trump said the US troops would be moved to Poland from fellow NATO-member Germany and that Poland was building facilities to accommodate them.

The number was half the amount Trump had flagged less than three hours earlier while meeting in the Oval Office with Duda, where he said “they’re talking about 2,000 troops.”

Trump poured cold water on his Polish allies’ hopes for a full-blown permanent US facility — something that would irritate the Kremlin and almost certainly prompt a Russian response.

Duda was diplomatic when asked at the press conference how many US troops he’d like to see, saying “it’s always up to the United States.”

Trump said Poland was ordering more than 30 F-35 combat aircraft. In a highly unusual presidential airshow, one of the advanced warplanes roared over the White House during Duda’s visit, prompting the visiting Polish leader to wave in delight.

NATO Secretary General Jens Stoltenberg welcomed the US announcement, tweeting that the extra troops show “the strong commitment of the US to European security & the strength of the transatlantic bond.”

On a separate issue at the heart of European-Russia tensions, Trump criticized Germany for what he said was over-reliance on Moscow for energy supplies.

“It really makes Germany a hostage to Russia,” he said, suggesting that he was considering sanctions aimed at blocking the huge new Russian-led natural gas pipeline dubbed Nord Stream 2.

Nord Stream 2, leading from Russia to Germany, would double the amount of gas Russia could deliver. It has been criticized by some in the European Union, notably Poland.

“I just will tell you very strongly that I think Germany is making a tremendous mistake by relying so heavily on the pipeline,” Trump said.

Criticism of Germany is nothing new for Trump, who has repeatedly clashed with Chancellor Angela Merkel, including over his demand for Germany to spend more on its defense budget.

“We’re protecting Germany from Russia and Russia is getting billions and billions of dollars of money from Germany,” he said in the Oval Office.

Located far inside what used to be Soviet-dominated eastern Europe, Poland is a member of NATO but has long wanted deeper US commitment.

Spooked by resurgent Russia’s seizing control of territory in Georgia and Ukraine over the last decade, Duda has tried to charm the US president, even touting the idea of Poland building a “Fort Trump” to house thousands of US soldiers.

At the White House, Duda delivered an impassioned summary of what he said was Poland’s history of resistance against Russian imperial domination.

“Russia was always looking out to take our territory,” he said. “We would like Russia to be our friend, but unfortunately, Russia is showing its unkind, unpleasant face. We don’t want to be part of that.”

However, furious reaction from Russia has made Washington wary about radically changing its military footprint in Poland.

Likely responses would include the Kremlin increasing military assets in the Russian territory of Kaliningrad, which borders Poland, and possibly also in Belarus, a close ally of Moscow that has so far resisted hosting a full-scale Russian base on its territory.

In the early 2000s, there were intense talks on deployment of a US anti-missile defense system in Poland, ostensibly to guard against Iranian attacks on Europe but seen by Russia as a direct threat.

With the Kremlin vowing to respond with new nuclear missile deployments, president Barack Obama abandoned the project. In 2018, however, Poland signed a $4.75 billion contract to purchase the US Patriot anti-missile systems – a deal seen as a major boost for attempts to modernise Polish forces.