President Recep Tayyip Erdoğan’s existing plans to buy Russian S-400 missile defences have already alarmed the United States, which says they are not compatible with NATO systems and would compromise the security of F-35 jets Turkey is due to receive.

Washington has offered Ankara both carrot and stick in response, proposing to sell it the Raytheon Co. Patriot systems instead of the S-400s, while at the same time warning of sanctions and a halt in the F-35 fighter jet sales if the Russian deal goes ahead.

Turkey has shown no sign of giving ground and Erdoğan, who held talks with President Vladimir Putin in Moscow this week, was quoted on Wednesday as saying the July date for delivery of the first S-400s could even be brought forward. 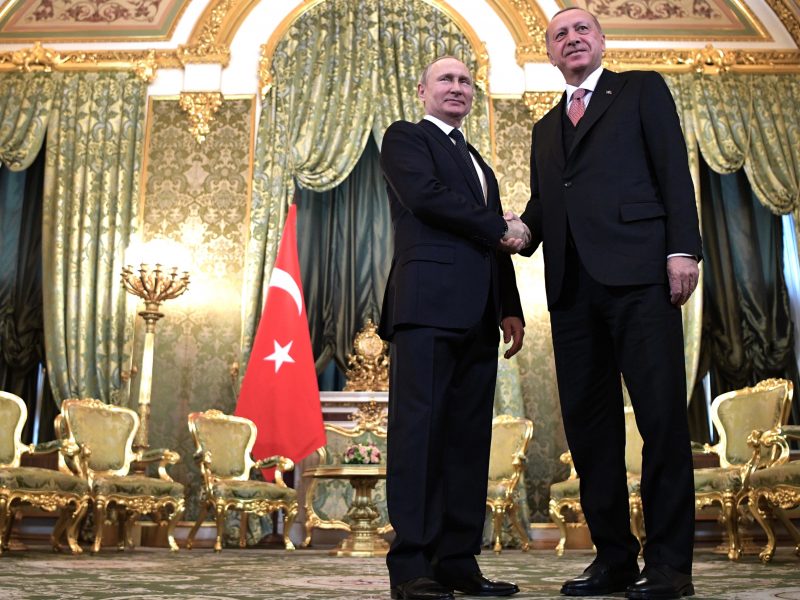 Turkey’s President Recep Tayyip Erdoğan said the delivery of Russian S-400 missile defense systems may be brought forward from July, the Sabah newspaper reported on Wednesday (10 April), sticking to a purchase which has put Turkey at odds with NATO …

Foreign Minister Mevlüt Çavuşoğlu also reiterated Turkey’s stance that the S-400 purchase was a done deal and that it would meet its defence needs from elsewhere if necessary.

“If the F-35s don’t work out, I will again have to procure the jets I need from elsewhere … There are (Russian) SU-34, SU-57 and others. I will absolutely meet my needs from somewhere until I can produce it myself,” he said.

Asked about Çavuşoğlu’s comments, Kremlin spokesman Dmitry Peskov said Russia was looking for opportunities to broaden its military and technical cooperation with Turkey. “This is an absolutely normal process,” he told reporters.

The F-35s stealth fighters are being built by Lockheed Martin Corp, but Turkish manufacturers are also involved in production, further complicating the fallout from any rupture between the two countries.

Çavuşoğlu also said Turkey had not yet received a positive response from Washington over its proposal to form a joint working group which Ankara says would be able to demonstrate that deploying the S-400s would not pose a threat to F-35s.

“The US F-35s fly over Syria every day and there are S-400 systems there. They pose no threats despite being systems that are completely under Russian control, so will they pose a risk when they are in Turkey’s control?” he said.

On Tuesday, leaders of the US Senate Foreign Relations and Armed Services Committees warned Turkey that it risked tough sanctions if it pursued plans to buy the S-400s.

“By the end of the year, Turkey will have either F-35 advanced fighter aircraft on its soil or a Russian S-400 surface-to-air missile defence system. It will not have both,” Republican Senators Jim Risch and Jim Inhofe and Democratic Senators Bob Menendez and Jack Reed said.

The standoff over the S-400s purchase is one of several issues straining ties between the two NATO allies. They have also disagreed on military strategy in northern Syria, Iran sanctions and the detention of local US consular staff.

Speaking to reporters on his return flight from Russia, Erdoğan said he and Çavuşoğlu were constantly being pressured to abandon it the S-400 deal.

“We answer that ‘This deal is done, everything is settled’. The delivery of the S-400 missile defence system was to be in July. Maybe it can be brought forward,” Sabah newspaper quoted Erdoğan as saying.