US, NATO warn Russia over new aggression in Ukraine 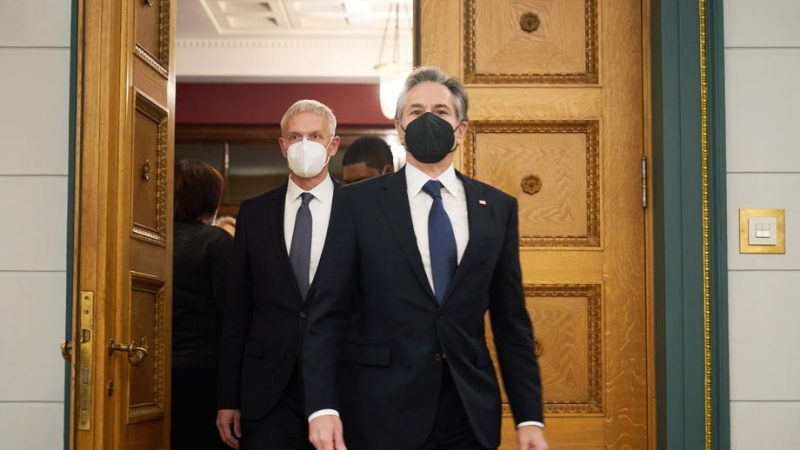 Russia will pay a high price for any new military aggression against Ukraine, NATO and the US warned on Tuesday (30 November) as alliance foreign ministers meet for a two-day meeting in Latvia’s capital Riga to discuss Moscow’s intentions for assembled troops on the border.

Adding to the disquiet, Belarus on Monday (29 November) announced joint military drills with Russia along its own border with Ukraine.

Speaking to reporters ahead of the meeting, US Secretary of State Anthony Blinken called the Russian troop movements ‘unusual’ and added any escalatory actions by Russia would be of “great concern” to Washington.

Earlier, NATO Secretary-General Jens Stoltenberg called Russia’s military build-up near the border with Ukraine “unprovoked and unexplained”, reiterating his calls on Moscow to be transparent and reduce tensions in the region, hinting at sanctions against Moscow.

“There will be a high price to pay for Russia if they once again use force against the independence of the nation, Ukraine,” Stoltenberg said.

Moscow has dismissed Ukraine’s suggestions that it is preparing for an attack as inflammatory, stating said it does not threaten anyone and defends its right to deploy troops on its own territory as it wishes.

As NATO ministers gathered in Riga, Russian President Vladimir Putin on Tuesday, speaking at a forum in Moscow, said the expansion of NATO military infrastructure in Ukraine was a red line he hoped would not be crossed.

“If some kind of strike systems appear on the territory of Ukraine, the flight time to Moscow will be 7-10 minutes, and five minutes in the case of a hypersonic weapon being deployed – just imagine,” Putin said.

“Creating such threats (in Ukraine) poses red lines for us,” he added.

His foreign minister Sergey Lavrov accused NATO of deploying a significant amount of military hardware near Russia’s borders and said Moscow would respond to security threats from Western countries and Ukraine if necessary.

Blinken is expected to brief his counterparts on Washington’s intelligence relating to the unfolding situation.

“Any escalatory actions by Russia would be a great concern to the United States (…), and any renewed aggression would trigger serious consequences,” he told reporters.

“We will be consulting closely with NATO allies and partners in the days ahead… about whether there are other steps that we should take as an alliance to strengthen our defences, strengthen our resilience, strengthen our capacity,” he added.

Blinken also referred to the alleged coup attempt in Kyiv, which Ukraine’s President Volodymyr Zelenskyi had recently warned over. The president had labelled it as an example of something that would fit into typical Russian “script in Moscow’s playbook of “creating a provocation and using it as a pretext for interference”.

Addressing Eastern European concerns about the security of NATO’s Eastern flank, Blinken raised expectations that military support of the countries could be potentially increased.

Over the next two days, NATO foreign ministers will discuss whether “there are further steps that we as an alliance should take to strengthen our security,” Blinken said.

“Our commitment to Baltic security and Article 5 is rock solid,” he added.

Before the meeting, Latvian Defence Minister Artis Pabriks told Reuters there would be a “need for additional international support”.

“We would like the United States to have a permanent presence in our country,” Pabriks said, which according to him would primarily mean the deployment of the Patriot air defence system.

Last week, Polish President Andrzej Duda had called for increased “strategic surveillance” of the region through increased NATO air policing, which has been already taking place in the Baltic States since 2014.

NATO currently has so-called battlegroups in Poland, and the three Baltic States, which rotate regularly and are each comprised of around 1200 soldiers.