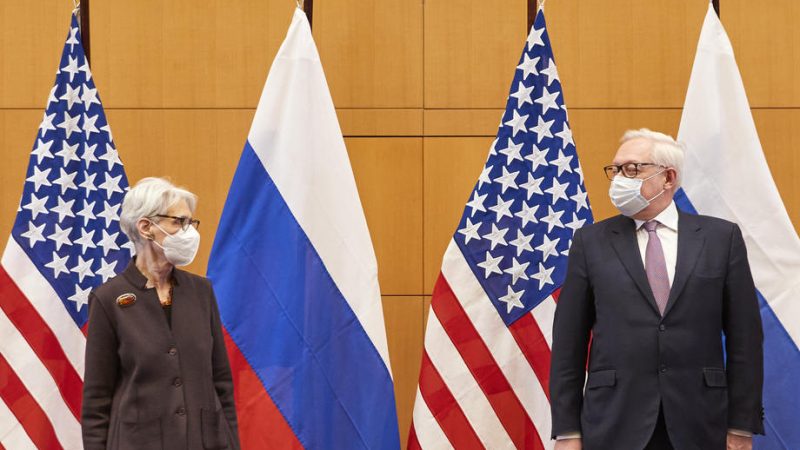 The talks were the first in a series of meetings expected this week, scheduled amid fears of a Russian invasion of Ukraine and wide-ranging concessions asked by Moscow from Washington and its NATO allies over Europe’s security future architecture.

In December, Russia published a proposal for two agreements with the United States and NATO respectively, that would limit Western military activity in Eastern Europe, re-establishing a Russian ‘sphere of influence’ in its former Soviet republics.

In his remarks, Ryabkov demanded hard guarantees that Ukraine and Georgia would “never ever” join NATO, while Sherman flatly rejected this and some other proposals as “non-starters for the United States.”

“We will not allow anyone to slam closed NATO’s open-door policy,” Sherman said in a phone briefing to reporters.

Moscow insists that the West broke a given promise by allowing former Eastern bloc countries like Poland and the Baltics to join the Western military alliance.

Both sides tamped down any expectations for a diplomatic breakthrough as they separately acknowledged that talks on some key issues were doomed to fail, and the process would involve open-ended engagements without setting rigid deadlines.

Sherman in her remarks to the press offered a gloomy, long-term perspective for talks.

While the US was willing to talk with Russia about missile deployments and on nuclear arms control, as well as to discuss limiting the scope and scale of military exercises, there would be the need for a pullback in forces as a step toward any future agreements, she said.

One possibility floated by the Americans would be a revival of the Intermediate-Range Nuclear Forces (INF) Treaty, which Washington abandoned in 2019 under the Trump administration, after years of accusing Russia of violating its terms.

Today I led a U.S. interagency delegation to Geneva for an extraordinary session of the bilateral Strategic Stability Dialogue with the Russian Federation. We urged Russia to commit to the path of diplomacy. https://t.co/kF8DGhLzgN

Ryabkov said the matter called for a quick resolution.

“We are not talking about months or weeks, we need quick response,” Ryabkov said, though admitting that Russia hoped for a declaration at a NATO summit scheduled for late June in Madrid.

Moscow said it wants a cast-iron guarantee that Ukraine will never be allowed to join NATO because such a move would pose a serious threat to Russian national security.

“We underscore that for us, it’s absolutely mandatory to make sure that Ukraine, never, never ever becomes member of NATO,” Ryabkov said.

Sherman said Russia offered no proof it would not invade or any explanation for why it has deployed some 100,000 troops towards the Ukrainian border.

The US side told their counterparts that any invasion would be met with “significant cost and consequences well beyond what they faced in 2014” when Russia annexed the peninsula of Crimea from Ukraine, she said.

Though any direct military action by the US or NATO in defence of Ukraine is unlikely, measures could include sanctions against key financial institutions, export controls, “enhancements of NATO force posture on allied territory” and increased security assistance to Ukraine, she said.

Sherman said Russia must decide if it genuinely wants a diplomatic solution, and called out the Kremlin for its prior attacks on Ukraine.

“We explained to our colleagues that we have no plans, no intentions to ‘attack’ Ukraine,” Ryabkov told reporters. “There is no reason to fear any escalation in this regard,” he added.

He said the Russians had told their US counterparts “that all measures for the combat training of troops and forces are carried out within our territory” and that there was “no reason to fear any escalation scenario in this regard”.

“We’re worried … [about] possible provocations on the part of Ukraine, deliberate provocations on their own or in concert, in cooperation with like-minded countries in the West, like the US and others, the UK included, that may create a situation where the probability for some clashes will grow,” Ryabkov said.

The fate of future talks would depend in part on progress on the issue, Ryabkov told a news conference in Geneva.

The Russian official, though denouncing US threats as “attempts at blackmail and intimidation”, however, noted that in his opinion the US side “took Russian proposals very seriously” and that Moscow was “for the continuation of dialogue”.

A meeting of the NATO-Russia Council is set to take place in Brussels on Wednesday (12 January), followed by representatives of the Organisation for Security and Cooperation in Europe (OSCE) meeting in Vienna on Thursday (13 January) on the same matter.

NATO Secretary-General Jens Stoltenberg earlier on Monday lowered expectations for the meeting, adding the best outcome could be a deal to simply hold more meetings in the coming months.

“I don’t think we can expect that these meetings will solve all the issues,” Stoltenberg said, after separate talks with Ukraine’s Deputy Prime Minister for European and Euro-Atlantic Integration, Olga Stefanishyna.

“We will listen to Russia’s concerns, but any meaningful dialogue must also address our concerns about Russia’s actions [in Ukraine],” Stoltenberg added.

US State Department spokesman Ned Price later said not to expect “any breakthroughs could be achieved or really even contemplated” in the week’s talks.

Europe not at the table

The Geneva meeting took place without the participation of Europeans, prompting reassurances from Sherman and other US officials that Ukraine, Europe and NATO would be included in any decisions.

EU’s chief diplomat Josep Borrell earlier on Monday (10 January) said he believed a Russian invasion was still possible, repeating that he received assurances that nothing would be agreed without the EU’s “strong co-operation, co-ordination and participation”.

“It is our own fault, not an American one, if Moscow discusses European security bilaterally with the US,” Wolfgang Ischinger, chair of the Munich Security Conference, commented.

“We love to chat about learning the language of power, but we lack all the basic implements of power: military capabilities, a strategic vision, and political will,” he added.

EU foreign and defence ministers will meet informally later this week in the French sea-side city of Brest, with the issue likely to feature high on the agenda.